Can Shooting Cause Brain Damage? The Science, the Bad News, and the Solution 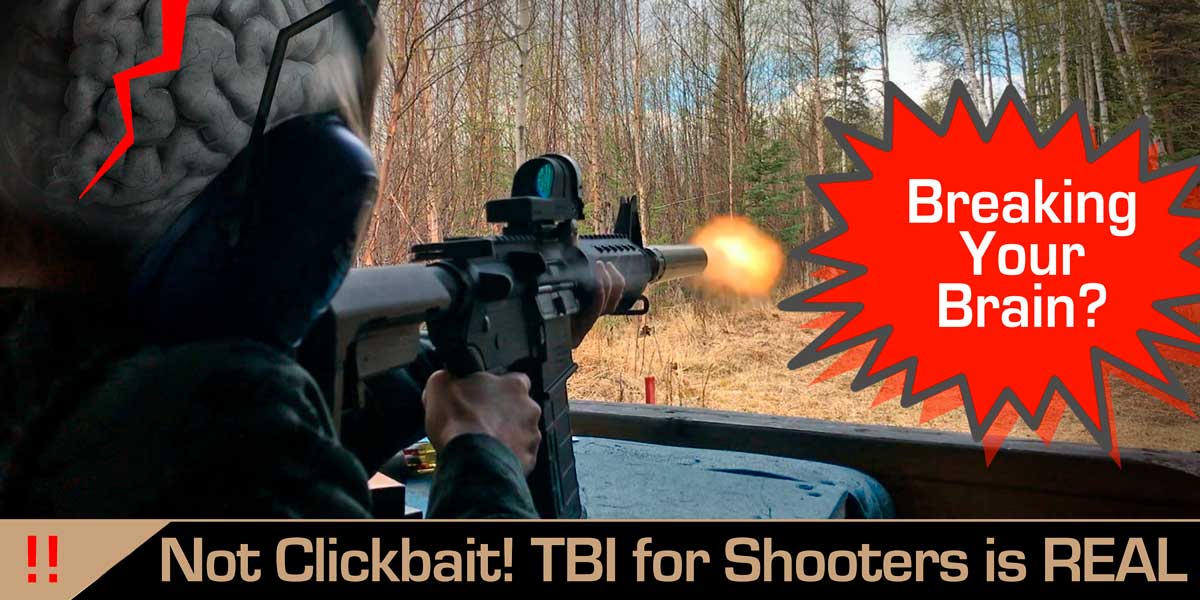 Personal protective equipment is necessary for many activities. We wear seat belts when we drive, helmets when we ride. Power tools require safety glasses.

But one vital piece of protective equipment is often overlooked.

This was painfully driven home to me again just yesterday at an informal shooting event.

We were on a small private range facility, and I was on an open short range assisting kids with shooting some pistols and .22 rimfires. After some time we moved to the rifle range.

This range consisted of a narrow lane and two shooting positions housed in a little plywood shed barely big enough to wrap around the bench inside. A window opened to provide a firing port at the front, and a door allowed admittance at the rear.

I brought an 11.5″ AR pistol for the kids to shoot. I sat at the bench and zeroed it, then closely supervised my youngest son as he began to shoot.

All went well until another shooter entered the shed with a 16″ 5.56 rifle. He fired a shot and in the enclosed space the noise and concussion battered us. Naturally focused intently on my son, the other shooter fired several shots before I recognized the feeling. My son pulling triggers from this tight spot.

I can best describe it as a bruised feeling inside my head, and a growing awareness that thinking is becoming a little more laborious; concentration begins to require more, well, concentration.

Continued exposure brings slight confusion and feelings of frustration. Above all is a feeling that something is hurting me inside my head. I instinctively feel a need to protect my head.

Several years ago a buttstock strike to the side of my head, some bombs exploding in close proximity, and a brick thrown from a third story balcony left me with Traumatic Brain Injury (TBI). This is a photo of a bomb that rattled my brain bucket. Another soldier happened to catch it on film. Notice the dust raised across the ground from the initial blast waves. I was just on the other side, hidden in the dust.

Traumatic Brain Injury is More Common Than You Think

Children and teenagers are especially susceptible to brain injury from concussions; at certain stages of development they are extremely susceptible, as are people with existing TBI. This boy loves shooting, but there’s no way I want to put him in a position that could cause TBI.

By 2007, head injuries became the most common injuries for which soldiers are treated. The military has records of nearly 380,000 soldiers who suffered TBI in combat, but many estimate the true numbers are over double that figure.

Brain injuries remain underreported in the military due lack of diagnosis, soldiers and leaders who are ignorant about the severity of these injuries, or who focus on the mission and do not report the injury or seek treatment.

Most significantly, little was understood about the compounding effects of low-level blasts over time.

Researchers use a number of methods to research the primary effects of blast waves on the brain, including transferring the primary blast wave to mice and rats through a membrane in a tube, while protecting the animals from secondary or tertiary effects. It appears that rather than suffering a single blow during a TBI event, a person is absorbs a series of shocks within milliseconds. At least one writer describes the effect as to getting punched repeatedly by a boxer in less time than it takes to blink.

This makes sense to me. Today I am an explosives engineer, I do blasting for construction and demolition, seismic exploration, navigation hazard removal, slope stabilization and re-routing water flow. When I film blasts in slow motion (slow enough to see individual charges go off within milliseconds of each other) the camera shakes as if from successive blows. But when it shakes the real evidence: After the charges begin to fire and before the secondary effects of the blast could reach the camera.

I have also seen this effect from slow-motion filming of firearms with muzzle brakes.

TBI and Trigger Pullers – The Science

Several years ago, some Israeli special forces personnel told me that the IDF was reconsidering the fielding of .50 sniper rifles due to determining that they were causing TBI among their snipers.

A 2018 Center for a New American Security report along with several other DoD studies have determined that training with shoulder-fired weapons and large-caliber rifles is leading to measurable brain injury in some soldiers:

“DoD studies have also found higher rates of concussion and post-concussion associated symptoms among individuals with a history of prolonged exposure to low-level blasts from breaching and shoulder-fired weapons.”

Twenty-one percent of pigs in an animal study exhibited hemorrhaging in the brain after being exposed to the concussion from 3 shots from a .50 BMG caliber rifle.

How Much is Too Much?

How much blast overpressure is too much? It turns out no one really knows. The only thing experts can confidently say regarding TBI and overpressure levels is this: They occur at levels much lower than anyone previously understood. According to a National Geographic article by Oliver Payne:

“So exposure to five psi will rupture your eardrums, fifteen psi will damage your lungs, and so forth. The astonishing thing? The brain isn’t even mentioned on these conventional lists . . . . And the blunt truth is, no one knows… We only know that it’s a lot lower threshold than used to be imagined. There’s a lot of evidence that repetitive exposure to relatively low-level blast is damaging . . .”

Much of the military concern is about .50 sniper rifles. This is a weapon I was issued in the military, but I will no longer shoot one or be near someone shooting one unless it has a suppressor. 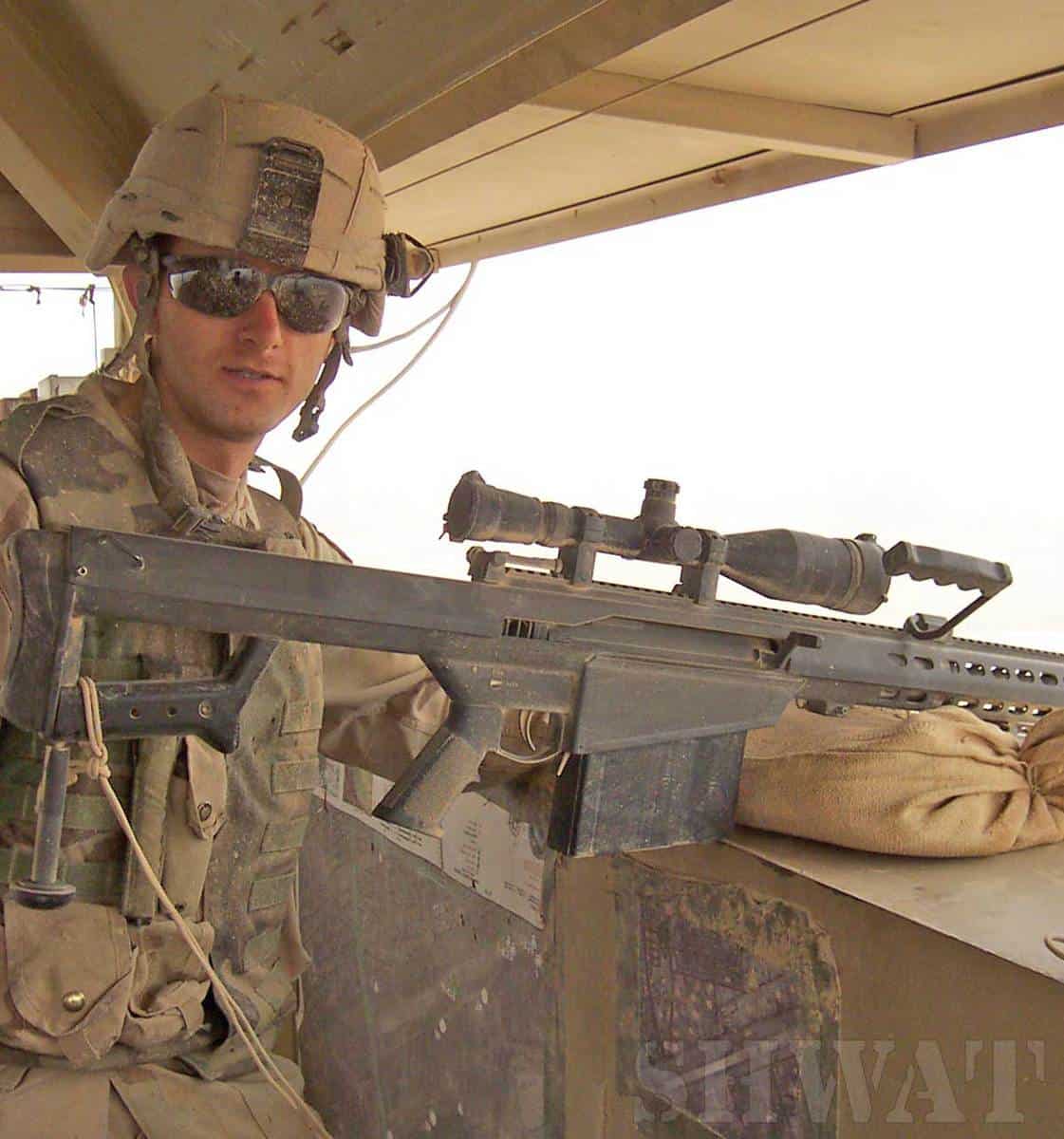 Me with my Barrett XM107

It’s Not Just the .50 That is Dangerous

I can feel when something is affecting my brain. I imagine I am sensitive to it due to my existing injury. But .50 caliber rifles are not the only firearms that cause this effect for me.

I experience this when instructing or filming students who are shooting next to walls or in confined spaces, especially when the caliber is 5.56 with a 16″ or shorter barrel. The same is true when around a 16″ barreled .308, most severely with a brake or certain flash hiders.

One offender is very short AR-15s, which have widespread popularity. They are short, light, with low recoil, but shooting one is akin to having a flashbang go off in front of your face.

So if a 16″ barreled AR in an enclosed space rattles my fillings, I must be severely brain injured to purposely bring an AR with an 11.5″ barrel into that situation, right?

Prior to leaving the house with my boys yesterday, I grabbed an essential piece of personal protective equipment and put it in my bag. Quickly spinning the flash hider off the barrel, I replaced it with a threaded adapter and headed out the door.

At the range, I pulled out a Bowers Vers 30 suppressor and spun it on prior to shooting. The Vers 30 is a 30 caliber can that I use for 6.5 Grendels and .30 caliber rifles. With interchangeable inserts, I can thread it onto any rifle with a .30 caliber or smaller bore.

As long as we shot suppressed, the experience proved pleasant. Adding an unsuppressed AR to the mix made it unpleasant for everyone, including the other shooter.

A suppressor provides superior recoil reduction while protecting the shooter from noise and blast. You can tame the recoil on that magnum caliber rifle by making it excessively loud with a brake, or by making it quiet with a can.

My eight-year-old son, who weighs 41 pounds, was happily blasting water jugs apart with a .50 Beowulf AR pistol. He suavely handled the recoil tamed by a Bowers Vers 50 suppressor. Short barrels, muzzle brakes, heavy calibers, and confined spaces, singly or in conjunction, all have the potential to increase the concussion of shooting to a level that could cause cumulative traumatic brain injury.

This isn’t the case with every firearm, every caliber, or every situation. But if you have a rifle creates more than the normal amount of concussion when you fire it, it’s time to put a suppressor on it. Protect your ears and your brain. Living with TBI is no fun. Why risk it?

Payne, Oliver.  “Why Is the Mystery of Blast Force Brain Injury So Tough to Solve?”. National Geographic, February 17, 2015, news.nationalgeographic.com/news/2015/02/150217-shell-shock-ptsd-tbi-world-war-one-ied-veterans-administration-science/