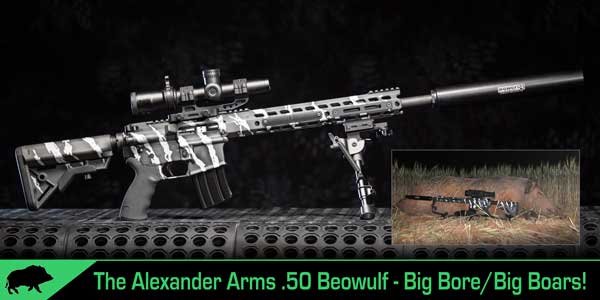 When Jonathan told me that he was bringing the Alexander Arms .50 Beowulf Tactical, I honestly didn’t know what to think. My thoughts flashed back to my high school English class where we read the Old English epic with the same name. In my mind the only similarity between the rifle and the story was that I was very unfamiliar with both. That, and both seemed big and weighty in my imagination. I imagined the pounding on my shoulder that might create, but more on that later.

Now before this hunt even began, I was eager just to get my eyes on this rifle. Alexander Arms had shipped .50 Beowulf Tactical model to Jonathan and he bragged about what a great looking gun they made. I think his exact words were, “This will be the best looking gun you’ve ever shot!” Alexander Arms had done a custom Cerakote job on this rifle that was a dark and light gray tiger stripe. It’s nice enough where someone would want to stash it in the back of the safe for the fear of the most minute scratch ruining the look, but that is not what this piece of art was designed to do.

The standard Alexander Arms .50 Beowulf Tactical is spec’d out nicely enough even without the tiger stripe. SHWAT™ reviewed the original Manticore Arms Transformer rail and I was happy to see it on this gun. Its narrow diameter and light weight compliment the styling. The rifle weight is listed as nine pounds on the Alexander Arms website, but our scale says it’s only 6.8 pounds. A B5 Systems SOPMOD Bravo stock is what the Tactical model ships with and I hunted with. After the hunt the rifle got an Adaptive Tactical EX performance stock, an upgrade very much worthwhile. Alexander Arms includes either a Geissele SSA trigger or their own Tactical Bow trigger at no extra charge.

So yes, we’ve determined that it looks amazing, but can it put some pigs down? Yes, yes it can!

After we sighted in the Pulsar Trail XP38 in the dark (wouldn’t necessarily recommend doing it this way), we headed out to find some swine. I will say that I was glad that I did get to shoot this rifle before we actually got on some hogs because I wasn’t sure how much more it would kick compared to my 5.56. While the kick was noticeable, it wasn’t uncomfortable. The kick wasn’t as soft as my 5.56 but wasn’t as hard as my 30-06.

We climbed into the flatbed truck and drove to the field west of the farm. I don’t know what it is about this 140 acres but the pigs LOVE it. So do Jonathan and I! As we parked on the county road on the west side of the property and exited the truck, we walked the 20 yards to the entrance and I started scanning the field with my Pulsar Helion XP50. At the time, the wheat was a couple of weeks away from being harvested so the height of it was somewhere just above our knees, yet I could see hogs all in the field. With the wheat being this tall, I knew for every hog we could see, there were probably 5-10 that we didn’t, so we proceeded with extreme caution. Now that I think about it, it seems a bit crazy knowing what could happen. The closest group of hogs was just to our south as we started the stalk.

Even though I could only see part of the hog because of the wheat, I knew it was a big one because while most of his body was hidden by the wheat, there was a very large portion of him that was visible through the Helion. As he inched towards us, we got into position, and I patiently waited for a clear shot. I could see his pointy ears poking above the wheat as he inched towards us. I zeroed in on his face. As the moment came, I swept the selector to fire and reached for the trigger. Our Beowulf came with an Alexander Arms Tactical Bow trigger. On their Tactical model, it’s a free $200 upgrade to a standard AR style trigger. It’s not a precision trigger, it’s field trigger with a roughly five pound pull. While you cannot change the pull weight you can adjust over travel and engagement. We left it alone as the break was super smooth. There’s a tiny bit of creep we had to look for to find, but even it is smooth and completely undetectable when actually hunting with it. The trigger shoe is wide enough that using with gloves would be easy.

The skeletonized hammer fell and the Alexander Arms 200g PolyCase® Inceptor™ ARX® did its job. We were only about 50 yards away when I pulled the trigger. I heard the large round hit the target and that that pig just dropped. You’d think a .50 Beowulf would drop a pig with anything close to decent shot placement, but the ARX round is unlike anything else I’ve shot. First off, it looks different. That’s obvious. It’s a lead free metal filled polymer where the channels high-pressure fluid jets as it penetrates fleshy targets. Or maybe brains. This shot hit the hog’s forehead. End of story, right? Not necessarily. Jonathan has seen hog skulls that showed where bullets had glanced off due to the angle of impact on the bone and the hog lived to destroy farms another day. That said the bullet left a big hole as it exited behind the hog’s ear and ripped down the side of the pig another twelve inches. That hog never seemed to have known what hit it. So Jared 1, Hogs 0. I quickly scanned the rest of the field and while the other hogs were startled, they didn’t leave. The Bowers Group Vers 50 suppressor did its job nicely. Think about that, a big bore can that works! If we didn’t have this suppressor, the hogs would have definitely left the field and Jonathan wouldn’t have dropped some with the 6.5 Grendel. And I’d have been deaf as a stump. Well not really, I do have ear pro, but you get the idea. If you can hunt with a silencer you should. Period.

Trying to find this boar, even with my excellent Pulsar thermal gear was a challenge because of the height of the wheat. When we found him, I realized I had a big pig down! There are people that are really good at guessing how much a pig weighs, but I am not one of them. I hate to think how short of a career I would have at one of those “Guess Your Weight” booths at the fair or carnival so I’ve recently started using something called the Pig Heart Girth Weight table. You measure a hog’s girth then consult the table for a corresponding weight.

As I tightly pulled the tape measure around the back of his front legs and the chest, it measured 48.5 inches which is about 285 pounds (+/- 10 pounds). Not only was this a big pig but he was really long. The pig was 17 inches longer from the rear to the snout than the rifle with the 11.25 inch Bowers suppressor! High fives and we headed down the road to look for more feral offenders. As we were humming down the dirt road, I spot a shadow moving across ahead of us. I instinctively knew it was a big boar and accelerated, knowing that we didn’t have much time. Breaking hard, we pulled up to the spot on the road where I think I saw the ghost pig. Jonathan jumped out of the truck with the Pulsar thermal monocular and scanned for the hog. I just knew he was there somewhere but the brush was super thick. I was confident the hog was heading east trying to cross the highway.

I yelled for Jonathon to hop back in so we could try to cut him off. As Jonathan entered the truck, I punched it and we got to the east side of the field. We were in such a hurry that I barely missed the bar ditch. With the truck stull sliding onto the wet grass, Jonathan exited the vehicle again. He was scanning and I leapt out of the truck to assist in locating the pig. With Jonathan to my left and out of harm’s way I raised the .50 Beowulf and looked through the Pulsar Trail thermal scope. There he was, a big boar less than 40 yards from us in some really heavy brush, the kind of brush that is thick enough to redirect a 5.56 round on its way to the target hog.

The hog was well aware of us and headed deeper into the thick cover. I didn’t have much time and didn’t really know what to do so I snorted. Yeah, you read that right. It might have been an oink, and I’m not even sure why I did it. Was I snorting, “Hey good looking!” or “Run for your life!”? I have no idea but much to my surprise, the hog froze for a half second allowing me to put a round of the Inceptor ARX in its neck and the pig dropped instantaneously. While this boar wasn’t as big as the first one I killed, he was still a pretty big dude. Just like earlier in the evening, I pulled out my measuring tape and tightened it across the back of his front legs getting a 43 inch measurement. That’s about 230 pounds. Jared, 2. Hogs, 0. 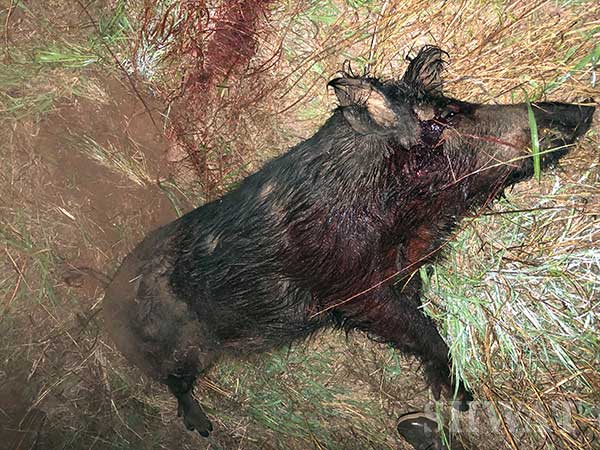 This pig seems to have bled more in less time than anything I’ve ever shot. That’s not really scientific of course. We don’t measure blood volume, but if loss of blood and pressure is key to terminal results, the .50 Beowulf with this ARX ammo looks like a master key to me.

Clearly the Alexander Arms .50 Beowulf® Tactical is effective, not to mention the thrill factor of running the big bore rifle! Combined with the Pulsar Trail XP38 thermal scope and the Bowers Vers 50 Suppressor it makes for one impressive kit! The gun was light enough that I carried it for a good portion of the night as we marched through the wheat fields. It also dropped two big boars on two shots and Jonathan was right, it was the best looking gun I ever shot. I still don’t remember anything about the old story of Beowulf but this Beowulf was a beauty and a beast.