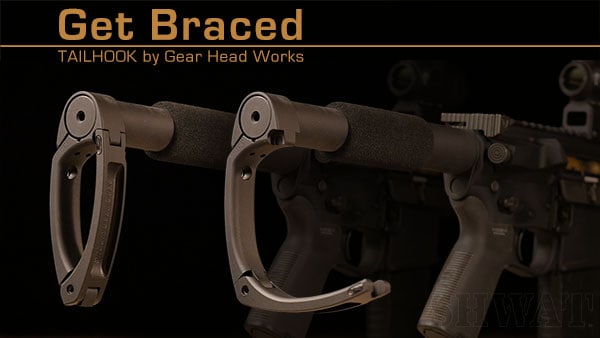 The Gear Head Works Tailhook pistol brace is without a doubt innovative and exciting. If only I’d have thought of it! I did think to make a one minute video showing you how to install and use the Tailhook! Once I was a hater of AR pistols and other neutered platforms, but then I became a crow eating evangelist for them. Same for fun guns like the KRISS Vector, CZ Scorpion, etc. I’ve since enjoyed the Sig Tac brace and the Blade by Shockwave, but the Tailhook brace plays at a whole different level.

Generally speaking, an aircraft tailhook is designed to be quickly deployed to secure an aircraft when landing or during engine testing (interesting side note, many Air Force planes have tailhooks). The hook is retracted when not needed and drops into position when called for. The Tailhook pistol brace (aka “arm brace”) follows the same idea.

I see a lot of things come through the shooting/hunting industry that make claims such as “innovative” and “game changer” but in the case of the Gear Head Works Tailhook brace these accolades are facts. It is faster and simpler to use than my Sig Tac braces, stronger and more effective than the Shockwave. It comes in three configurations to suit your preferences.

How the Tailhook Brace Works

When viewed from the rear, the Tailhook brace is a five and a half inch long ellipse formed from two halves joined by a hinge at the bottom and a push button latch at the top. One side attaches to the buffer tube. When the release latch is pressed the other side drops, rotating downward 90 degrees forming an L shape instead of the ellipse. The lower arm of the L shape goes under your forearm providing support and stability to the shooter. The still vertical side of the Tailhook L sits against the inside of the forearm mitigating side-to-side movement. Because the L shape rests with the concave sides of the ellipse arms against your forearm it is quite comfortable. This combination offsets the weight of the firearm a lot better than anything else I’ve seen. When used as designed, better accuracy with less fatigue is the immediate payoff.

All three Tailhook models are rigid. Mods 1 and 3 are machined aircraft grade aluminum while Mod 2 is injection molded. For the moment Mod 1 is my personal favorite. This might be because it’s the one Gear Head Works sent me first, or maybe it’s because I’m in love with its simplicity.

The Gear Head Works Tailhook Mod 1 is the simplest of the three. Machined from billet 6061 aluminum and hard coat anodized, it just clamps to a round pistol buffer tube or any round adapter with an outside diameter of 1.17-1.20 inches. That’s it – two screws and it clamps on solidly! Because there is no defined front and back, it is configurable as either right or left handed and can be switched from one to the other. A limited rotation QD sling point is machined into the stationary side of the ellipse that attaches to the buffer tube. Mod 1 weighs 4.5 oz and will be priced at $125 or less. The Tailhook Mod 2 is injection molded using reinforced polymer and telescopes much like a typical AR15 stock. This allows for more compact storage options and allows shooters match their arm length to the brace. Five locking positions create 2.6″ total travel, from 10.125 to 12.75″. This model Tailhook comes with a castle nut, receiver end plate and proprietary buffer tube that prevents a rifle butt stock from being mounted. This keeps the ATF happy. The Mod 2 should weigh 7-8 oz, though I’ve not had a chance to weigh one myself. The first production run is in black and tailored to right handed shooters. FDE and OD Green versions, will follow. (Perhaps a left handed model will, too, but don’t forget Mod 1 is user configurable as a left or right handed version.) Estimated price point is under $200.

The Mod 3 Tailhook brace is another telescoping model. Made of machined aluminum, it has the added flexibility of a PDW design. Like a number of PDW style stocks on the market, the Mod 3 Tailhook attaches to a pistol configuration via two rails. As of this writing I’ve not hand a chance to handle Mod 3 but I will soon.

In addition to AR pistol variants, Gear Head Works has installed Tailhook braces on the KRISS SDP, CZ Scorpion, Uzi Pro, and an HK MP5 (full size telescoping A3 style). Some yet to be disclosed gun manufactures will offer the Tailhook brace as an OEM option on some of their pistols. Some call devices like the Tailhook an “arm brace” while others call it a “pistol brace.” In my opinion, it’s a pistol brace as it stabilizes the pistol, not your arm that is presumably attached to your body.

As you can tell, I’m pretty excited about this new brace and think you will be, too. Just messing around with it makes me think of new uses for versions of Tailhook devices. For example, how could the design be adapted to secure my mountain bike in my jeep?

It’s worth noting here that Gear Head Works is not a new company. If you own a Tavor, AUG or CZ Scorpion, you may already have parts from them. I reviewed their Tavor FLEx swivel a while ago.

So when and where can you acquire your own Gear Head Works Tailhook brace? Soon, but not yet. Production is in progress so your best bet for notification would be through social media or our newsletter. Mod 1 and 2 are slated for 2nd quarter 2017 releases while Mod three won’t drop until late 2017.

Questions? Thoughts? Hit us up in the comment section below, no login required.