Still Worth It? A 2020 Silencerco Sparrow Review 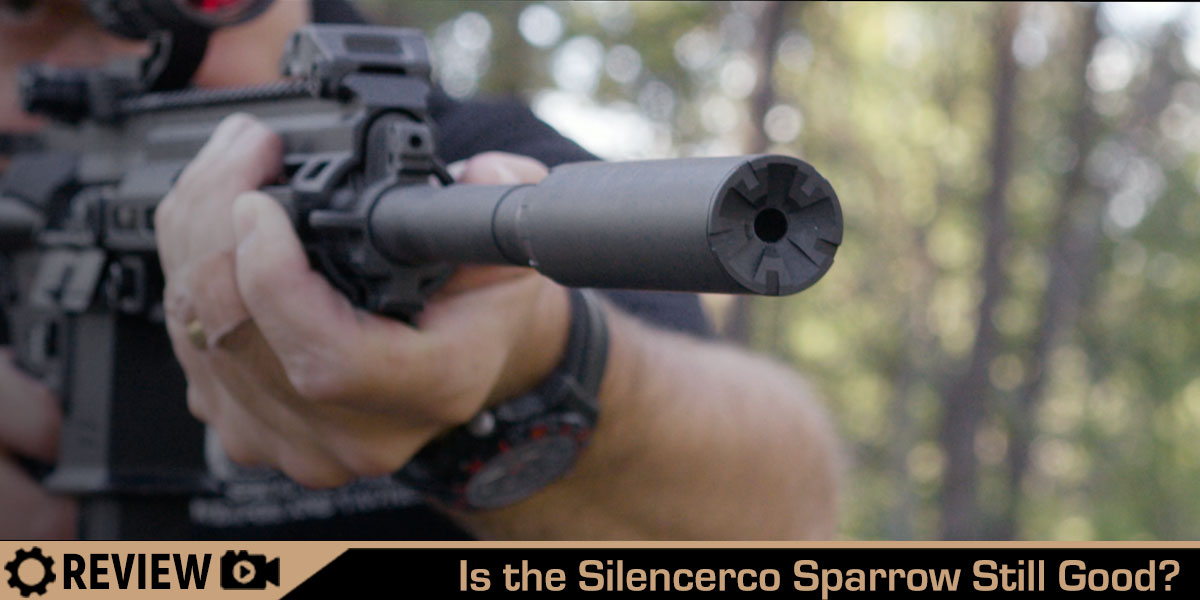 It’s 2020, twelve years since the first Silencerco Sparrow reviews accompanied the launch of this .22LR suppressor. Not coincidentally, the Sparrow is the first can Silencerco launched, the beginning of the suppressor industry juggernaut from Utah. Countless .22 silencers have been launched since the Sparrow, yet it remains in production today (even though Silencerco themselves now have two other .22 cans!). While I don’t have any insider info on sales numbers, I imagine they are pretty solid or the Sparrow would have been retired by now. So where does that put the Sparrow today? Here are our opinion and review, all tied together in video as well.

How Quiet is Subsonic .22LR?

The Silencerco Sparrow in reality is a multi-caliber can. No shocker there, of course. The big headline might be that it’s rated for full auto .22LR use. Can you imagine? I mean, .22LR is so much fun to shoot! I’d love to shoot some melons with full auto, wouldn’t you? Well, I don’t have a .22 full auto to play with, so we’ll take Silencerco’s word that it works as advertised.

In my opinion, it’s really hard to beat the sheer fun of shooting suppressed subsonic .22LR. In the video, you’ll see and hear what one of our Pro Staffers call “stupid quiet” performance shooting Norma Ammo through the Sparrow. And that’s using an HK 416 .22 rifle. The action is the loudest thing you’ll hear in the video. I don’t pretend to have a $20k sound meter and don’t trust iPhone apps to emulate that very well, so we’ll just leave it at “stupid quiet” as the noise rating for subsonic .22 ammo with the Sparrow.

How Does .17 HRM Sound Through the Sparrow?

When we filmed the Sparrow review, we just rolled as we shot and you get to see our discoveries as they happen. After the subsonic .22 shooting, we pulled out a .17 HMR rifle from Alexander Arms. It’s an AR pattern rifle that we’ll review separately, but it’s a ton of fun and a unique product for the .17 HMR round. Since it’s launching rounds at roughly 2.5 times the speed of .22 subsonic we’d been shooting, we’d expect it to be a bit louder. And I expected more noise from the ejection port.

As you’ll see from my reaction in the video, it’s louder. I’d say louder than I expected, but since I didn’t have any specific point of reference beyond the .22 subs I’d just been shooting, I didn’t really have a sound basis for any expectations. See what I did there?

Either way, while the .17 HMR proved louder, it was still quite comfortable. I can easily see where the combination of the caliber and the Sparrow would make for a great small animal hunting combo. I’m paranoid about hearing protection, and still would have no issue with this combo.

What Other Calibers Will Work With the Sparrow?

The Silencero Sparrow is a versatile can, and while I think .22LR and .17 HMR would be the most common rounds used with it, let’s look at some other interesting options.

The .17 WSM is a faster load that can also manage some heavier bullets. That might make it a better choice for fox or even coyote sized game. The Sparrow will happily join that party.

Back in the land of not-so-common .22s, the Sparrow should play well with .22 Mag, .22 WMR, .and 22 Hornet. I’m not set up to test these, but given the performance from the .17 HMR that you can see and hear in the video, I imagine these less common .22 caliber rounds would be somewhat similar in their report.

How Hard Is It to Clean the Sparrow?

The Sparrow is a stainless steel can. So, yes, it’s durable and rated for 2000 rounds between cleaning. Cleaning of rimfire cans is a big deal, and the Sparrow is one of the easiest cans to deal with on that point. As you’ll see in the video, both end caps are removable allowing you to easily access the monolithic core. Silencerco calls the sleeve holding the core their “Multi-Part Containment (MPC)” sleeve. Yep, that’s patented and trademarked. It’s a big deal because according to Silencer Shop, it’s “insanely easy to disassemble/clean” the Sparrow.

For those looking for Sparrow specs, here are a few more. The silencer is five inches long, neither the longest .22 can available, nor the shortest. At 6.5 ounces, it weighs about the same as a couple of decks of cards. It comes in a typically nice Silencerco box with a 1/2×28 Rapid Attach adapter. It’s round. It’s black. There’s not a more to say, really.

Silencers are game-changers. If you’re new to shooting, the video will really show you how they protect both the shooter and others in the vicinity from hearing damage and social screw-ups. The Sparrow remains a competitive and very quiet can (relatively speaking, of course), despite its age. Now priced at $375, the Sparrow is a great value as well. Check out the video below, we cover more in it.