Introducing the Silencerco SCO15 Lower – Do We Need Another AR-15 Lower? Across the web, about now publishers are pushing out a press release. The Silencerco SCO15 lower receiver is just being announced. That, of course, begs the question, “Do we really need another AR lower receiver on the market?” Unless you’ve been living under a rock and are unaware of the plethora of AR lower receiver makers still in business, the clear answer is “No.” However, if we ask the wrong question, we get the wrong answer. So let’s look at this new receiver for what it actually is.

As a general rule, here at SHWAT™, we don’t bother publishing press releases. Anyone and everyone in the gun industry seem to play that game. We like to bring you original content based on our actual experience. That takes a megaton of relationship building. Off and on for years with the folks at Silencerco, we’ve always valued how they brought silencers into the mainstream of shooting and hunting. So when I got a call asking if I’d like to get my hands on the yet-to-be-announced Silencerco SCO15 lower receiver, I of course said, “you bet!”

Still, what would Silencerco bring to the table that hadn’t been done already? Would anyone beyond Silencerco collectors (aka, Fan Boys, etc.) give a crap? The later remains to be seen, but let’s start here with a first look at the SCO15 lower.

If you made it here, then you’ve already seen my SCO15 image at the top of this story. Obviously a billet lower receiver, it looks good. I’ll go one further. I think the SCO15 lower looks great! But that hardly sets it apart, not to mention that statement is 100% subjective. But since I’m writing I get to give my opinion. Fair enough?

Machined in house at Silencerco in Utah from 7075 Aluminum and then Type 3 hard anodized, the SCO15 looks spring from some clear design intentions and functional priorities. The enlarged integral trigger guard looks good. The flared magwell looks nice, and we’ll get back to it in a moment. The machining is excellent. The markings (Logo, serial number, etc.) are close to perfect. Most billet receivers have all this in common. So we’re still looking for something that sets the SCO15 apart. After all, I could swap out the model name here for a number of others from different manufacturers and all this would still apply.

Beyond the SCO15 Magwell So, about the magazine well… Yes, lots of billet lower receivers have flared magwells. They add some eye candy for those who care, but more importantly, a flared magwell like that on the SCO15 makes loading a mag into the lower easier. If you’re in a hurry as a hog hunter, competitive shooter, or zombie-slaying defender of all that is good and righteous, that flared magwell gives us some literal wiggle room as we reload. That’s a good thing.

But once the mag is inserted into our lower, we could kind of care less about the magwell. What we care about is magazine function. I didn’t have time to build an AR with the SCO15 yet, and I don’t own mags from every manufacturer out there. I probably can’t even name all the mag makers on the planet. Rather than simply publishing Silencerco propaganda, I called and spoke with a member of their design team. I’d mention his name, and maybe I will update this with it, but I was traveling through the Rockies and dopped the call before getting permission to share it. He told me that getting the receiver to properly accept, hold, and drop virtually every known mag was more difficult than expected, but done. I’m sure other manufacturers have done the same thing, but I’ve never confirmed that with any of them.

For what it’s worth, I’ve test fit some of my mags and they seem to fit as you’d expect. So far, so good, right? As a personal preference, I’m a huge fan of QD sling cups on ARs. If you are too, the ones machined into the Silencerco SCO15 lower receiver will make you smile. You’ll find one on each side of the SCO15, thus the “Ambi” designation. Located at the rear of the receiver, the QD cups are of the “anti-rotation” variety. This is one of the places we see that Silencerco didn’t cut corners. These cups get machined into the original raw material, the billet aluminum block. It would have saved time and wear on the machine tools to have made these cups without the anti-rotation stops. But Silencerco did it right here.

I just said, “I’m a huge fan of QD sling cups…” Upon reflection, that’s only partially true. I hate sling cups that rotate freely. In my experience, that simply is a guarantee of frustration as your sling ends up in a twisted mess. No thanks.

The SCO15 QD sling cups stop rotation at a quarter turn. Exactly as it should be. But there’s one thing I hate even more that QD cups without hard stops: QD cups that don’t hold the sling. They are the worst. Ever had one release your sling due to poor manufacturing tolerances? I have, and it sucks. I tested the SCO15 QD cups with slings from Armageddon Gear and Viking Tactics. I yanked and pulled and the Silencerco receiver simply wouldn’t let go. Color me satisfied. 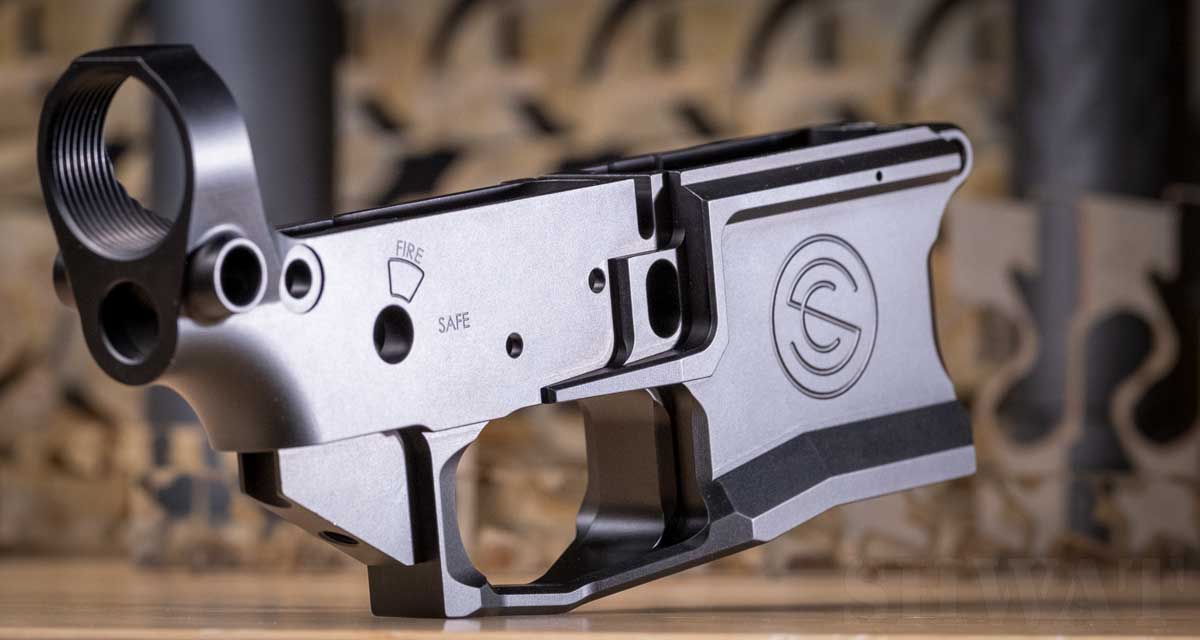 If selector lever indicator markings can be ambidextrous, these are. That is to say, the SCO15 Fire and Safe markings can be found on both sides of the lower receiver. Not everyone cares if they have ambi safety selectors, but I prefer them. A right-handed shooter, I don’t spend a lot of time shooting like a lefty, but I like the option of going from Safe to Fire with my right thumb, and Fire to Safe with my right index finger. I imagine someone is going to take issue with that in the comments, but you do you.

I also prefer short-throw levers, and the SCO15 markings use a “window” to allow both those and the traditional 90-degree levers to correctly indicate whether the selector is in fact in the Safe position. 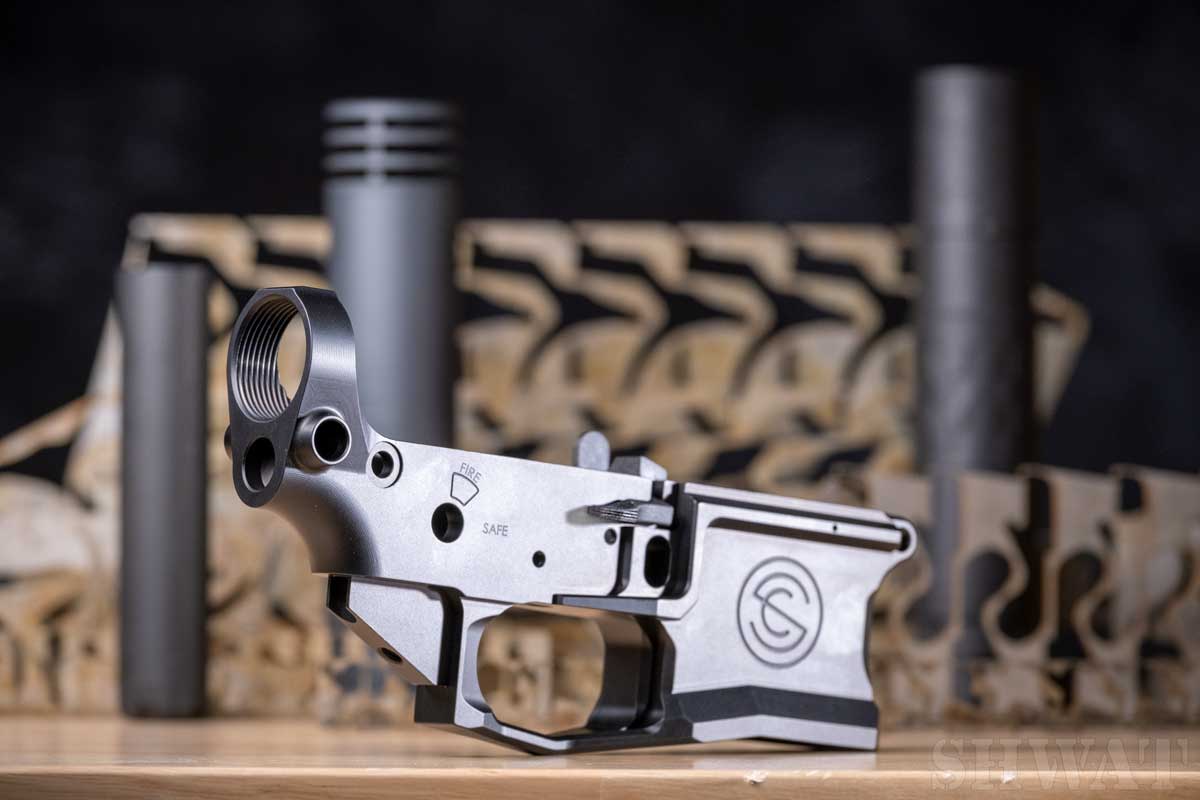 The most unique inclusion on the Silencerco SCO15 lower receive must be its proprietary ambidextrous bolt catch/release. Since it is proprietary to the SCO15, it’s a good thing they include it with the lower. The design is simple that should be a good thing. As I said, I’ve not had the time to build an AR with this lower but stay tuned, I have plans… I did test fit a grip and will venture the following.

First, I’m a huge fan of the concept. I love the way an ACR lets me release or catch the bolt with my right index finger. The SCO15 bolt catch/release is much higher, ergonomically speaking. As a bolt catch, I expect it will be easy, even natural, for me to use. As a release, I’m not certain. I can reach it just fine, and maybe if I had average length fingers (longer) I might not question the design. Regardless, until I run it on a built AR I simply won’t know. It’s a bummer not to give you something more concrete here, but we try to maintain transparency and authenticity with you at SHWAT™, so that’s where I have to leave it.

Final thoughts on the Silencerco SCO15 Lower Receiver (For Now)

The SCO15 is a well thought out good looking receiver from a company who’s only other gun at the moment is the Maxim 9 integrally suppressed 9mm pistol. How’d they do? Well, you can easily build an AR using the SCO15 lower with a standard mil-spec lower parts kit and buffer assembly. I’d drop in something like a Timney Targa trigger in as shown in my old video. The receiver will accept a rear tensioner bolt if you want to eliminate movement between the SCO15 lower and whatever upper you use, though the bolt is not included with the lower.

Silencerco obviously knows how to make suppressors, from the bigger bore Omega 36M to the sweet little Sparrow. Now they are an AR lower receiver manufacturer and the SCO15 honestly looks pretty great to me. But did we, the shooting public at large, need another lower receiver option? Not really. But would I buy the SCO15 over any number of other options for an AR lower? Totally. And for some, the cool-factor of having an AR branded to match your silencer will prove simply irresistible.

With an MSRP of $249, the SilencerCo lower is available for purchase now exclusively at Brownells, Capitol Armory, and Silencer Shop.

I’m looking forward to a follow-up story as I build an AR with the Silencerco SCO15. Any suggestions for that build? Drop them in the comments.