Mr. & Mrs. Smith’s Christmas, or “How to Get the Gear You Really Want for Christmas This Year” Recently SHWAT™ got a Facebook message asking for advice. Seems Mrs. Smith (No, not from the movie Mr. & Mrs. Smith) wants to give her husband a gift based on reading a number of our stories. Honestly, that kind of made my day! That’s why each year we wait until AFTER the 400 million Black Friday/Cyber Monday/Gift Guide emails to your inbox have slowed before presenting our annual guide. We actually think you might want to open and read it.

Mrs. Smith didn’t tell us how she found SHWAT™, just how helpful it proved in guiding her choices for Mr. Smith. Did she find us via a Google search? Maybe. Did Mr. Smith forward her one of our free email newsletters? Possibly. Either way, it seems Mr. Smith will have a great Christmas morning!

So do we really need a feature story, “How to Get the Gear You Really Want for Christmas This Year” to satisfy the question? We could just say, “Get it yourself!” Some undoubtedly do. But that might be a killjoy for people on both sides of the gifting equation, you know, like Mr. & Smith. The answer? May I suggest sharing this story via your own social media and adding to it in the comments below?

Our suggestions are all vetted, tested by SHWAT™ writers and good to go. Ready? Here we go with our 2017 suggestions for gifts from high end to entry level… When you want to give the very best… From Pro Staffer Jared Hilton – Within the first 30 minutes of leaving the house Jonathan says, “Hogs on the right!” They are about 300 yards away but we slowly roll the truck in neutral further east on the desolate county road to get closer. We exit the vehicle and I peek for the first time through the REAP-IR at our hogs and it is glorious. The image I’m looking at is UNBELIEVABLE. The picture is so crisp and clear that I could have counted each individual hair along the back of the hog. If a hair would have been out of place, I would have seen it. The only way I can describe it is to imagine you are looking at a 4K Ultra HD TV for the first time when all you’ve ever had is a 720p TV. The clarity and resolution is something that needs to be seen with your own eyes to believe. As I’m still awestruck by the awesomeness of the thermal, I scan the rest of the 260 acres because there was a chance that other animals were also in the field. No other hogs join the party, but I do see some rabbits hopping off in the distance. It’s pretty remarkable how easily I can detect and identify objects hundreds of yards away with this Trijicon. Read the rest of the REAP-IR story >>> If you’re a run and gun tactical hog hunter, you’re in and out of vehicles, running across fields, maybe blasting down dirt roads or across fields on an ATV. What you don’t need is your rifle banging your knees as you run or getting hung up on your vehicle. These bullpup rifles are a mere twenty-six and half inches long, just long enough to keep them from being restricted NFA items. Yet, you still get a full length 16.5” barrel, ideal for keeping your 5.56 velocity up. In short, it has the ergonomics of an SBR (Short Barreled Rifle) without losing any muzzle velocity while avoiding a $200 NFA tax stamp. Sweet! Read my full story and review of the X95 in 300 Blackout >>> 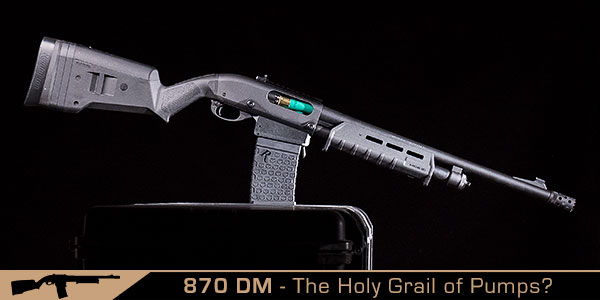 2017 might have been the year of the shotgun, and more specifically, the year of the 870. I don’t know how long people have thought about modifying Remington 870 shotguns to accept detachable box mags, but a few years ago at the 295 Tactical Range in Eugene, Oregon I got to try one. I was excited because I loved the idea from the first time I saw the gun on Instagram. Sadly, it didn’t run very well. And I’m not the only person to conclude that. It turns out that modifying the 870 to reliably feed from a detachable box magazine was harder than it seemed. I’m happy to say it looks like Remington has nailed it with the introduction of the 870 DM. The Magpul MSRP is $799 while the 870 DM Hardwood is only $529. There’s even a TAC-14 model at $559. Watch the video and read the rest of my Remington 870 DM review >>> We haven’t had time to get a full review on this together yet, but let’s start here: Rimfire .22 guns are a blast to shoot! We’re not going hog hunting with one, but they really are fun! The way to make it more fun is with silencers, and according to the info I found at Silencer Shop, the Bowers USS 22 can is the quietest they’ve tested. I’ve just started running Bowers cans, but Pro Staffer Erik Alexander has gotten some trigger time with several of Bowers cans including full auto MP5 fun. Bowers has a plethora of mounts to fit the USS 22 to your host gun and is rated for everything from .22LR, .22Mag, both .17 rimfire rounds, and FN 5.7x28mm. MSRP is $495 but you might find it for less online. For $350 you’d be hard pressed to find a more unique and fun – and even functional – gun. I think I went from mildly skeptical to curious pretty quickly. Then I took delivery and like everyone else started grinning. Why? Because while this is billed as a home or vehicle defense niche gun, it’s really quite a load of fun! I guess we could say the Remington 870 TAC-14 is work and pleasure; or it’s practical fun; or would that be practically fun…? Watch my rather amateurish video and read the better review piece >>> Have someone on your list with a rifle or two or three in the closet? Odds are they could benefit by owning a sweet bipod. Some chance they have one already, but the question becomes one of staying with a VHS era bipod that does what it does reliably, or to jumping to an upgrade with tangible benefits to hunters, shooters and hybrids like me (and probably them). Upgrading isn’t the cheapest thing you’ll ever do, but in the grand scheme of what gets invested in rifles and optics, it’s really not bad. And as you’d expect, the higher price reflects the higher quality. I found this bipod online as low as $242. Check out my not-so-amateurish video and read the full review >>>

This discovery goes back two years now, but still makes me smile. I bet it will for someone on your list, too. Long before this discovery I was using Timney triggers, before I was part of the shooting/hunting industry. But Timney has been making triggers a lot longer than that. Still, it took them 70 years to jump into the two stage trigger business. I’m glad I didn’t have to wait that long. While historically I’ve been a single stage trigger puller, I found I was much more accurate with the two stage Timeny Targa triggers. It seems like a stretch, shaved 38% off group size when I upgraded an AR with one. Watch the video and read the full story >>> If you’re the kind of adventurer who’s HQ is a tent whether hunting, scouting, or just having fun discovering what you can find over the next ridge, you need a sleeping bag. For about three years of adventures now, I’ve been waking up inside a Recon sleeping bag. I’ll share some info here in text and other in the video at the bottom of this story.

Sleeping bag ratings are a joke, unless you understand them. I’ve seen reviews online slamming one brand or another because the bag was cold at the rated temperature. Let’s be real here – can we agree that comfort is subjective? I might be perfectly happy in a cool environment while my wife feels the need to bundle up. So any reasonable sleeping bag rating system must be based on something besides the subjective feelings. Essentially, bags are often rated for some temperature at which you won’t die from cold while inside the bag. That’s hardly a projection of comfort, and a bit of an over simplification. You really need to watch the video and catch the rest of the story to appreciate the Recon sleeping bags >>> If someone you know is into the outdoors – hunting, scouting, camping, overland adventuring – at some point you know they’ll end up in the dark. You know what that’s like. Without lights, they stumble around, drop ammo that never gets recovered, lose your hearing protection, trip over a backpack and knock their teeth out. Don’t let them be that guy or gal. Their favorite tactical flashlight has its limits. This year I discovered a couple of lights from Princeton Tec that are so versatile they’ve accompanied me from Florida to Texas, New Mexico and Colorado. They look different because they function differently: See what I mean in the full review of the Helix Backcountry and Helix Basecamp LED lanterns >>>

So Merry Christmas from all of us here at SHWAT™! We hope our suggestions help guide you (or someone you share this with!) to some great gift ideas here a couple of weeks before Christmas. Now, we don’t exactly have a corner on great gift ideas here. What would you add? Let us know in the comments below, no log in required!