Time to Upgrade from Your VHS Era Bipod to the ZRODELTA DLOC-SS Aimtech Warhammer Bipod? 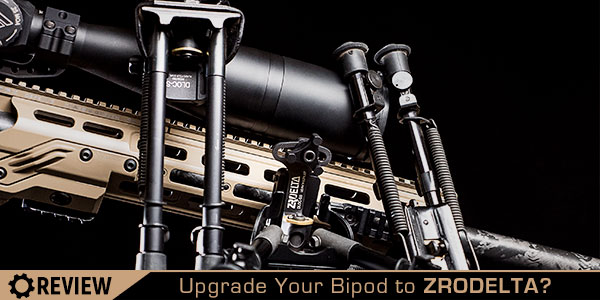 Who doesn’t like watching a great movie? It’s been that way forever and probably all of us have fond memories of watching one on VHS tape. Of course, most of us have moved on from there. It’s not that we don’t like watching movies on our own screens. That will never change. We just have better ways of doing it. When it comes to bipods, we still love the Harris designs for their universal appeal, but the improvements to those designs by ZRODELTA can really pay off. Here we’ll focus on their DLOC-SS Aimtech Warhammer Bipod.

Buried somewhere on the SHWAT™ Youtube channel is a video where I’m just getting acquainted with the DLOC mount system. If you really want to see it, feel free to search. Yours Truly in that video seems a little, well, I don’t know… Amateur? Goofy? Not to mention the full on camo studio! The points I make there are still 100% valid, but I digress. My point here is that thanks to my discovery of the DLOC mount system when SHWAT™ was still in its infancy, I’ve enjoyed watching the design grow and transition. Putting DLOC on a bipod proved a great idea.

I imagine that like many of you, my first bipod was a Harris model. Harris might lack some of the extra cosmetic additions of more recent “tacticool” models, but they remain widely popular to this day. I first used mine on an inherited base model Remington 700 .30-06. That gun became the basis for the “Grandpa’s Gun Reborn” series we did, converting it to a sweet 300 WinMag you see featured here. Modifying my Harris was required to attach it to the pic rail on the new chassis. That’s when I discovered what become known as the DLOC-S.

The DLOC-S kit simply swaps with a few parts on the Harris to give you a DLOC picatinny rail mount and SARG knob (Shooters Adjustable Rotary Grip). The SARG knob facilitates quick positive adjustments to your rifle cant as you can see in the video. My DLOC-S modified Harris served me well in my 1000 yard school and has gone hunting a few times.

The improvements to the Harris using the DLOC-S kit are great, but sometimes you might want more. You might need more. Imagine hunting hogs in West Texas from the edge of massive fields. Or perhaps you’re hunting Elk in the Rockies. Either way, you want to scan through your rifle scope, observing multiple potential targets before you commit. You need to pan left, right, left, back again. Typically, you’d rightly expect to fight your bipod as we show in the video. The legs either drag the ground or start to fold. That doesn’t exactly make for smooth effective panning, and that’s aggravating.

ZRODELTA came up with a well engineered and built solution, the DLOC-SS system. Start with the same functionality as the DLOC-S I’ve used for several years and add a panning function. Milled from 6061-T6 aluminum, a tongue extends forward from the base of the DLOC mount. The mount pivots from the rear on that tongue that has an arced slot machined into the forward end.

A bolt equipped with a SARG style knob at its base extends up through the arced slot. It has a stop when loosening to prevent it from coming off. Tighten the bolt and you lock down your bipod’s panning. Loosen a little and you get buttery smooth panning. Think about the difference in feel between closing the door on a base model economy car and closing the door on a Mercedes-Benz. You know one of those screams quality, durability, precision. It’s the same feeling when I pan with the DLOC-SS.

If you already own a Harris S style bipod, you can purchase a DLOC-SS upgrade kit from ZRODELTA for $189. I’ve been to both the original manufacturing facility and the huge ZRODELTA plant. It’s no accident that these components are top shelf. If you’re looking for a new bipod, ZRODELTA has put together the DLOC-SS with an Aimtech Warhammer bipod. The bipod is a Harris style bipod and instead of the SARG knob to lock or release the cant function, you use a rotary lever as I show you in the video. It’s adjustable so you reposition the locked lever to 12 o’clock, 2 o’clock, whatever. You can buy the DLOC-SS with the Aimtech Warhammer bipod from ZRODELTA for $269, $80 more than the DLOC-SS kit alone.

Back to the original question – To stay with a VHS era bipod that does what it does reliably, or to jump to an upgrade with tangible benefits to hunters, shooters and hybrids like me (and probably you). Upgrading isn’t the cheapest thing you’ll ever do, but in the grand scheme of what you likely have invested in your rifle and optic, it’s really not bad. And as you’d expect, the higher price reflects the higher quality.

If all you’ll ever do is shoot paper off a bench, an old school Harris is probably just what you need. But when you leave the bench for uneven terrain or multiple target engagements, like me, you’ll be quite happy with yourself for having upgraded. Tell us what you think in the comments below.