IWI Zion-15 Review – Our Rifle of the Year Award Winner 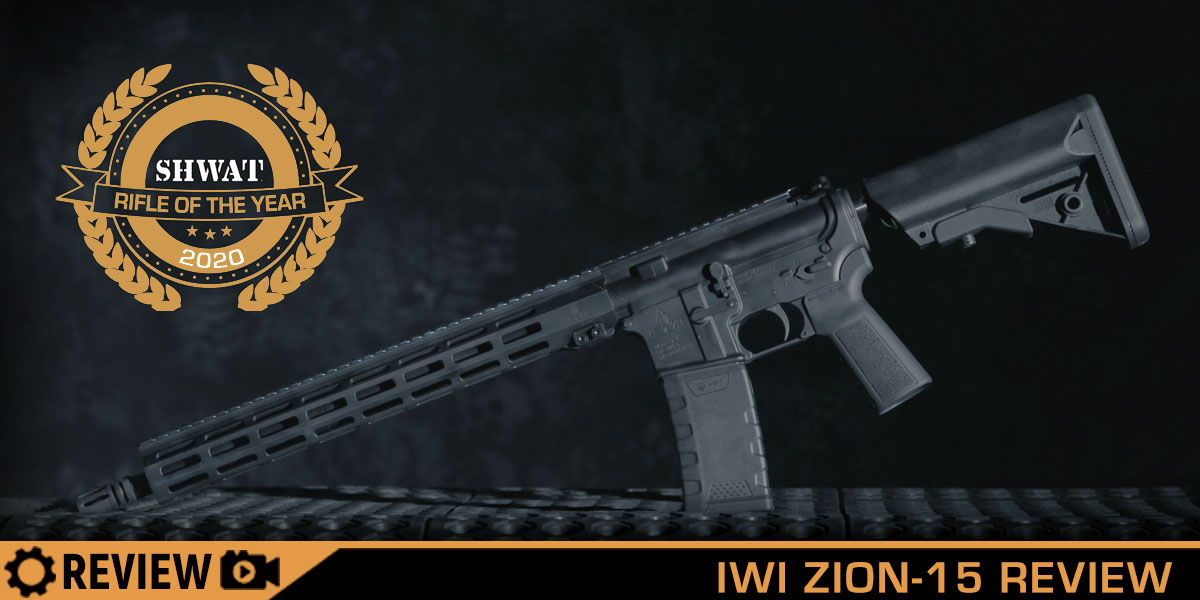 “What AR-15 should I get in 2020?” is a question sent my way more this year than any other that I can recall. “What’s the best AR?” “What’s the best AR-15 for the money?” Based on my personal experience, there’s one easy answer to all of these questions. You’ll want to watch our video review with a 1st and 10th Special Forces veteran to fully understand why the IWI Zion-15 is our 2020 Rifle of the Year winner.

In my mind, IWI is the Israeli owned powerhouse behind a couple of my all-time favorite guns, the Tavor and X95 bullpups. We’ve covered those since the first Tavors became available here in the USA. I’ve seen X95s deployed by plainclothes operators at the Israel – Jordan border. I just love those guns, but I digress… Beyond that, they have the Uzi line, the Galil line, each unique in its space. But an AR, with nothing super Gucci, entering the space this year? It just seemed like a square peg in a round hole.

Since I’d never seen IWI produce sub-par products, I figured I’d give this Zion-15 AR a chance. I admit, they had me at the name.

The Zion-15 doesn’t derive its name from a National Park in Utah, as epic as that place is. Nor does the name “Zion” reference the city from the Matrix films. In my mind, it references the Nation of Israel and/or Mt. Zion in Jerusalem, Israel’s storied Capital. I guess I should have asked IWI, but I didn’t really coordinate very closely with them for this Zion-15 review. But knowing a little history and having been there, yes, the Zion name got me. It rings of destiny and preeminence. That’s a tall order for another M4 based AR-15 rifle. I’ll breeze over the Zion-15 specifications as they are generally well covered elsewhere and don’t really tell the story of why we picked the Z15 as our 2020 Rifle of the Year. A sixteen-inch 4150 chrome moly vanadium barrel with a  1:8 RH twist hides beneath a fifteen-inch free-floating MLOK handguard. Sporting a 5.56 NATO chamber, the rifle weighs in at six and half pounds and ships with a PMAG, despite the fact that we used the Hexmag from our photography tool bench for photos. The square bottom of the Hexmag balances better. With the B5 Systems stock collapsed, the Zion-15 measures thirty-three inches long. The B5 pistol grip, which I favor over the older A2 grips, won’t grab everyone the same way (watch the video below for more of that conversation), but it does differentiate the Z15 from countless other ARs. The midlength gas system was once a new and exciting feature on ARs, but is pretty common now.

The Rifle of the Year

With specs like that, what makes the Zion-15 so compelling that we give it our Rifle of the Year Award? I’m glad you ask. In reality, it’s the combination of quality and value. Those are super generic statements, so allow me to dive deeper.

When I received the Zion-15 I didn’t do what you should. I didn’t lube it at all. It’s not a fancy gun, it’s a gun meant to shoot. So I mounted an optic and took it shooting, dry. Not one hiccup. The rifle was surprisingly smooth like that. The usual non-Gucci rifle grit feeling in the BCG and/or charging handle simply wasn’t there. That speaks well of the machining, finishing, and coating processes. Combined, those specifics whisper of the quality I hope from IWI.

The Zion-15 trigger feels a whole lot like mil-spec triggers from other manufacturers, but better.  Again, straight of the box there is no grit, no stutter, just a smooth pull, and a clean break. The reset is more than obvious, you’ll hear it in the video. We’re not talking about a drop in aftermarket two-stage Timney trigger here, but we are talking about one of the best mil-spec style triggers I’ve pulled. B5 Systems tout their Enhanced SOPMOD Stock as better the countless others due to the ability to get a better cheek weld than you can with a lot of the usual suspects. lt has both fixed and QD sling mounts. If you go back to the earliest SHWAT™ stories from years ago, you’ll find that I favored SOPMOD stock back then and still appreciate them today. I’ve used the dual storage compartments to keep up with batteries, I’ve stored NFA papers in them, etc.

The B5 Systems pistol grip has a relatively aggressive “no-slip” texture on the side, but not so aggressive to be a problem for anyone out there to be bothered by it. As stated earlier, I like the steeper angle, not to mention to the good girth adding to a solid grip.

Do you remember the giant cheese grater handguards common a decade ago? Quad rails at 3, 6, 9 and 12 o’clock could be rough and relatively heavy, not to mention bulky. Fortunately, today we have countless choices in great aftermarket handguards. However, I don’t intend to ever change out the Zion-15’s handguard. Yes, it’s MLOK like many others today. Yes, it’s fifteen inches and like many handguards and it’s my preference for a sixteen-inch barreled AR. No, it’s not plastic, and no, you don’t pay extra for the upgrade. Mounted the Zion-15’s upper receiver, it seems to be as rigid as a monolithic design. Note that I said “seems’ because I don’t have the machinery to actually test that theory, and I get that physics might tell another story. But that’s not the point, right? Sum of the Parts

Since we’re already hitting on antiquities in the Zion-15 review, I think we can quote the ancient philosopher Aristotle here. He’s credited with the phrase, “The whole is greater than the sum of its parts.” IWI either makes or sources some quality parts for this AR-15 build. All together, they add up to a really nice, yet still basic, AR. Handling the gun, I can’t help but think there’s more to it than meets the eye. That’s a little vague, let’s try an analogy.

If you’re like most people, you like chocolate chip cookies, right? You find them everywhere, from your favorite dentist’s office to hotels, to the convenience store. You generally know what to expect when you bite into one. But every once in awhile, you get one that’s just better than the rest. You pause, smile, and say to yourself, “Wow, that’s really good!” It didn’t change your life, it’s not the utter pinnacle of $3 a bite Geredeli chocolate chip cookies at Downtown Disney in Orlando, but you can tell it’s measurably better than most similar cookies. The Zion-15 strikes me that way.

When I first got the Zion-15 in, I went to the mountains and verified minute of rock accuracy at 200 yards at a good friend’s property. We shot numerous mags from a variety of makers and a random collection of ammo. That was just the beginning of the smiles to come. A number of us shot it, include wife and kids. There was nothing scientific, but the value of a smile is pretty high in my book.

For real accuracy testing, I later headed to Magnum Shooting Center to meet up with Josh Bendell, a veteran of the 1st and 10th Special Forces. Bendell isn’t usually a fan of dry guns, you can find his take on cleaning and maintaining an AR here. I thought you might appreciate his take on the gun’s accuracy vs. mine. I mean, the man has more time on the platform than I ever expect to accumulate.

While I feel conflicted about not sharing all our results with you here in the text, I really do want you to watch the video. Suffice it to say, the Zion-15 is in fact a shooter. One of us put two rounds in the same hole, but you’ll have to watch the video below for the rest. Sorry, not sorry, right? Final Thoughts on the Zion-15

The build and accuracy are impressive on this rifle. Those things might be enough to give the Zion-15 the SHWAT™ Rifle of the Year Award. But this 100% made in the USA rifle has three more attention getters that I found. First, it ships with an MLOK QD swivel mount so you can run a sling without having to buy anything extra. Why isn’t that an industry standard?

Second, it ships with a Gen 3 PMAG. So do a lot of others, but it’s worth a mention anyway.

Third, Zion-15 has an MSRP of only $899. For this tasty cookie, that’s a great deal. I don’t need to cover all the preceding again to make my point. If you got this far, you know. But there’s more, and you’ll find it in our video review below. Enjoy!