To Tavor or not to Tavor – Do you really have to ask?

Okay. So there has been a lot of buzz on the web and in magazines about the new IWI Tavor (IWI is Israeli Weapon Industries). The million dollar question is – Is it worth buying? My answer: After chewing through more than 1200 rounds in a full on carbine class and some tactical hunting, yes! And there is good reason for my enthusiasm. If you are looking for a review to just confirm what you have already read about the Tavor, you are reading the wrong article. This is a report of how the Tavor did in the real world.

My brother and fellow SHWAT™ founder, Jonathan has been drooling over this gun day in and day out for months. I have too, but I have to admit I had some reservations about it. I have owned and shot some very slick ARs. I’ve been to SHOT Show to see and handle some of the latest innovations in the AR world and I love the AR platform. And why not? It’s been around for half a century and has been refined into a smooth, accurate and reliable weapon and range toy. On top of that, it’s like having the coolest Legos ever made. If you don’t like the way it is, change it.

Still, there are limitations to the AR platform. Perhaps most notably is the over all length of the AR-15. While it can be made quite short, there is a mountain of red tape to overcome with the ATF, and you end up losing noticeable velocity with a short-barreled AR in the .223/5.56 caliber. In numerous circles a demand for a piston carbine is real, and the AR-15 was designed as a gas operated system. There have been many attempts at overcoming these challenges. Some have produced some innovative and interesting guns. Each attempt resolves some issues, but leaves or creates others. None achieves a noticeably shorter overall length with the stock unfolded.

Enter the bullpup. It solves the overall length challenge while keeping the barrel to sixteen inches and most are piston driven. But historically, they all have introduced a host of other challenges: Triggers that are less than desirable, some have trouble accepting common magazines, some lack of accuracy, others have reliability questions and so on.

Now look at the IWI Tavor. It’s short even with a 16 inch barrel. It’s piston driven. It reliably runs almost any AR magazine. It’s easy to use left or right handed and can even be converted to eject on the left side. It has a non-reciprocating charging handle, and the version the Israeli Defense Force (IDF) has been using is quite reliable.

Sounds good on paper. What happens when the American version of the Tavor hits the real world? We now know and you are about to find out.

We reached out to Fred Mastison of Force Options Training and Security to help us find out what would happen when the Tavor was put under the microscope in a carbine class and tactical hog hunt. We’re talking a private class with no distractions. If something different or unexpected comes up, we can stop the class and evaluate the situation.

Jonathan and I are regular guys that get to do some really cool stuff. We’re not Special Forces, or professional shooters. But we do expect excellence in our gear and ourselves. Fred is a true professional. A US Army veteran with years of practice and advanced training under his belt, he is both a great shooter and an effective communicator.

So what happened when Fred, Jonathan, and I met up with two Tavors and lots of Silver State Armory ammo at the Spike Box Ranch in west Texas?

We learned a lot. One of Fred’s first impressions might stir some controversy. He said “There’s nothing wrong with the trigger. In fact, it’s pretty good.” I’ve had my hands on a Tavor for some weeks. I played with it when it was introduced at SHOT Show. I played with it again at the NRA Show. I’ve read many forum discussions and seen a plethora of YouTube reviews. “Pretty good” is not what you generally hear about the Tavor trigger. Mostly people talk about how bad it is and how to mod it to make it better. 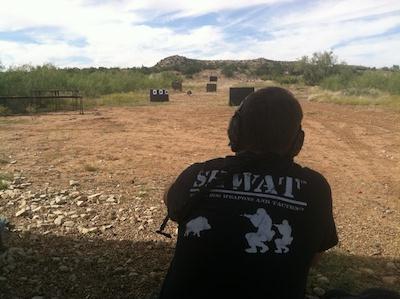 In less than an hour, Fred had us shooting 638 yards and getting consistent hits. Our Tavors were and still are bone stock. Over the years, I’ve learned to be very careful about who I listen to and let influence me. Just because a lot of people listen to someone on the internet doesn’t mean I’m going to agree with them. This is an excellent example. I’m not God’s gift to marksmanship. I’m not bad, but I’m not amazing either. Fred is right. The trigger is pretty good! And here’s a tip you don’t see many other places: not surprisingly, the more you shoot the gun, the better the trigger gets.

Some have said the ergos are odd. That’s a matter of opinion. As Fred first observed – it’s a lot like holding a pistol. With both hands close together, compared to an AR, AK, or any other traditional style rifle, it is definitely different. It does make the balance just right though. You can even shoot it one handed like a pistol if you want.

The manual of arms (the operation of the gun and drills to mitigate malfunctions) is in principle very similar to that of an AR-15. Malfunction drills work just like an AR. Yes, some controls are in different places, but the steps that have to be done when it goes click instead of bang are identical. The only thing that I had a hard time getting used to was locking the bolt open. Jonathan, on the other hand had no trouble with this. In the end, it’s no easier or harder than an AR. Just different.

When it comes to shooting around barricades, it’s fantastic. The shorter overall length gives extra room to maneuver. Happily, the charging handle is non-reciprocating and doesn’t get in the way. I found its location to be quite intuitive.

In contrast to a standard length AR-15, the Tavor’s bullpup design allows you to kneel lower with the Tavor in a muzzle down position without putting the muzzle in the dirt. The only challenge I had when working the barricades was while shooting left-handed. I tended to hold the rifle a bit too close and a handful of cases hit me in the chin. So close in fact that once a case bounced off my chin and back into the receiver before the bolt closed causing a stovepipe. Having practiced the drill, it hardly slowed me down. This challenge seems to be unique to me. Jonathan never had this issue. 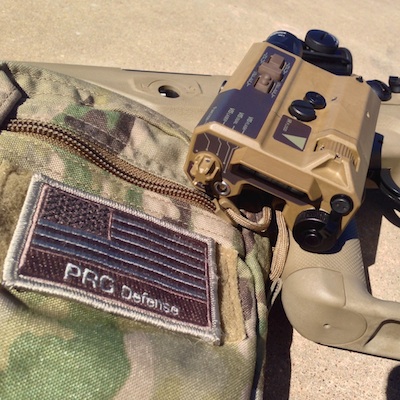 When it comes to overall length, shorter is definitely better operating in and around vehicles. Our hunting transportation was a four-door pickup. Entry and egress from the truck was easy, along with safe weapon management inside. The Tavor is flat out superior to an AR or AK in this regard and has none of the challenges associated with having an SBR (Short Barreled Rifle).

After practicing everything Fred threw at us, it was time to put ourselves to the test. First, a bit of competition. Some timed drills, with missed shots considered a disqualification. Here, I have to admit Jonathan beat me out. We started off about even on time with me having the edge on accuracy. In the end Jonathan got his accuracy worked out and was able to get bullets on target faster than I did. We’ll see what happens next time we try that…

Next was the hunt. Hunting both day and night, the Tavor performed admirably. The short length of the carbine make moving through dense brush and Mesquite trees easy. Accuracy already established there was never a question of whether or not the Tavor would make hits on hogs as long as we did our part.

I think a fair fight is great for boxing or MMA. When it comes to the fight against invasive, destructive feral hogs, I’m not looking for fair. I want a clear advantage. Unfortunately, wild hogs have several distinct advantages over humans. Their sense of smell is good. That can be overcome by working the wind. They don’t come out as much during the day. But if you can see, you can get very close to wild hogs under the cover of darkness. This is potentially dangerous, so the training pays off here.

This trip we had on hand some great tools to see in the dark from ATN. A couple of MVN14 night vision monoculars. We also had ATN’s Thor thermal weapon sight. I have to tell you, I love using thermal. The high contrast allows my eyes to pick up on virtually any sizable living thing at long range. How far is that? I don’t know. I spotted deer and pigs at more than 1,000 yards, well beyond the distance Jonathan and Fred could locate them using Gen 3 night vision. Once I spotted pigs, I guided our group to within firing range. Jonathan and Fred were taking advantage of the night to compare weapon mounted infrared lasers. Aided by a LDI SPIR IR illuminator, they targeted hogs with an LDI DBAL I2 IR and the brand new Raptar Lite by Wilcox (Distributed exclusively by Potomac River Group – PRG Defense). Subscribe to our newsletter for more on those. In the end, it was 64 grain PPT Bonded bullets from Silver State Armory that put the hurt on the pigs that night. It was one to remember!

When it comes to reliability, the Tavor was flawless throughout the event – not one hiccup. Prior to arriving at Spike Box Ranch, we applied our favorite cleaner-lube-protector, Rand CLP, and purposely didn’t clean or lube after that. I’m not saying you should do the same, but we saw no signs of degraded performance on either Tavor at any time.

Fred Mastison of Force Options is a fantastic instructor. Spike Box Ranch has a great range and the best hog hunting I’ve ever done, not to mention some really good food when the ammo runs out. We will definitely be back to the ranch and we can’t wait to train with Fred again!

So, would I recommend buying the Tavor? Oh yeah! If I had to choose between an AR and the Tavor, which would I choose? First, I’m really glad I don’t have to make that choice. I cut my shooting teeth on the AR and I’m quite fond of it. Before the class with Fred Mastison, I would, without hesitation, have chosen the AR. Now, I’m not so sure. It has some very real advantages and few real drawbacks.

My suggestion is to try one yourself and form your own opinion. But know this: it runs and runs well. You can be gentle and reach out to the limits of the .223 caliber or you can run it hard and fast. With the polymer stock, it doesn’t even get hot in your hand. But it’s one of the hottest guns on the market and probably the most exciting new to America gun this year! It just might be our gun of the year.