Where do I even start with the Hekate silencer review? It’s taken longer to get done that I expected, in part because CGS silencers are unlike pretty much everything else out there. The discovery phase required learning some brand new things – well, new to me and a decent chance new to you, too. I mean, who else has a white paper published on suppressor tech? I’d suggest taking this written review together with the video for a more comprehensive (still “First Look”) at CGS and the Hekate silencer.

CGS was just a name echoing in the crowd of silencer manufactures to me. When Silencer Shop said CGS looked like a good fit for the way we use and review cans, I said, “Sure, introduce me.” Then I got busy researching CGS in anticipation of the first phone call.

I’d love to tell you this is an exhaustive look at CGS and their Hekate silencer, that I left no stone unturned… That just wouldn’t be true. CGS is so different I feel like I’d need to produce at least a mini-documentary film to really cover them and what they do. Hopefully, this is only the first CGS review I’ll have the opportunity to do and can add more to future stories.

If we let CGS introduce themselves here they might say, “We have a plan. Move fast, come out of nowhere, and act with authority.” They say it on their website, actually. Their team is a tough fabric woven from stories of Special Operations Fabrics. Their “People” page reads like a script for an action movie trailer. 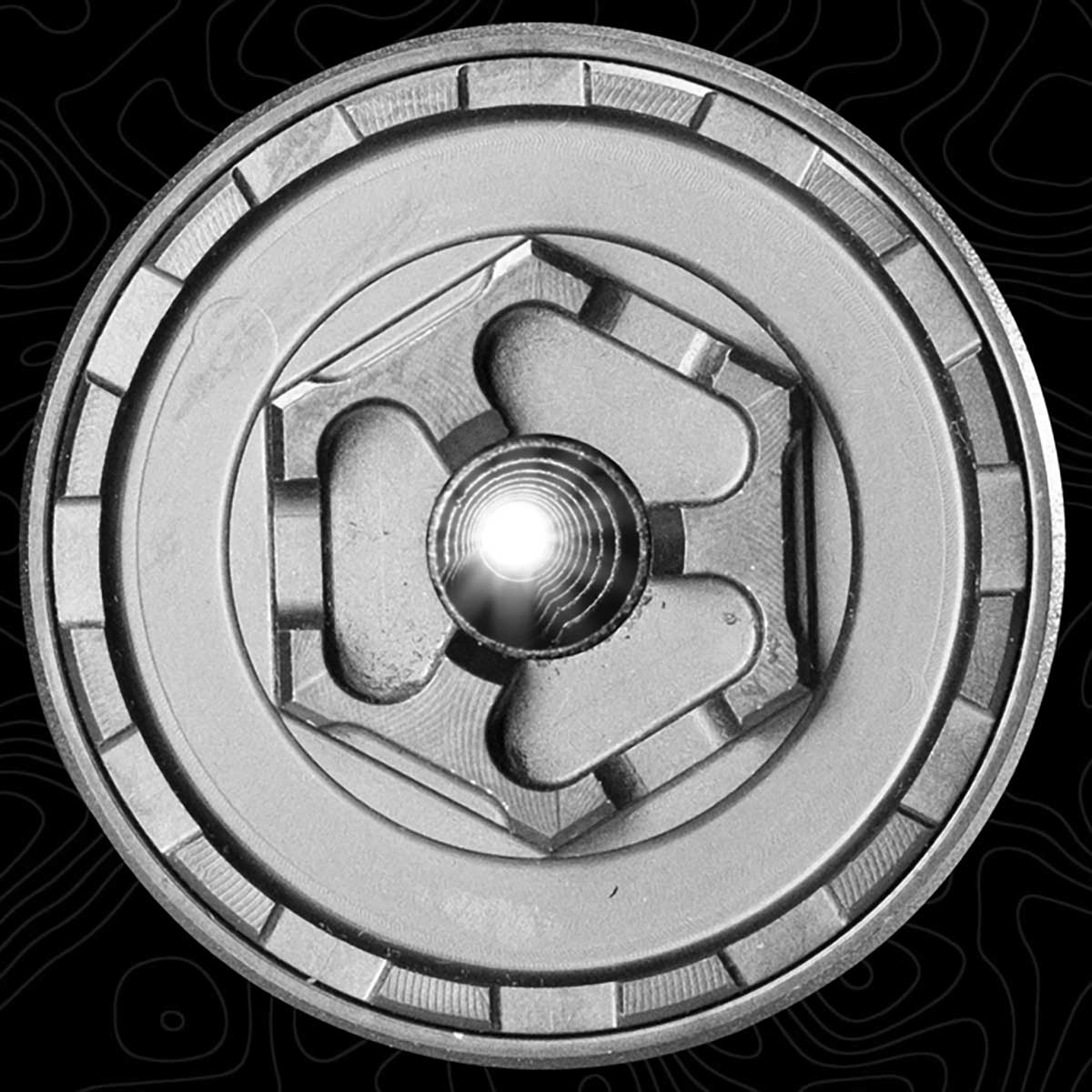 To appreciate, much less understand, the Hekate and other CGS silencers, you have to look at how they make them. Traditional manufacturing of silencers and most other things made of metal can be called “Subtractive.” You start with a bar or block of your chosen raw material and begin reducing its mass to fit your vision.

In the case of a silencer, typically you’d start with a bar, then remove (aka, “subtract”) material from the bar. You machine it down until it becomes a baffle, the outer tube, a mount, whatever. Much of the material removed would be recycled, but you can imagine the inefficiencies and cost of wearing out machine tools in the process.

CGS makes silencers using an “Additive” process more commonly referred to as 3D printing. Technically, it’s Direct Metal Laser Sintered (DMLS) heat treated 6AL4V (Grade 5) titanium. Essentially, you end up with a one piece silencer with fewer possible points of failure than a typical can. We all know titanium is strong and light, and typically expensive. And while 3D printing certainly reduces the waste/recycle component of traditional manufacturing dramatically, it’s far newer technology and therefore isn’t any cheaper when you go to buy it. Maybe that will change in time.

One more big deal kind of note here, at least to me. CGS used a Hexagonal Boron Nitride coating on the inside of the can. They claim no need to ever clean the can. Ever. I love the sound of that, pun intended.

The Hekate itself is a .338 caliber silencer. I’m not suppressor scientist, but .338 strikes me as a big round to quiet. It should take whatever you want to throw at it, including 338 Norma Magnum, 338 Lapua Magnum, and others. My testing used a Ruger Precision Rifle in 338 Lapua Magnum with Barnes Bullets ammo.

Technically, it’s the “Hekate DT” noting the Direct Thread mount. The can itself is about the size I’d expect for the caliber, 10.5 inches long and 1.75 inches in diameter. But, and this is a big “but”, it strikes me a crazy lightweight at 179 ounces.

Ultimately, the purpose of a silencer is to quiet the report of a gun. And in the case of the Hekate, a big gun. And I’ll take a silencer over a break on the big guns every time. Note our story on Traumatic Brain Injury for more on that, Beyond that, I’m straight up paranoid about hearing damage. My ears ring as I type this.

So color me amazed that I could comfortably shoot .338 Laupua through this can with no muffs or plugs at all! Silencer Shop tests showed an average of 137db shots with the Hekate, compared to 164 without (without a brake). I’ll save you doing the math, that a 27db reduction. And if flash suppression is a secondary priority for you, the Hekate magic is pretty impressive there, too. 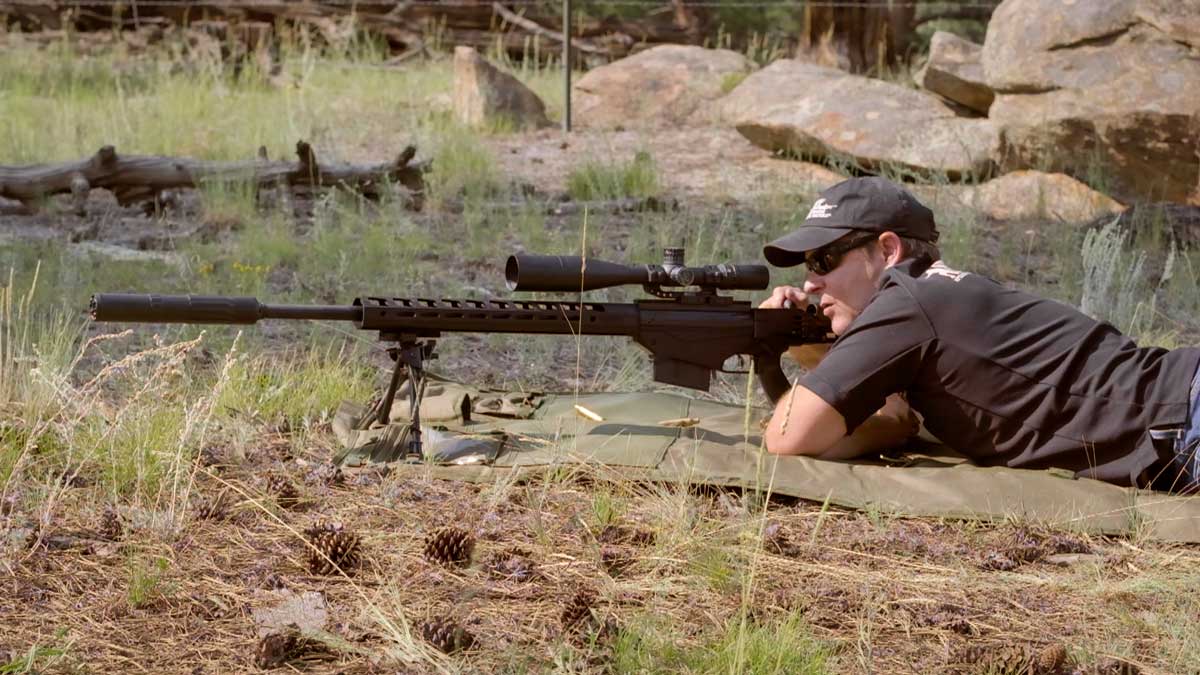 Where did the CGS Hekate get it’s name?

The Hekate silencer gets its name from little known Greek goddess known for magic among other things. For more on the Hekate backstory and connections to this silencer, watch the video below. Oh, and I’ll cover how you pronounce that name as well!

I think every gun ought to be suppressed. Suppressing the big bore guns is a harder game for manufacturers to play. It can be done. I have a 50 BMG can from another maker that is pretty good, albeit crazy heavy. I likely wouldn’t shoot my 50 without it. If you have .338 and the Hekate, you might not ever shoot that .338 again without the Hekate. So, yeah, that’s a no hesitation recommendation. Huge thanks to CGS for sending the can over to SHWAT™, and another huge thanks to Silencer Shop for introducing me to CGS! If you’re going to get a Hekate, you might as well get it through them.