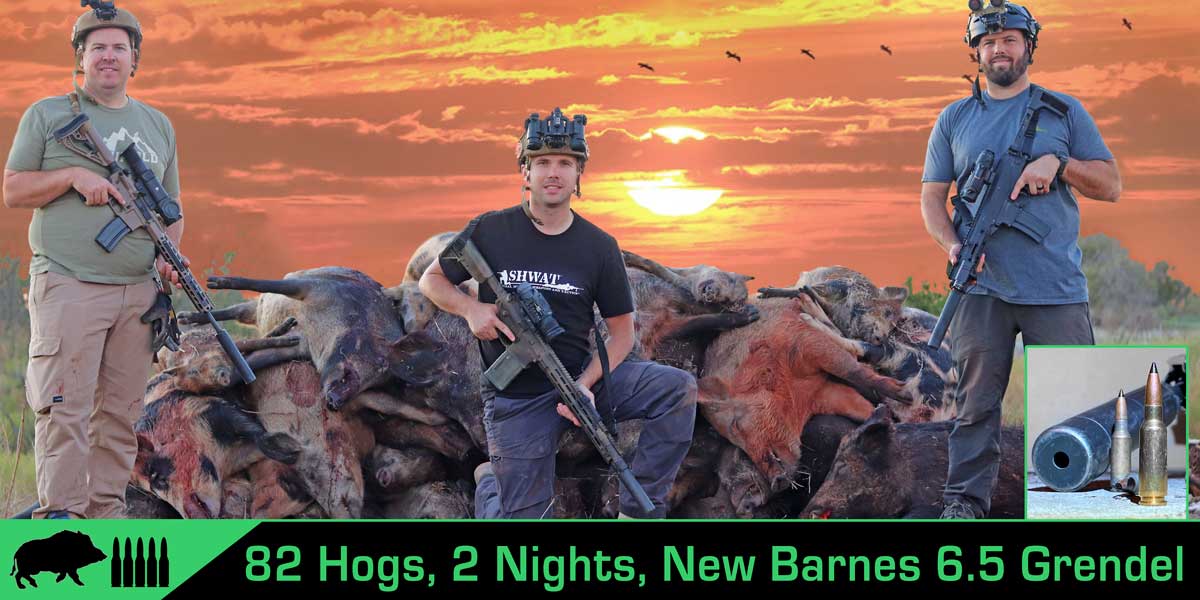 It’s no secret, one of my favorite hog hunting calibers is the 6.5 Grendel. Others use it for deer, sheep, and many more targets, but this day I find myself back at the farm along with fellow SHWAT™ Pro Staffer, Casey Jones, and Remington PR Manager, Eric Suarez.  This hunt is a little different because I am easily the worst shooter here (Eric is a retired Marine). That’s actually a good thing, and Eric is our first industry guest at the “SHWAT Proving Grounds.”  He already knows how much I love slaying feral swine with 6.5 Grendel so he shows up with the brand new Barnes Bullets VOR-TX Grendel loaded ammo for live media testing (aka, shooting wild hogs).

For this hunt, I am running my Alexander Arms 6.5 Grendel rifle, an AAC SDN-6 suppressor, and my Pulsar Trail XP50 LRF.  While this is my tried and true hunting setup, I recently added a Surefire M600DF light and an M-LOK offset mount from Arisaka.  I may or may not tell you the story some other time about how my close encounter in a pasture told me it was time to add a light to my weapon. After arriving at the farm, we grab a quick bite to eat with the in-laws.  After gearing up and stepping out on the back porch, I scan the field behind the house and spot a sounder of about 40-50 pigs on the west side of our property.  The moon is almost full as we approach the pigs. They sense our presence but don’t spook.

By the time I range them and they are more than 150 yards away. It is so bright we can see them with our naked eye.  The pigs know something is up and start their escape just I send the first Barnes 6.5 Grendel round their direction. When the chaos ends, our three-man team put six hogs down in that field! It’s a great start to the weekend.

Not long afterward, we spot another sounder.  This group is about 75 yards away when we stop the truck and set up our shooting positions.  The lead sow takes a slight pause to look around which means we only have a second or two before they run away.  The shooting commences.

One of the pigs drops right away while the others scatter.  At this point, I am thankful for the 1.6 magnification on my Pulsar Trail. Why? Because the lower magnification let me see a hog running straight at us! An optic with a higher magnification probably would not have had the hog in its field of view.  The rushing pig finally falls 5 yards from our feet after Eric and I dump 9-10 rounds in him.  Casey offers some colorful language and then spots one more hog to our left, which we all shoot.

We engage other sounders and solo boars through the night.  Some of the shooting is great, some could be better, but we recover 45 bodies. With three shooters, I can’t say exactly how many succumb to the Barnes TTSX bullets, but it was a lot!  It’s our best night ever and we decide to call it done because a long day awaits us.

After getting a couple of hours of sleep, we get up, eat breakfast and reminisce about our total domination.  We don’t bask in our glory for very long because we have some cleaning up to do.  The wheat is about to be sown which means we need to get the dead hogs out of the fields. Eric ponding the size of this pig. It took all three of us to lift it.

Using the Kioti (a UTV) and a truck with a trailer, we start the process of picking up the hogs.  It takes us several hours with lots of lifting and straining, but we finally have the 45 hogs at the trash pit and spend the next 30-45 minutes building our very own wall of pigs. Why spend all that energy stacking bodies? You know, we have to satisfy the “Pics or it didn’t happen” crowd. That, and it was truly awesome!

More Reasons to love the 6.5 Grendel

As we eat dinner, we discuss our plans for the night.  Both Casey and Eric have flights to catch the following day and we need to set aside time for picking up the pigs.  We conclude that we will have a hard stop at 2 a.m., giving us 6-7 hours to hunt and some time to move the hogs off of the fields.

You would think the hogs would realize what happened the night before and avoid us, but this is not the case.  They are EVERYWHERE. 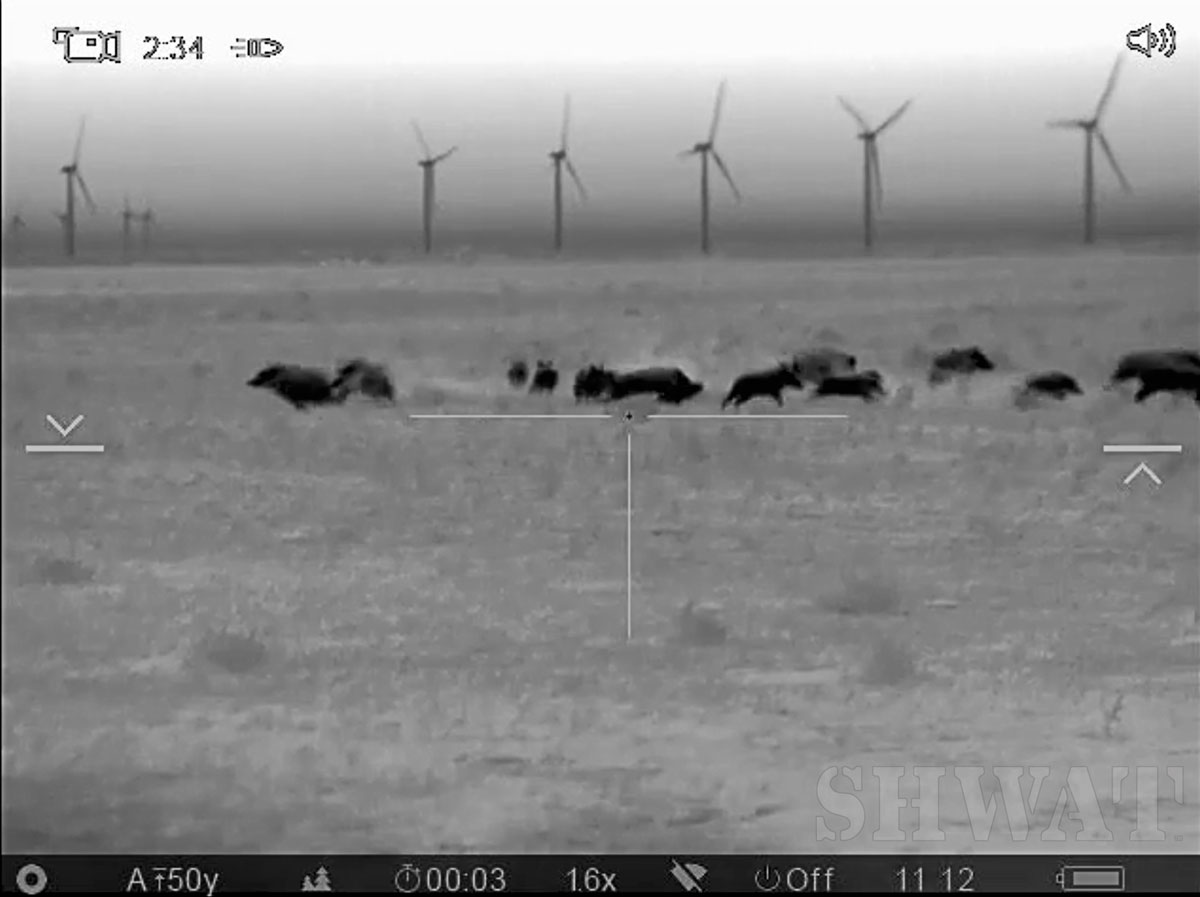 This screen grab from my Pulsar doesn’t do it justice! The action, the shooting, it’s amazing!

We arrive at the CRP field and see about 15-20 pigs within 75 yards of us.  It’s kind of nice because while the moon is still bright, the vegetation provides us a little cover.  With Eric to my left and Casey to my right, I start the 5-second countdown.  5, 4, 3, bang!  I blew it.

That Geissele SD-E trigger is pretty sensitive, and, yes, I did drop that hog.

The rest of the hogs run away and I apologize while laughing to my hunting buddies about the error.  Still, we get to chalk up another hog down to the Barnes VOR-TX Grendel round.

We move from field to field and find another decent-sized sounder in the “Hay grazer” field.  Fortunately, the wind is in our favor and we do not have to walk very far to shoot into this group.  Not wanting to shoot prematurely while counting down, I ask Casey to run the countdown.

My Grendel’s first shot deposits the 115 grain VOR-TX Barnes TTSX round into a sow, dropping it in the middle of the sounder. I quickly turn my attention to some of the pigs running back to my left and drop another one.  Seven down in this field so far, but we will be back in this field before we’re done. Did I mention I like 6.5 Grendel?

Our 2 a.m. deadline approaches quickly.  We cruise west of town and find two boars rooting around.  We position ourselves 65 yards from them. In retrospect, the scene reminds me a little of the movie Captain Phillips. In something close to simultaneous precision, three shots at the ring out and the hogs look like a pair of synchronized swimmers going down.  It is beautiful but it’s now time to start cleaning up. And there they were! But not for long…!

We head back to the house to get the Kioti but two hogs decided to be our greeting party. We dispatch before heading back to the “hay grazer” field.

As we approach the field, I scan the field looking for the seven dead hogs from earlier. I spot yet another sounder wrecking this field!  It’s late and we are working on some self-imposed time constraints, but “irresponsible” would describe leaving hogs doing their worst there

We decide to drive as close as we can in the Kioti without spooking these pigs.  Well, I get a little too close and they aren’t waiting around..  As we began heading south, Casey yells out, “Let’s get em!”  I punch the gas and the crazy begins.  We close the gap and both Eric and Casey start shooting.  Hogs drop all over this field.

We spend the next hour or two, pulling the pigs off the fields before retiring for the evening. It’s a ton of work. Well, how did we do on this hunt?  According to the bodies we moved, we have 77 hogs for the two nights and one extremely happy father-in-law farmer. But wait, there’s more! My father-in-law told me later that he picked up 5 pigs bodies that we somehow overlooked in the hay grazer field, bringing our total to 82 in two nights!

Hogs died. Lots of them. If you’re looking for weight retention and expansion, I apologize. We were too busy killing and stacking the bodies that I failed to look for the spent projectiles. I was the only one running the 6.5 Grendel, and with two other shooters and pigs dropping everywhere I’m calling it a great success, and since then I’ve taken a few more.

Eighteen hogs and 1 coyote proved good test media for the Barnes Grendel ammo. My farthest shot, 292 yards on a solo boar, just dropped him. So more than ever, I remain a huge 6.5 Grendel fan and it’s nice to have another ammo option that works consistently. It even works if you can’t do a countdown from 5 to 0.