I wasn’t the first to jump on the 300 Blackout bandwagon. And bear hunting was just something on my list to do when I met Brett Throckmorton. I asked him about his experience using 300 Blackout on hogs. “We should set up something to test out your new loads on hogs,” said I. Brett’s response went something like this: “Hogs would be good. Lot’s of people are doing that. But how about we go bear hunting with 300 Blackout in the mountains of Idaho?” Brett is the Public Relations man at Barnes Bullets and the almost mischievous look in his eyes when he put it that way made my next question easy. “When?”

300 Blackout wasn’t created for bear hunting. It was created for man hunting. Hunters have been split between enthusiastic and skeptical about it when it comes to big game like bear. After our successful Idaho bear hunt with Table Mountain Outfitters I wanted to know more about the 300 Blackout for bear hunting and set up an interview with Brett accordingly.

While he once worked in the Barnes Bullets lab and now gets paid for pushing the brand, he’s the real deal, a super seasoned hunter who loves the AR-15 platform as much as anyone I’ve met. Growing up in Utah in a family of outdoorsmen and hunters, he can’t remember his first hunt any more than he can remember his first summer. When elementary aged, school would let out early the Friday deer seasoned opened. It was off the bus and on to deer camp with his BB gun in tow. He learned the ways of wilderness hunting and when old enough, hunted upland game. At fourteen years old he started deer hunting with his grandfather’s old 30-30. At sixteen he got his first big game score. With his dad was by his side Brett downed a bull across a canyon atop a big ridge.

With three bear hunts under his belt and a head full of professional ballistic knowledge, Brett is a great resource when it comes to talking 300 Blackout for bear hunting. With so many caliber choices available to someone in his shoes, I wondered how he settled on 300 Blackout. I knew we wouldn’t attempt bear hunting with subsonics. Here’s his thinking:

“I’m a fan of AR platforms – They are easy to operate, they are tough, and they are just plain fun to shoot. I needed something that delivered more energy on target at typical bear hunting than a 5.56 or .223 but without the added weight of jumping up to an AR-10. So I was set on the AR-15 receiver and began looking at options like the 6.8 SPC and 6.5 Grendel. The fact that the 300 Blackout load wouldn’t require swapping out the bolt carrier group is what got my attention. Saving money on the build cost made a difference. It’s true that you can get a little more foot pounds of energy from the 6.8 SPC and Grendel but I also like the idea of having a slightly wider frontal diameter offered from the Blackout. Given those factors I started playing with the Blackout.” 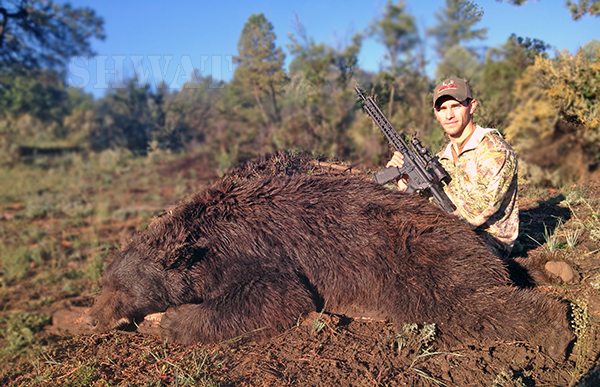 These factors led to the adoption of the Barnes Bullet’s 120 grain VOR-TX ammo for Brett’s bear hunting. It’s what he brought to our Idaho hunt. Keep in mind this is a supersonic load, not hushed subsonic, flying 2100 feet per second and delivering 1175 foot pounds of energy. VOR-TX is a high penetration high expansion product. In 10% calibrated gel blocks this round delivers twenty inches of penetration. The bullet will retain most of its weight while virtually doubling its diameter as it expands through the target animal.

Between the ease of building a 300 Blackout rifle and the ballistic data you’d expect solid results. So far, so good, especially if you don’t like tracking wounded bears through the woods! Brett’s trigger time on the Bear Interdiction Task Force (BITF) started in New Mexico. An elusive black bear had evaded his hunters for a couple of days. They had tracked him, but he kept giving the dogs the slip. A strategy to get ahead of the bear was formed and executed as Brett hit it with a single shot at 100 yards. The black bear stumbled forward a short bit and was done.

The Barnes 120 grain VOR-TX again did its job on our Idaho bear hunt. We’d chased a bear for hours and were now situated in a canyon with the thickest brush concealing its movements. Given the position of the barking dogs, we knew we’d been within twenty feet of the bear yet could not see him. We split up with me positioned high near a canyon exit and Brett bushwhacking down in the canyon. The bear came up, but only flashed its fur for a tiny fraction of a second. Not knowing where the dogs were, I had no shot. The bear headed back down into the canyon where Brett spotted it. In less than five seconds from sighting the bear Brett had downed it. One shot, roughly eighty yards. As its final act of defiance, the bear rolled down the canyon wall adding a few hundred feet of steep retrieval efforts. Brett has other stories to share of hunters downing bear with Barnes 300 Blackout, but we have to wrap this up somewhere. Ammo makers like Barnes have a ton of resources in their own labs to test and analyze their products. The numbers all say the 300 Blackout 120 grain VOR-TX round ought to be great for bear hunting. But as Brett says, “Hunting doesn’t take place in ideal situations –things don’t go as planned, weather doesn’t cooperate, guns can break – and that is why we think it’s important for us at Barnes to test our products in actual field conditions.” Personally, that gives me a great deal of confidence using Barnes Bullets. I’m grateful to have been part of the field testing and look forward to more success stories using their ammunition. We’d like to hear your experiences on our forum, so head over and tell us about your bear hunting stories and 300 Blackout successes.