What Would You Do for a Shot at a $28K Hog Hunt Purse? 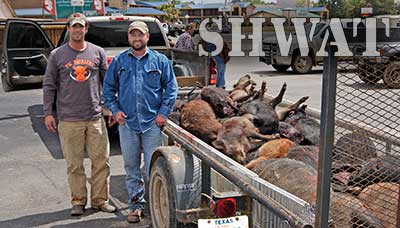 SHWAT™ arrived at the Wild Hog Roundup in Center, Texas, on Saturday, April 6 in the form of long-time Special Hog Weapons and Tactics™ writer Dr. John Woods and me, Brian McCombie, SHWAT™ contributor and NRA Field Editor.  So far, we’ve hunted two solid days, and the score stands at Hogs 2, SHWAT™ 0. In the spirit of understatement, we’re holding out for a come from behind win, like Louisville did over Michigan a couple of nights ago.

Wulf Outdoors Sports, the premier outdoors retailer in East Texas with stores in Center and Athens, sponsors the Wild Hog Roundup.  To really bring out the hunters, Wulf and it’s sponsors have again put together $28,000 in cash prizes to hunters (tactical and old school!), dog hunters, and trappers, all with the goal of knocking back a booming—and destructive—wild hog population.  The Roundup started the evening of April 5 and runs through April 13. According to Virginia Solgot, Wulf’s marketing manager, the big change in 2013 saw the  Roundup split up the event into two categories:  Open/Hunting, and Trapping.  The Open/Hunting category means that gun (and dog) hunters now have their own prize money available. And let’s be honest here – tactical hog hunting is already a ridiculous amount of fun, so adding prize money to pig harvests just adds a layer of urgency to the game.

“Hog hunting’s always been a part of life here, but it’s become even more popular as we’ve seen these hog numbers increase so dramatically,” says Solgot.  “Feral hogs directly compete with livestock, deer and other wildlife for food. The rooting and trampling activity of the hogs causes damage not only to the wildlife habitat, but also to agricultural crops—the damage is in the tens of millions of dollars, every year, here in Texas.”

By end of business on Tuesday, Wulf officials reported that the 29 Roundup teams in this year’s event had registered 223 hogs taken, with the heaviest hog weighing in at 289 pounds.  Now that’s a big hog, but there are bigger ones here, and we’re hoping to take one of them, day hunting, night hunting – whatever it takes!

Dr. Woods and I began our Sunday morning tactical hunt with a quick sighting-in session.  We are hunting on a 1,500 acre deer lease managed by my good friend and our hunting host, David Ellis.  The range is perfectly set for us to get warmed up and zeroed. Woods is shooting a one of his favorites, a Smith & Wesson M&P15 in 300 Whisper, topped with a Leupold VX-R Hog scope and firing Hornady 125 grain V-Max round.  For higher octane requirements, he also brought a Rock River Arms LAR 308.

I am using one of my favorite kits, a Weatherby Hog Reaper bolt action in .308 Winchester with a Zeiss Duralyt 1.2-5 scope. This Hog Reaper set up has served me well, and it looks great, too! Also in my arsenal this trip is a tactical shotgun, a Mossberg Tri-Rail pump 12 gauge outfitted with a Leupold VX-R Hog scope. It, too, is a veteran of my hog hunting excursions.

Both guns are loaded with Winchester Ammunition – Winchester Razorback XT to be exact. It’s the ammo maker’s line designed specifically for hog hunting.  The Weatherby Hog Reaper is loaded with Razorback XT .308, and in the shotgun, Winchester’s newest entry into their hog line, Razorback XT hog slugs.  These 12-gauge rifled slugs break into three large pieces upon impact causing massive wound channels.  I recently used the slugs eight hours from here in West Texas on another hog hunt, and they were devastating.  (More on that to come at SHWAT.com.)

Our morning hunt along some heavily wooded hillsides revealed lots of hog signs, including wallows and rubs on trees, but no hog sightings.  Maybe it was the hog skulls on my rifle stock intimidating them… That night, Woods and I did our first night vision hunt. SHWAT™ founders keep telling me this is the way to go, and with temperatures rising and hogs seeking the cooler moments of the clock, it makes sense. Woods and I are both outfitted with PVS-14 night vision monoculars mounted to helmets, Infrared (IR) illuminators on our rifles, and suppressed AR-15’s chambered in 300 Blackout.  While shooting with this gear is certainly a lot of fun, it didn’t produce a hog, despite six hours of hunting.  But we’re going back out on another night hunt before the Roundup’s over to even the score.

Monday saw us walking trails and logging roads in search of wild porkers, as well as hunting from various stands.  Lots of tracks but, again, no hog cooperation. But we have a couple days left of our stay here in East Texas, and will be hunting hard for all of it.  Updates and photos to come!