VZ58 Backstory and Upgrade – It’s Probably Not What You Think

You know that awkward feeling of being greeted by someone who thinks they know who you are when in fact they are mistaken? That might be the story of the VZ58 here in America. So knowing the VZ58 like I do I wanted to introduce you and show you how to bring this often mis-identified gem up to speed. The VZ58 backstory here is intriguing. I, too, was once oblivious to it. Growing up during the Cold War cemented my love for the military arms of that era. This is particularly true of Communist Block arms that were mysterious and rare-to-unobtainable during my youth. The AK pattern rifles imported in quantity during the late 80s and early 90s provided my first opportunity to start collecting communist block guns. For many years I believed that the ubiquitous Kalashnikov was the only arm used as the standard rifle of the European Soviet elements. It was only later on that I became aware that this was a major oversight.

Although reluctantly under the Soviet hammer and sickle, Czechoslovakia had a long history of producing quality military arms and a strong independent streak in the design of such weapons. This lead to domestic arms designs that differed from those of the other members of the Warsaw Pact. A number of quality weapons were produced, including the CZ75, VZ 61 Skorpion, and the excellent VZ58 rifle. The latter was not available in the United States and relatively unknown to American shooters until the Czechs moved into the Western block and joined NATO.

The VZ58 is often mistaken by Americans as an AK47 variant. Other than its initial rollout as a 7.62×39 caliber gun, it is in no way a similar design. Unlike the AK the VZ58 is striker fired, and the bolt uses a falling block locking mechanism driven by a short stroke piston. Mechanically this design is similar in simplicity to the AK-47, and according to its military users every bit as reliable. My own experience with both Czech produced and American copies of the VZ58 supports this assertion.

I have also found the platform to be more accurate than the AK. It seems the Czech weapons designers focused more on accuracy during military trials, delivering better shot groups than specified by the Soviets when they developed the AK47. The Czech rifle also weighs in around a pound less than the average stamped AK, and is a slimmer, more compact design. While I love both platforms, I find myself taking the VZ out to the range more often due to its better handling and shooting characteristics.

We Americans love to customize everything. Initially that was a problem for VZ58 owners. There were fewer options for customizing the VZ58 compared to the AK, but this has changed with the import of the rifle in greater numbers and the production of American copies.

One such VZ improvement I have been eager to try is the CNC Warrior complete upper and lower handguard system designed by Bonesteel Arms. Upon initial inspection of two piece the rail system several things stood out. The Bonesteel design is not bulky at all. Both the upper and lower handguard sections are nicely machined. Precisely cut angles and clean lines are not only functional but also consistent with the slim characteristics the VZ. The entire system is lightweight and I could tell that installation of it on my rifle would not significantly increase weight. The CNC rail system utilizes the same mounting points as rifle’s military furniture, making installation a straightforward process.

As a huge fan of the VZ58 series, I have several rifles and one pistol to choose from as candidates to wear the rail system. Looking over my options I decided to try it out on the most unusual variant in my collection, a 5.56 caliber VZ.

When Czechoslovakia escaped the bonds of the Warsaw Pact and moved towards joining NATO, their military began development of 5.56 caliber firearms. Several directions of weapons design were explored including adopting a VZ58 in that caliber. While this option offered significant training and supply advantages over moving to a completely new rifle, the Czech military opted for the latter and eventually selected the excellent Bren 805 platform (to be reviewed soon). Happily for us, this did not prevent Czech Small Arms (CSA) from producing 5.56 caliber VZs as a commercial offering, and fortunately Czechpoint USA imports them in both rifle and pistol variants.

I purchased my 5.56 caliber VZ rifle a couple years back and immediately fell in love with it. Not only is it extremely reliable, it is one of the softest recoiling guns I have fired in the caliber. So soft that when I added the same CNC Warrior Slovak pattern brake that does amazing work taming my 7.62×39 VZs, I found it overcompensated the 5.56, pushing the muzzle below line-of-site when firing. I ended up swapping the brake for a CNC produced Modular Phantom flash hider as shown in the pictures. This unit is both effective at reducing flash and looks great on the weapon. The 5.56 caliber rifle uses its own well designed polymer magazines. I have heard some shooters criticize this but such concerns are unwarranted. First, they are available at a very reasonable price. Second, CSA produces and Czechpoint imports the CSA STANAG magazine well adapter. While this does involve a minor parts swap during installation, it will allow the shooter to use standard AR15 magazines. I opted to invest in a solid supply of the factory magazines. These polymer, translucent mags are exceptionally well made and will activate the bolt hold open on the rifle.

While loving the rifle is a good reason to accessorize it, I chose to install the CNC Warrior rail system on the 5.56 VZ to see if there were any compatibility issues with this variant. There were none. As can be seen in my installation pictures, the rail system went on without a hitch.

The process is extremely simple and only requires a minimal amount of elbow grease. Installation begins with removal of the original VZ upper handguard. This is accomplished by pressing out the retention pen until it stops. The handguard simply lifts off. Reverse the process to install the CNC warrior unit. It is tighter than the original, both on my CSA VZ58 and the Century VZ2008 clone. This is a good thing as it ensures that any installed optic will be stable. Should the shooter want to tune fit further there are four set screws located on each side, front and back on the mount. In my case these did not need to be adjusted to obtain a tight fit. I have no doubt that this mount will return to zero if removed for cleaning. The cross pin ensures that the mount must be returned to the exact same position each time it is installed, while the tight fit eliminates play.

Installation of the lower handguard takes a little elbow grease but nothing strenuous. The lower handguard on the VZ58 is held on by a pin that has to be driven out. This too is an advantage of the VZ design guaranteeing a tight fit for both the original handguard and CNC unit.

One tip for VZ owners who are swapping handguards with various military/commercial replacements is that the pin does not have to be driven all the way out to clear the retaining tab on the original forearm. However, the CNC Warrior unit does require it to be completely removed so their provided roll pin can be used.

Once the pin is driven out the factory lower the handguard simply slides off the rifle. Reverse the process to install the CNC Warrior unit. This fits much more tightly than the factory forearm so I had to whack the tab extending into the receiver with a rubber mallet to finish driving it in place. Again, this is a great design and ensures tight fit with no play.

The replacement roll pin was a bit difficult to start so I pinched the end slightly in my vice. After that I was able to drive it on with some effort. You will want to use a brass punch to ensure that the pin does not deform. Once completed I checked the upper and lower for play and as expected I found zero movement. The two components align perfectly with one another and with the rifle barrel. 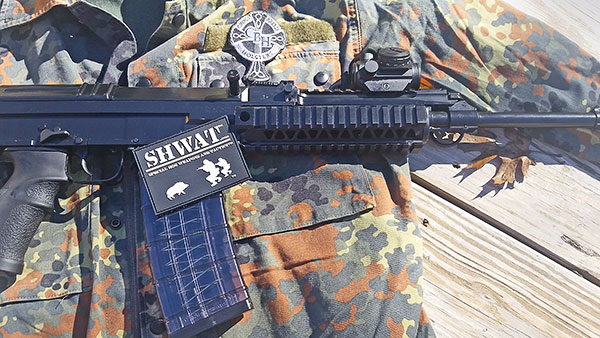 The final result is an exceptional rail system for the VZ58. It has plenty of rail space for optics and accessories. Coupled with a low profile optic like the Aimpoint T1 or the Bushnell TRS-25 shown, the iron sights cowitness. This is a great advantage to the CNC Warrior mount over cheaper, polymer handguard options that are too high for cowitness and will not retain zero if removed for cleaning. The rail system slightly increases the rifle’s weight, but not enough to affect shooting this already lightweight gun. My rifle as shown still weighs less than a stamped AK-47 in its factory original configuration. This in a platform that is more accurate, softer recoiling, has a better trigger, and is chambered in the American standard 5.56 caliber.

Don’t get me wrong, I love the AK in both 7.62×39 and 5.56. However, I have come to believe the VZ58 platform to be an accurate and enjoyable alternative for fans of Eastern block weapons. If you have a VZ58 rifle or pistol, you owe it to yourself to investigate the modern options that make this excellent weapon system even better. I’m very pleased with my purchases from CNC Warrior. I’m happy with the quality, pricing and service. The result of all this? The VZ guns I loved already I now love even more.