Three Times the Fun: Hogs, Deer and Coyote Fall to the Remington R-25 in .243 Winchester 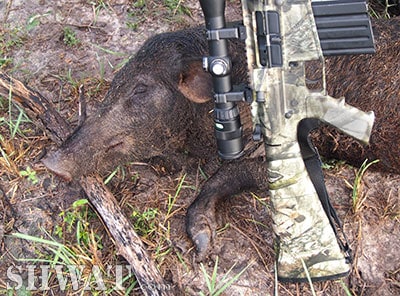 On a recent deer and hog hunt with Mellon Creek Outfitters near Corpus Christie, Texas, I and three other writers on the hunt were given out choice of rifles:  several bolt actions, a couple different DPMS AR’s in .308 Win, and a neat looking little AR done in a camo finish.  I picked up the AR and examined it.  It was a brand new Remington R-25 chambered in .243 Win and topped with a Trijicon AccuPoint 2.5-10x56mm scope.

Given my preference for tactical hunting, I figured I had found the rifle to start my hunt.

And I was sure of it after 20 minutes at the range, the rifle working flawlessly and dropping bullets into a half dollar sized grouping at 100 yards with ease.

The next morning, right at dawn, my hunting guide and I spotted it at the same time– a dark bump maybe 500 yards down a pipeline corridor. A hog, we realized as soon as we got our binoculars to our eyes, with its nose to the ground and rooting around for some breakfast.  My guide parked our pickup just beyond the gas pipeline cut, a 70-yard-wide opening cut through a jungle of Texas mesquite and brush.

I got out and slipped a magazine into the R-25, pushed in the bolt latch and heard the metal slam home.  There was a slight breeze, but it was in my face, and I had acres of cover between me and that dark bump. Time to close distance with a hog stalk.

I stayed several yards inside the thick, leafy brush, going slowly to make as little noise as possible. I got to within about 100 yards, and peeked out to make sure the hog was still there—and now there were two hogs! I made my way through the last 40 or 50 yards of pickery Texas brush, then eased out into the opening.

One hog was facing away from me, no shot there, and I couldn’t see the second hog. I took a step forward, when he suddenly reared up from behind a small knoll and grunted once in surprise, having caught sight of me. I swung the R-25 from port arms to firing, slapped the AccuPoint’s green reticle dot on his shoulder and squeezed off a quick shot. The two boars immediately ran, their hooves flinging up clumps of damp earth. My hog headed to my right, towards the other side of the opening, and then looped back, and I fired twice as he turned and then headed into the brush.

My guide showed up a minute later and we tracked the hog into the brush.  That hog went less than 30 yards, the 100 grain Remington .243 Core-Lokt Ultra Bonded bullet (from my very first shot—the other two were misses) having punctured him at mid-shoulder and gone through and through.

Taking hogs is fun. Same for deer, so the rest of that day and the next morning were spent hunting the more svelte species. The ranch we were on was enrolled in the Texas deer management program and had way too many deer.  So many, in fact, the outfitter had secured 500 extra deer tags—and he could get more if needed!

I killed three deer with this tactical hunting rig:  a spike buck at 130 yards, then a doe at 100 yards, and finally a decent smaller buck at 300 yards.  All dropped with one 100-grain Core-Lokt bullet into the heart-lung area, though the 300 yard buck ran about a football field in distance before he fell over.

Just before dark it was time to change it again so I killed a coyote at 200 yards!

After this Texas hunt I was so pleased with this kit I had to get one for myself. The Trijicon AccuPoint is a perfect match for this rig.  It delivers clear edge-to-edge images and pulls in impressive amounts of light in overcast and other low-light conditions. When I shot that coyote, for example, my guide and his above-average binoculars couldn’t make out the ’yote at 200 yards in the fast fading light. Me? I could see the contours of his pelt.

Dialed down to 2.5 power, the AccuPoint gets on target fast for stalks and hunts up close. Spin up the magnification for longer shots all the way to 10 power.  Also, the AccuPoint has a tritium lit reticle, so no batteries are needed. The tiny green dot on the reticle is very precise, helping you get on target fast while not obscuring your intended target.

I began my hog hunting with AR’s chambered in .223 Rem., and they are still among my favorites for taking on wild swine.  But I’ve come to be a real fan of the .243 Win. Then, there are the differences in foot pounds (Ft-Lb), the kinetic energy a bullet is carrying at any point along its path.  The chart tells the story: The .243 just dominates the .223.

Now, foot pounds is only one part of the equation for how well a bullet does or does not put down game.  How a bullet actually damages tissue is a huge part of that question. Still, a higher rating of foot pounds means a bullet is hitting your intended target with more energy than a bullet at a lower foot pounds.

The .223 Rem has killed all sorts of big hogs and large bucks and will continue to do so.  But I like knowing that, all else being equal, my R-25 in .243 Win is going to hit that big pig substantially harder than the .223.  Especially beyond 200 yards. In fact, given the Ft-Lbs revealed here, I am not going to try the shot on the deer or especially the generally-tougher-to-kill hog with the .223 at 300 yards.

The R-25 has a clean breaking, single-stage trigger.  It also has a 20-inch stainless steel barrel, so it’s nifty enough for walking and stalking through the bush, but has enough length to reach out to longer distances, too. Core-Lokt bullets have been around for over 70 years, in large part because they get the job done.  The softer lead point expands nicely while the “core-lokt” jacket secures the rear of the bullet so it can punch on through.   And there are many, many other ammo choices for the .243 Win, for hunting everything from prairie dogs to big deer and hogs.

One problem with this rig:  Remington recently debuted the R-25 Gen II rifle, technically making the Gen I that I have obsolete.  But a quick check of the Internet finds many of the Gen I R-25’s for sale. New ones can be had at really good prices as retailers and distributors make room for the Gen II rifles. Used models are available, too. The Gen II rifles will be offered in .243, though initially the rifles are being made only in .308 Win.