The Remington Model 783: A Big-Game Rifle…At A Bargain Price!

The last couple years have seen most of the major gun makers add a bargain-priced bolt-action rifle or two to their hunting line up. I have to admit, I’ve viewed these rifles with some hesitation. Oh, I like the prices–$400 or less for a hunting bolt, when $700 and up and has been the norm for a long while. But my “education” as an All-American Consumer has been that a lower cost usually equals lower quality, especially where it matters most.

So a bargain-basement retail price would mean a marginal rifle, I figured, one that could throw some lead but not your first choice for a hunt.

Well, my consumer “education” was wrong, certainly when it comes to the Remington 783, Big Green’s price-friendly bolt action for hunters.

I spent two and a half days using a Model 783 at the range and on a deer and hog hunt, and that’s how I came to re-adjust my consumer sense of price versus quality. The 783, I found, was damned accurate, easy to operate, worked without a hitch, and is far better than a merely functional rifle.

My hunt was with Mellon Creek Outfitters, Refugio, Texas, and was sponsored by Remington and the optics maker Trijicon. My hunting rig was a Model 783 chambered in 30-06 Sprg, and topped with a Trijicon AccuPoint 2.5-10×56 scope sporting a Mil Dot reticle. Ammunition was Remington Core-Lokt firing 180 grain bullets.

We started off at the shooting range, and I pulled off 15 rounds or so to get used to the rifle and scope. I had to make a couple adjustments to the scope, but soon the 783 was driving in three shot groups of 1.5 inches or less at 100 yards.

This was a management deer hunt, a cull, really, on 100,000 free-range acres on a Texas ranch with way too many deer for good herd management; we were instructed to shoot does, spike bucks, and older bucks past their prime. Any and all feral hogs, too.

I shot my 783 offhand, from shooting sticks, and braced against fence posts and trees and the mirror of our pickup truck. My shots ranged from a 311-yard shot at a small doe to a 20-yarder at a running hog we scared off a watering hole, and a number of shots at deer and hogs between 100 and 200 yards. In all, I took 13 deer with the Remington 783 and three hogs. (All deer were donated to a local food bank, the hogs distributed among our hunting group.)

I hit everything I shot at and put it down with one round, including that doe at 311 yards. The exceptions being the water hole hog (required a second shot to finish him) and a deer I just flat-out missed at 90 yards when I hurried the shot.

During all that shooting, plus another 20-round session back at the range on Day Two, the 783’s bolt worked fine. The cylindrical steel bolt is a stout 0.695 inches in diameter. The ejection port looked narrower than any other bolt action port I could remember, and I was worried the port would catch ejected brass. But that never happened and all brass was ejected fine.

The 783 features a steel detachable magazine with a steel latch. The magazine snapped in easily and popped out cleanly. Cartridges slid into the magazine without a hitch. The 783’s Crossfire trigger has a center lever that has to be depressed before the trigger can be pulled back. The trigger on my rifle pulled smoothly, with just a bit of creep. The trigger comes factory set at 3 1/2 lbs., but is easily adjusted by a shooter from 2 1/2 to 5 lbs.

The 783 has a 22-inch barrel with its .270 Win, 30-06 Sprg, and .308 Win models, a 24-inch barrel on the 7mm Rem Mag and 300 Win Mag versions. The carbon steel barrels are contoured, button rifled, and free floating. For rigidity, the stock contains a high nylon fiber content, and the fore piece of the stock is pillar bedded with two aluminum inserts.

The 783 doesn’t have sights, but is drilled and tapped for a scope.

Problems? The bolt on my rifle worked a little hard at first. I put a couple of drops of oil on the lugs, and that plus the shooting loosened it up.

True, the 783 is no beauty. Black barrel, a black receiver, a black injection molded synthetic stock, and a black recoil pad. I wouldn’t mind a little color somewhere—though the deer and hogs certainly wouldn’t have known the difference.

That synthetic stock, by the way, took a decent banging around, on trees and brush, a couple of wooden fence posts, and hit the ground a couple times. I wiped the stock clean with my hand–good to go.

The rifle weighs in at 7.2 pounds (7.3 pounds in the 7mm Mag model), and with scope, sling, and ammo is easy to carry for a day’s hunting. 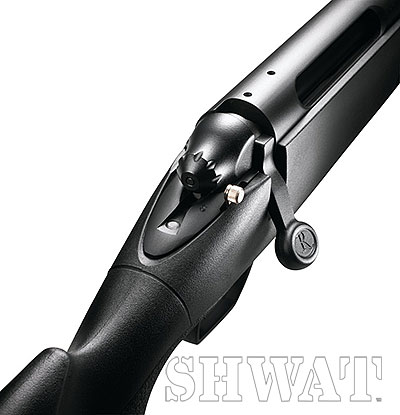 For 2015, Remington added two different models to the 783 line: Model 783 Camo finished in the Mossy Oak® Break-Up™ Infinity™ Camo Pattern; and the Model 783 Compact with a 20-inch barrel and an overall length reduced by approximately four inches.

While the initial caliber offerings were pretty slim—30-06 Sprg, .308 Win and .270 Win—Remington has expanded these to most standard hunting calibers up to and including .300 Win Mag. The Camo and Comact version also show MSRP’s of $50 more than the standard 783.

Take a $260 rifle, put on $400 in optic and mounting hardware, and you will have a very solid hunting rifle capable of taking down most any big game on the North American Continent (especially if you opt for a model in .300 in Mag), for under $700. For where I am from and from what I hunt, that’s a hell of a deal.