Hearing Protection isn’t sexy. Of course neither is your ears ringing or having to ask “what?” “WHAT?” Soldiers, hunters, competitive shooters – all have hearing damage among their ranks. When shooting and hunting, most of us try to mitigate that as much as possible, but using hearing protection can come at the cost of situational awareness. For a hunter, this could compromise communication with others, and even cause you to flat miss an opportunity. Technology has brought us a long way, and one product I’ve seen improve over the past four years is the Etymotic Research ER125-GSP15BN GunsSport Pro series High-Definition Electronic Earplugs. They have their limitations, but they are better than when I first saw them and they solve some real world problems. I’ll address real world concerns and an urban legend about adequate hearing protection or “ear pro.”

Speaking of the so called real world, it gives us plenty of reasons to despise the various incarnations of hearing protection or “ear pro.” Foam plugs can be really effective at blocking everything. As a hunter, I don’t want to block everything. Even when shooting targets I want to communicate with my shooting buddies. Getting plugs properly inserted can be a pain and leave you unprotected.
Let’s say you wear ear muffs. In the summer they get hot in a hurry. No joy. Want that perfect cheek weld and eye relief on your precision rifle? Odds are your muffs will interfere. Don’t forget about the other “pro” we know we should use – eye protection, yet the temples of your glasses can break the seal of the muffs to your ear marginalizing their effectiveness. To be fair, muffs can help keep you and your ears warm when it’s cold, but that doesn’t mitigate the rest of the problems. Ditch the muffs and don a beanie and you’re warmer anyway. Ever tried to cram muffs on under a helmet, even a really great one like a Team Wendy helmet? Marginally doable, but no fun for sure.

Read all that and you might conclude I’m anti-ear muffs, but in fact I love my Howard Leight Impact Sport electronic muffs. I started wearing them after my ears started ringing. I’d used hearing pro almost religiously for years, but when tactical hog hunting I started using the big name silicone ear pro that was supposed to work off mitigating sound pressure through a small open tunnel. I don’t know if they are a complete farce, or if mine didn’t fit quite right or what, but I wish I’d never bought them. In addition to being more effective at decibel reduction, my electronic muffs amplify ambient sounds like whispers, hogs munching on farmer’s wheat, etc., but when a loud spike of sound hits (BANG!) they block it. But as muffs, they do all that good stuff with all the drawbacks mentioned before. So, wouldn’t the ultimate solution be the same technology but tinier, fitted into my ear canal?

I first tried out that concept as build by Etymotic in 2011 at the first ever Silencers Are Legal Shoot in Dallas. Odd, you think? Not really. Silencers are phenomenal but there are far too many variables to simply assume you’ll never need hearing protection once you’ve bought a suppressor. That’s a topic for another day, but you don’t need a $200 tax stamp to own Etymotic Gun Sport Pros and as far as I can tell they are legal in all 50 states.

In 2011, the Gun Sport Pros seemed like a good idea, but they struck me as a bit awkward. The newest iteration has a greatly improved form factor.

Etymotic Gun Sport Pro electronic earplugs operate in two modes, selectable by a tiny throw lever. In “Lo” mode you basically get normal levels of audio fed to your ears until some sound exceeds safe levels. Etymotic says that continuous loud noise is automatically reduced by 15%. Outdoors, this mode nicely worked while I was getting in some long range practice, including .338 Lapua Magnum.
The “High” mode works like my Howard Leights, amplifying soft sounds and conversational speech. Unlike the familiar Impact Sports seen at every shooting event I’ve been to, there’s no volume adjustment, but I didn’t miss that feature either. This is a great mode to hunt with.

In both modes you get what Etymotic calls “High Definition” sound. The 40 Hz – 16 kHz bandwidth gives you true high quality sound. A host of high tech, high end miniaturized electronics makes this possible. Specs aside, the sound quality is really good. 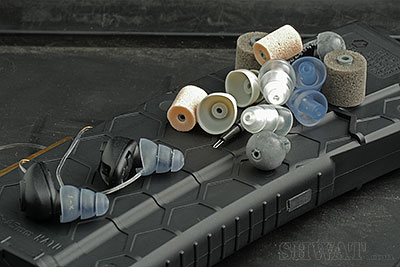 A surprise was the variety pack of accessories that came with the electronic earplugs. The GSP has replaceable filters to deal with pesky things like ear wax and other debris build up. That’s a testament to the level of development, but the fact that they ship replacement filters with the GSP adds to the value equation. A plethora of eartips are included to best match your own ears.

Now, to urban legend. Rumor has it that in order to have proper hearing protection you must use muffs to insulate skeletal bones that transmit sound to your inner ear. I asked Etymotic about this. Patty Johnson, Au.D., Director of Audiology answered:

2. With a blast such as gunfire or an explosion, the pressure wave (and sound is pressure) hits the whole body, including the skull. This vibration moves through the inner ear and is heard as sound. It’s not at all unusual for gunfire to be around 160 dB. So even if a person had a maximum conductive loss, 100 dB of that 160 dB blast would still reach the inner ear. In order to prevent that, you’d have to shield the entire body. Note: This is why there are limits to how much sound a hearing protector can provide.

3. When maximum attenuation is needed, the way we achieve that is to wear earmuffs over earplugs, but there’s a limit to how much additional protection this provides. Surprisingly, it’s about 5 dB on average. So if a person wore earplugs that provide 20 dB of protection, and wore earmuffs over that, the total protection would be about 25 dB. For those working in extremely high-noise areas where maximum protection is necessary (such as the flight deck of an aircraft carrier), deeply seated foam earplugs are used, along with heavy-duty earmuffs, and they still need to limit exposure duration to reduce their risk of noise-induced hearing loss.

4. Wearing earmuffs when shooting doesn’t protect more than earplugs. The key for either protector is to get a good fit. In some instances earmuffs are worse than earplugs when shooting because the pressure blast can knock the muff away from the ear, breaking the seal to the head and resulting in little actual protection.

I wish I could say the Gun Sport Pros were perfect, but they aren’t. The Achilles tendon is the battery. The tiny battery should last about ten days, which is actually reasonable considering their diminutive size. That same small form factor made my first outing a one sided event, however. I’d placed the batteries in the devices but left the battery tray/door open, per the instructions, to leave them “off.” There’s no power switch, so that’s how the instructions go. However, when I opened the little carrying cast at the King’s Arsenal private outdoor range one of the batteries must have fallen out. To answer the obvious question, yes, with no battery (or a dead one) these effectively function as ear plugs. I didn’t bring extra batteries, so that was a real bummer. Nobody likes messing with batteries, but that’s simply part of owning these high end electronic earplugs.

Some have noted the Gun Sport Pros are insufficient for indoor range shooting and I don’t doubt it. When outdoors standing in the direct line of blast from an aggressive muzzle break on a 5.56 AR-15, I had to reach for my muffs to wear on top of the Etymotics. I am kind of paranoid like that. On the other hand, at an indoor range shooting .22s to qualify for my NRA Instructor rating, they were perfect in the Normal mode.

While I’ve only had these a few weeks, I have to say that in my quest for excellent hearing protection that doesn’t adversely impact my hunting, I’m pretty pleased with these. They are comfortable, effective at blocking what I want blocked and amplifying what I want to hear. As of now, they are my first choice in hearing protection. They are pricey, $299. But compared to most of three years of ringing ears and counting? A real bargain.