Rugged Suppressors may be a new name in the sea of silencer companies making a splash in 2015, but their roots are deep. President and Surge 762 designer Henry Grahm owned SWR Suppressors years ago when I first ran across him. So when my friends at King’s Arsenal invited me to test drive the modular Surge 762 suppressor, I loaded up four cameras and headed out to film the demonstration. 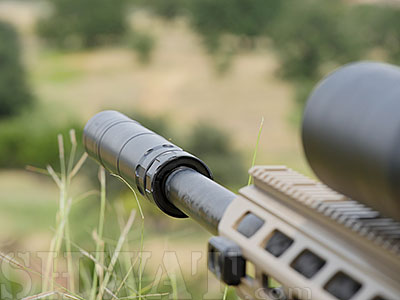 Michael Derdziak from Rugged Suppressors drove to West Texas with a few cans to test drive. I brought Grandpa’s Gun, the 300 Win Mag precision rifle that King’s Arsenal rebuilt for SHWAT™. We all met at the 600 yard private King’s Arsenal Range. We would run the Surge 762 on the 300 Winchester Magnum, 300 Blackout (both super and subsonic) and 5.56 supersonic full auto. This wouldn’t be scientific test, but a demonstration with lots of ammo downrange. Who wouldn’t want a piece of that?

The Surge 762 was designed to be something of a one size fits all modular silencer. The idea of using a .30 caliber suppressor on 5.56 guns specifically is nothing new. However, Rugged Suppressors wanted to optimize the Surge 762 for each caliber and settled on a ADAPT™ modular design to get there.

The ADAPT™ module allows the can to be configured as either a 7.5 inch model or a 9 inch model. There is a difference in sound reduction that I could hear. When Rugged Suppressors tested the Surge 762 they found 138.4 db on the shorter version and 134 db on the longer configuration. The module simply threads in and out of the muzzle end of the suppressor body. 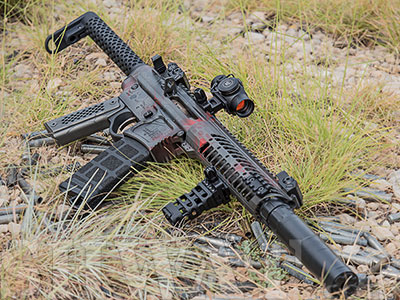 Coving the muzzle end of the module, or the suppressor itself when the module is removed, is one of two interchangeable front caps. The Surge 762 comes with a 7.62 cap (.30 caliber diameter exit hole) or you can purchase a 5.56 front cap to optimize for your smaller calibers.

The mount and the expansion chamber are monolithic, made from a single piece of 17-4 PH stainless steel. The mount features a dual taper locking system to eliminate any possible wobble during firing. The result we observed was consistent accuracy at 600 yards.

So if you’re looking for multi-purpose silencer rated from 300 RUM down and rated at full auto, the Surge 762 from Rugged Suppressors is one you’ll want to seriously consider. For an MSRP of $1300 you get the equivalent of multiple cans but pay for only a single $200 NFA tax stamp.