My Saskatchewan duck hunting experience with the Remington V3 Waterfowl Pro shotgun and Sure Shot Game Calls convinced me that it is an ideal shotgun for hunting with gloves. And since most bird hunting opportunities involve wet or cold, or both, that makes the V3 an ideal shotgun period.

I was so impressed during the V3 duck hunt that I did not waste any time after returning from Canada to get my hands on a Remington V3 Waterfowl Pro with Burnt Bronze Cerakote and Mossy Oak Shadow Grass Blades camo. Oh, it’s nice-looking!

Stacking the Deck Against the Remington V3

I was confident this shotgun worked well when moderately cold and wet weather, but what about really cold?

Fortunately, I didn’t have to travel far to test this. I picked up the V3 and prepared to disassemble it, clean it, and remove all oil in preparation for cold-weather shooting. I stopped myself. If I was going to do a good test, why not give the cold all the advantages I could? To further stack the odds in favor of the weather, I coated the action with more warm-weather gun oil, the enemy of all semi-autos in low temperatures.

The cold, clear night had dawned into a cold, bright morning. Temperatures were warmer than I had hoped, a balmy -17º F. Still, that would be cold enough to make it a reasonable test. I pulled the Remington V3 out of its case as soon as we arrived, so it could cool down while we set up.

By the time we got snow cleared from table and equipment, shells out and ready, and spent some time talking, the gun was cold as the ambient temperatures. The oil in the action thick as molasses.

One of my sons loaded the V3, and a clay pigeon became a puff of dust against the cold blue sky.

We shot for several hours until the mercury rose to an almost tropical 12 degrees above zero. The V3 functioned perfectly. Now for the second stage of the test. A trip into the Arctic Bush caused a delay of a few weeks, but then my sons and I pulled out the V3 again. Leaving it oily and loaded with carbon from our practice session, we headed up the mountains in search of ptarmigan.

Emerging above the tree line, we began searching the dazzling white landscape for the white birds. Again, nature refused to cooperate with our test, temperatures sitting just above zero. The day was so beautiful, though, we couldn’t complain.

For the most part, the chest-deep snow (deeper in some spots) held might weight. Occasionally the surface crust gave way and I engaged in some comic floundering to get back on top. Gavin had snowshoes, but Logan and I did not. By the time the excursion was over, I sorely wished for a pair of skis. 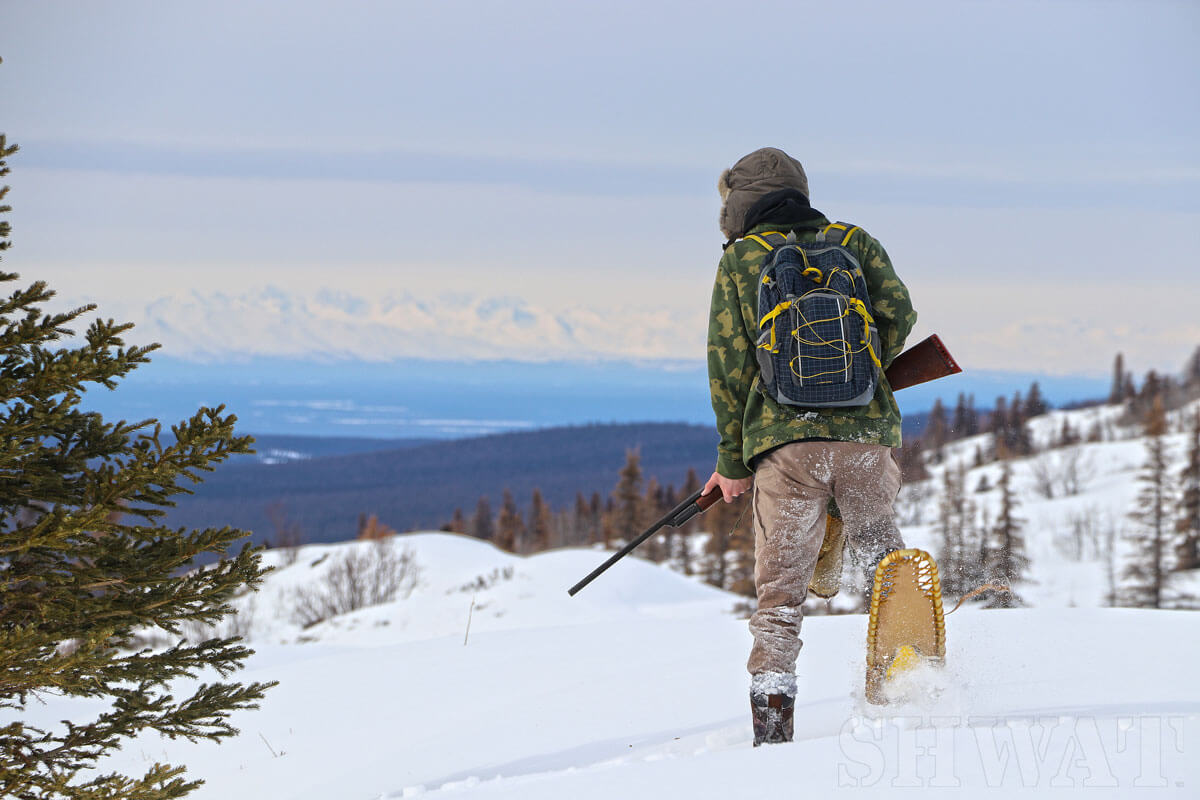 We soon flushed our first flock of rock ptarmigan. Beautiful birds, rock ptarmigan wear pure white in winter except for their black beaks, and eyes. Males have a striking bright red eyebrow and black tail band. Some have black claws, some have white. Even against the blazing snow, they looked a clean, perfect white.

We were struggling up a sharp rise in the snow, and the birds were in a scattering of very low willow brush on the crest of the little ridge. They flushed immediately. Fortunately for them, we were not in a position to shoot safely, as we were assisting each other in the climb at that point.

The ptarmigan flew low along the ridge to our right. Logan was in the lead with an early 1940’s Western Field Pump 20 gage. I told him to follow the rim in the direction the ptarmigan flew. I would drop back to the foot of the rise and move ahead in the same direction. I hoped to get underneath and ahead of the birds and flush them back toward him, or into the flat snowfield beyond the rim of the ridge.

I reached a point below more willow on the rim near where I had seen the ptarmigan landing. Two shots rang out but they weren’t mine. Turning, I saw a white bird dropping from the sky. Several ptarmigan had remained hunkered down in the snow when the others flew. These stragglers had just flushed. Logan dropped two in flight and then continued heading in my direction, along the rim above.

At that moment, the ptarmigan above me burst into flight. I had not removed my duck plug from the Remington V3, so I shot three birds, threw a shell into the action, hit the oversized bolt release, and dropped a fourth. Just then I saw a white bird sailing above the rim, above me. I threw another shell into my action as I heard a report from not far away. The ptarmigan tumbled from the air, then slid down the face of the rise stopping at my feet. Logan had arrived and taken that bird. 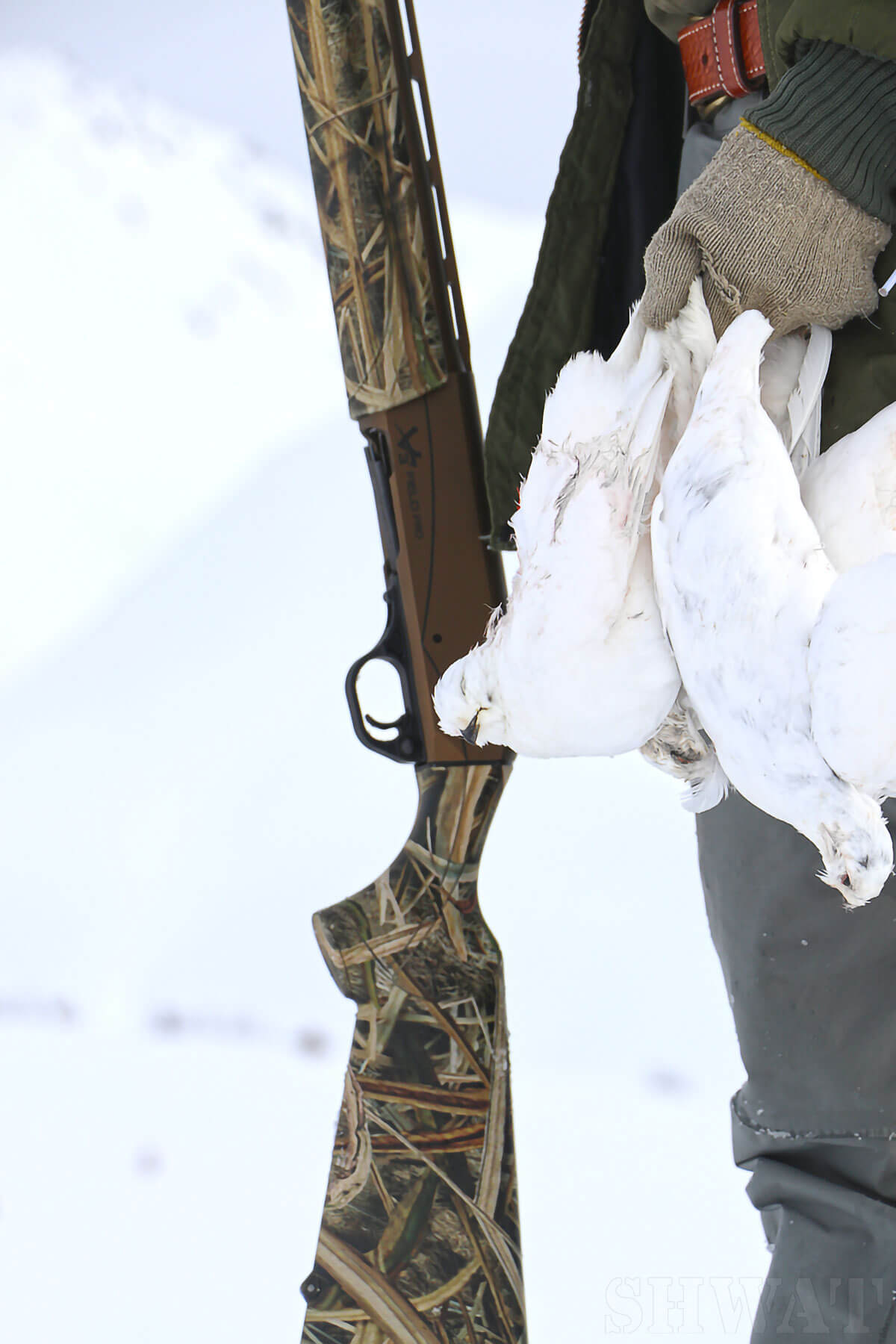 I found again that the Remington V3 pointed effortlessly and naturally for me. I did not have to think about getting on target, it just happened. Wherever I wanted to shoot, the green glow of the fiber-optic bead magically lead the way. I found it easy to add a little extra lead and target the heads of these small birds to avoid damaging the meat.

We did not follow the remainder of this flock, preferring not to wipe it out. We gathered the seven birds we had shot, half of which had slid to the base of the slope, and climbed back up.

Logan passed the Western Field to Gavin, and I handed off the V3 Waterfowl Pro to Logan. Gavin said he thought he saw a ptarmigan at the base of a stunted spruce some 200 meters distant. Squinting skeptically across the blinding whiteness, I told him he was welcome to check it out.

As Logan and I stood discussing the shooting we had just done and opined about the unlikelihood that Gavin saw a white bird at that distance, we watched Gavin’s progress across the snow. He approached to within 25 meters of the tree, and then we saw his shotgun snap to his shoulder. The report, delayed by the distance, rolled back to us. Soon he was snowshoeing back with a ptarmigan! By now the sun was fully over the mountain tops and temperatures had risen considerably to the low teens. We were forced to shed some clothing due to the sun and the strenuous effort of traveling in deep snow.

We hiked further, ate our lunch, then headed back out. There were several times that a large portion of someone’s body disappeared beneath the snow without warning. Barrels were held upward, but sometimes keeping the muzzle pointed safely away from others during an unexpected plunge meant the shotgun disappeared as well. We had to stop a couple of times and carefully melt the snow from a bore to prevent a bad accident.

We began to hear the calls of ptarmigan on all sides, but we did not make a great effort to find the ones that were out of our way. We had been hunting a fairly level terrace across the face of the mountain. Heading out, Gavin and Logan walked the outside rim and I followed the face. As I walked, paralleling them at roughly 300 meters, I saw both shotguns come up. A second later the faint pops floated to me. Within a minute, both Gavin and Logan were holding up white specks for me to see. They had run into more ptarmigan. We converged, snapped some photos, and then finished walking out.

The Remington V3 Waterfowl Pro performed as I had expected. With medium weight oil in a dirty action, a certain recipe for a cold-induced failure to cycle, it still ran flawlessly. Even when snow had gotten in the action, the V3 functioned without hesitation. With synthetic stock and metal protected by Cerakote, I didn’t have to worry about sticking it butt-down in the snow any time I needed to put it down.

Logan was highly impressed. He felt that the V3 pointed naturally, had very low recoil, and was ridiculously easy to hit with.

When hunting birds in Alaska, you have to be prepared for anything. This shotgun is. For me, the Remington V3 Waterfowl Pro is the right choice for Alaska, or anywhere else. I have to wonder what it must be like hunting with it where you live!