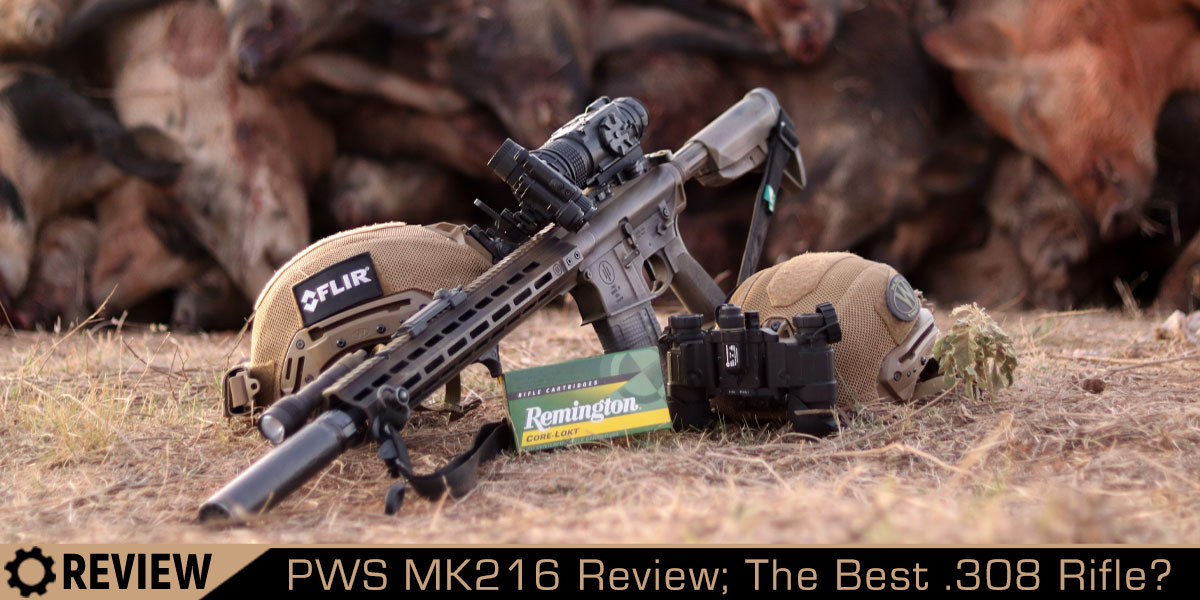 In the spring of 2018, three years ago, I ordered my first PWS. The MK216 MOD 1-M chambered in .308 WIN. Funnily enough, I outlined the reasons for my purchase decision in my .233 PWS review published in May of 2019. I concluded that review with a promise to publish my thoughts on the Primary Weapons Systems MK216. I thought that I would’ve published said review right after my next hog hunt, but alas, here we are 21 months and dozens of hunts later. Life may have gotten in the way of me getting around to this review, but it did not keep me from beating the ever-loving crap out of the rifle. How has it been doing, you may ask? That’s just my last four hunts. And as you will see over the course of this review, I have not been kind to it. It has been treated worse than any rental car I’ve ever driven and far worse than any firearm I have ever owned or used. Why is that? Honestly, I don’t have a good reason. I wasn’t trying to torture test it, I wasn’t curious how far I could push it, and it wasn’t given to me. I’ve never received anything from PWS, and other than speaking to a sales rep when I ordered this back in 2018, I’ve never corresponded with anyone at the company. Really, I had so many other projects prioritized that I didn’t take the time to baby it, and it kept chugging along so I didn’t worry about it.

So, what prompted me to finally write this review? I decided to clean the MK216 today. Once disassembled, I became so impressed that this thing had been working in the condition it was in, I became inspired to share. The round count has not been well tracked, but I believe it to be around 5,500. The first 1,000 rounds or so I cleaned it often, generally every 200. Then for no intent or purpose, I just stopped cleaning. All of these rounds I shot with a suppressor on the rifle. I have not shot a single solitary round unsuppressed through this rifle.

Around the 2,500 round mark, I dropped the rifle off at DFW Shooting Sports to have JD Devine mount a thermal and zero it before a hunt we had scheduled. Their gunsmith was so disgusted by the filth he saw, that he cleaned it for me, unprompted, and at no charge. True story. Since then, I just squirt some oil in it every few hundred rounds and go about my business. Now, this might be common practice for some people with their AR-15s, but from my experience AR-10s can be pretty finicky.

Playing Favorites with my PWS MK216

Being a writer for SHWAT, combined with my other endeavors, has its advantages. Generally, I have the latest high-end hunting equipment on hand for my choosing. While I don’t get to keep it, I can pretty much get my hands on anything I want for a hunt. But I choose my PWS MK216 every time instead of taking something else. Why? Because the PWS is excellent at stacking bodies (hog bodies). On a hog hunt, I need something that is accurate, reliable, and as tough as nails. That’s the biggest advantage I can have and that’s why I take the PWS.

Let’s back up to when I said the cleaning of this rifle prompted me to write the review. It was past the half-way point of the scrub down that I decided to FaceTime SHWAT Publisher Jonathan Owen to show him what I was working with. He has been on a few hunts with me this year and knows my love for the Primary Weapons MK216. Jonathan has seen this thing function without fuss but was unaware of my cleaning schedule and after seeing the filth on FaceTime he prompted me to write this review.

Before and After Cleaning

Here is a pic of the upper receiver and chamber before my first scrub down: I really wish I had better before and after pictures for you, but this review today wasn’t planned and I think that picture can give you an idea of what it was like. So, the cleaning led to the review, but what led me to actually clean it? My Geissele SD-E has been gummed up for a while, I could no longer really feel a defined wall on the 2-stage trigger so I just kept squirting oil on it before hunts. After the last hunt, the trigger became carbon locked and would not release or reset after I broke it free… So, I thought, “…maybe I should clean this thing?”

Let’s talk about how the cleaning went. The bolt and the BCG cleaned super easily. You need to reread my first PWS review. It covers how the Primary Weapons Long Stroke Piston System works and what its advantages are. One of those advantages is the ease of cleaning. Here is a picture of the bolt after coming out of a Harbor Freight ultrasonic cleaner with Simple Green (the purple one) in it: Yep, really clean. The bolt carrier was just as easy. This is due in part to the piston system and in part to the coatings PWS uses. My first big obstacle was cleaning the piston tube. Remember when I said I haven’t shot a round unsuppressed? Well, I also have never changed the gas adjustment from the 3-dot setting. It was locked on there something fierce. In fact, I thought I would have to throw in the towel and contact PWS support or get a real gunsmith involved to get it off, but brute force finally did the trick. Once removed, I thoroughly cleaned the piston tube with a .40 cal bore brush.

My next challenge was cleaning the chamber and upper receiver. It took three rounds of soaking and scrubbing, but I finally got it 90% spotless. Here’s what it looks like now: The lower was pretty interesting to clean. First I removed the trigger and got it in the ultrasonic. Then I gave that part of the lower some serious attention. Once finished I moved onto the buffer tube. If you look into a buffer tube you can clearly see where the buffer has been threaded into the lower. On mine, I couldn’t. It had so much carbon build-up, it surprised me that the firearm still cycled smoothly (sorry, no before pic on this). I was unaware that, that much carbon could build up so far back in the gun, but I guess it can. The inside of the buffer was really gross as well. However, after some TLC I brought it back to life. In Conclusion? The PWS MK216 is Tough as Nails.

Once cleaned I inspected the rifle for wear. Here is what I found:

I did an accuracy test of different rounds in my PWS MK114 review. I didn’t ever get around to doing that on this one, but here is what I can tell you: I know of four people that have bought this rifle based solely on my recommendation. One former FBI HRT member, one ex-Army Sapper SDM, and two civilians. All of which have reported sub-MOA groups. The feedback has been consistent and the rifle tends to like bullets in the 168gr bullets the best. As for me, I consistently put up quarter sized groups at 50 yards when zeroing thermals before hunts. On one of my more recent hunts, I hit a piglet at 392 yards that was on a full run. So, I’ll call that pretty damn good. What are you waiting for?

In conclusion, if you want a .308 WIN in an AR platform, there are amazing options on the market to consider. Although, if you are planning on running it suppressed, there is only one option in my opinion: The PWS MK216. Get yours here!