Is your favorite pistol brace equipped gun about to become an SBR and force you into the biggest gun registration scheme in American history? Just when you thought 2020 couldn’t get any weirder, the ATF decided that they can get more shenanigans under the wire as the 2020 clock ticks down. Let’s address the biggest issues and what you need to do to protect yourself in light of the the possible pistol brace ban. Or, better said, partial pistol brace ban.

Many in the shooting and hunting space have already sounded the alarm over the pending ATF pistol brace rule change. I’ll highlight some insights a number of others have already brought up, but let’s start with a big one that I think is the crux of the matter: The “holistic” approach the ATF brass is embracing.

The Holistic Approach to Gun Control Other than different handguards, you’re looking at the difference between a legal SBR and a legal braced pistol.

In what’s being spun as a “holistic” approach to regulation (A.K.A. “infringement” by some sage thinkers), the ATF bureaucrat leadership has embraced a novel approach to what may or may not make your pistol brace equipped firearm subject to the same category of regulations as machine guns. If your brace equipped firearm, taken as a whole, appears more suited to two-handed shooting from the shoulder, you’re in trouble if these rules are adopted.

Relating to or concerned with wholes or with complete systems rather than with the analysis of, treatment of, or dissection into parts. “Holistic medicine attempts to treat both the mind and the body.”

But try to find two “holistic” docs who agree precisely on a treatment regimen for a specific patient. Good luck. And the same will hold true with holistic determinations of your favorite pistol brace equipped gun. While holistic and subjective aren’t perfect synonyms, they are close cousins.

When it comes to things that could make you a felon, subjective criteria really shouldn’t be the deciding factor. Let’s look at some of the keys and how the holistic/subjective nature of this proposed brace pseudo-ban work out.

One of the components that could be under consideration by the ATF is the “Length of Pull” of braced firearm. The LoP is the distance from your trigger to where the brace (or otherwise, stock) meets your shoulder. So if your gun’s LoP makes it perfect for shouldering, well, the ATF says you have an Short Barreled Rifle (or Shotgun). So you might just have to destroy it, dispose of it, or enter it into the Federal Registry so they know where to find it. Oh, and don’t forget to notify them should you move.

But here’s a quandary – LoP for a 4’11” person might net a brace too short for a 6’4″ person to effectively use as a brace. So one man’s brace is another man’s stock. Makes perfect sense, right? Again, this is a subjective measure that could be leveraged by other factors. 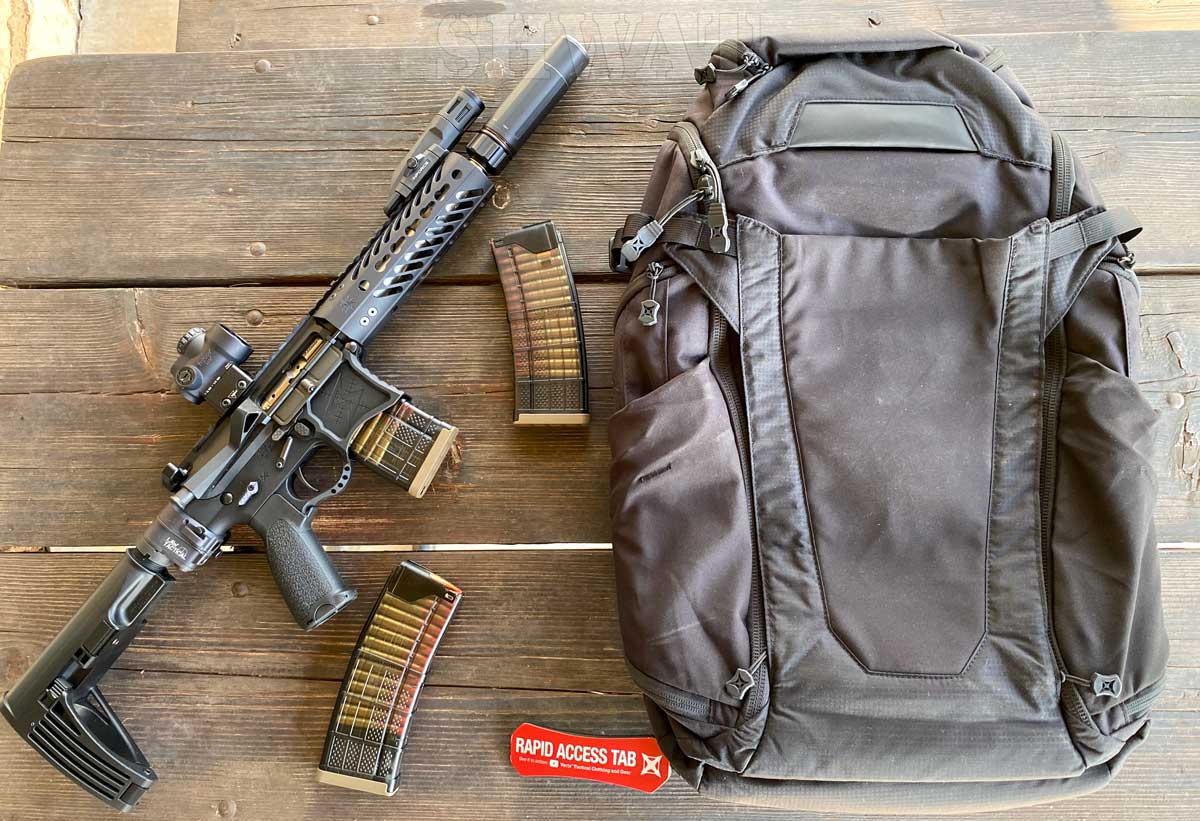 Pistols, the ATF reasons, wouldn’t have magnified optics that would be optimized for for shouldered guns. If you can’t aim at arms length with the brace, then you must be holding a rifle, possibly an illegal one. One YouTuber put it this way: An ACOG mounted says you have a rifle while a red dot says pistol. But, it’s more subjective than that.

However, in my opinion, that doesn’t add up either. Just a few years ago, as AR pistols began to gain popularity before braces were a thing, many gurus suggested “cheeking” the buffer tube to aid in accuracy. This methodology carried over to the pistol brace scene. I know of no debate, ever, questioning the legality or purpose of “cheeking” a braced gun. And if you can “cheek” it, you can run an ACOG or other magnified or thermal optic.

Clearly, the ATF rule makers argue, rifles use bipods, not pistols. But this, too, is myth. Just look at Encore pistols, or the Ruger Charger. These are purpose-built for shooting off bipods. Yet, put a bipod on a pistol brace equipped firearm, and holistically speaking, you’re probably weighting the scale towards SBR instead of braced pistol, per the proposed rule making. 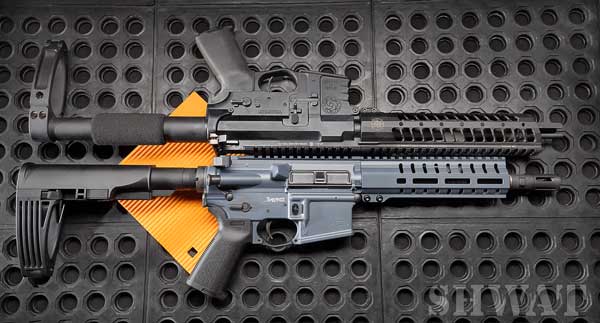 Does the caliber of your pistol brace gun determine whether you own a pistol or possibly soon to be illegal SBR? In the holistic world, it appears to be a consideration at this point. That’s pretty subjective. Magnum Research makes their BFR (Big Framed Pistol) in both .45-70, a 100+ year old rifle round, and the new .350 Legend. The BFR is a revolver, a pistol by every measure. Yet, it uses a rifle chamber. Again, this single factor doesn’t add up to an SBR with a brace instead of a stock. But taken together with the rest of your build, would it become a problem? Maybe, it’s hard to say, and that’s a problem.

Just because you claim something is clear (aka, unambiguous), doesn’t make it true. You don’t need a lawyer to know this. It doesn’t matter if you’re man or woman, engaging the opposite sex in a significant relationship conversation and you know that no matter how many times you reiterate the clarity of your prior statement, the other person won’t necessarily buy in. Clear to me does not equal clear to you. Same holds true for parents and kids. What seems obvious to one clearly escapes the other, regardless of protests.

Given the state of affairs in 2020, you might persuade me that the constitution is functionally dead. That aside, history shows the following understanding of the Constitutional test of law: If we the people can’t self-regulate (understand and comply with the law) the law is unconstitutional. People have to understand whether something is right or wrong to be held accountable for it. Now, the ATF cannot make law, they can only make rules. But the rules tend to hold the force of law. That would be a discussion for another day, but this holistic approach to gun control is a bad idea from its components to its legal foundation. Is that a holistic conclusion?

A quick look back will inform our next steps. This moment should motivate every single gun owner in America, even the NFA snobs who have mocked pistol braces from the beginning.

Most of a decade ago, Slidefire created the bumpstock, a toy basically. It allowed you to shoot faster. I had one, and let’s just say that retaining accuracy wasn’t really a big priority. It was just fun, facilitating the rapid conversion of cash to gunsmoke. The ATF said it was good to go, but then in the wake of a mass shooting, under the Trump administration, they reversed course. They decided they could randomly redefine a two-piece plastic stock, completely independent of the gun’s trigger. Basically, overnight bumpstocks became machine guns by the stroke of a pen.

And most gun owners yawned. “Who cares?” “Doesn’t affect me.” “Who needs them, anyway?” “Stupid toys.”

Yes, I’d agree, the bumpstock was pretty useless. But that misses the point. With a stroke of the pen, the rule makers at the ATF made felons of law-abiding citizens who failed to turn in or destroy or register their firearms that were previously not “machine guns”. Where was the outcry from American gun owners?

Here we are again, and the rule makers are stacking the deck against vastly more gun owners than before. They got away with it once, why not go bigger?

Some argue that a class action lawsuit is the solution. I’m not a lawyer, I don’t know. Either way, it’s going to take an proven organization like Gun Owners of America or the Firearm Policy Coalition to make any practical difference. Beware of scammers and upstarts who see an opportunity to line their own pocket books now, but if either of these two organizations have a shot at making headway, I’ll support them and I hope you will, too.

In the meantime, should you register your brace-equipped-pistol as an SBR? The ATF would like to bribe you by waiving the $200 tax stamp fee, briefly. That’s awfully kind of them, and a sweet trade-off to create a giant gun registry. Nowhere in history has a gun registry proven positive for law-abiding gun-owning populations. So no, as of this writing I wouldn’t suggest registering your pistol as an SBR. Bear in mind, I’m no lawyer and this isn’t legal advice. This is my opinion and does not necessarily reflect the opinion of SHWAT, LLC. There, I’ve covered my assets.

Other practical thoughts? If you’re concerned, red red dots, not magnified optics. Show off your gun without accessories that require two hands to run them (though that is also subjective!). Make sure you can aim with your braced it, one-handed. You get the idea.

I’ve worked with ATF agents in two states. While at the moment many would like to broadly blast them verbally, I won’t. I can only speak from my experience and the agents I dealt with were great. Sure, there will be some out there who aren’t, but the same could be said of your career field, too. That said, the ATF brass have all the hallmarks of political types. A political solution would be for the President to shut down this garbage. That would be President Trump, by the way. Biden made clear his intentions for gun ownership, and the pistol brace business would just be the beginning of the toll he’d like to take on the second amendment.

So, while the opportunity remains, call the White House, and be nice while expressing your desire to see the rough ATF reigned in: 202-456-1111. Or, use their email form. Or send a letter: The White House, 1600 Pennsylvania Avenue NW, Washington, DC 20500. Collectively, can we move the needle at the White House? I don’t know, they may be preoccupied at the moment, but can’t hurt, right?

Join the newsletters and social media of Gun Owners of America and the Firearm Policy Coalition to stay informed. And give money. I’m no stake holder in either of those, nor an affiliate, etc. But as an American gun owner like you, I too have a stake in the outcome of the pending pistol brace rule change. It will unquestionably affect far more than braces.