If Dirty Harry was looking for a bigger gun, the Smith & Wesson .460 XVR might have been his first choice. Every once in a while, even the most hard core tactical among us likes to go old school. One of the more popular ways to do this while hunting is to break out a big, heavy revolver that more closely resembles a cannon than it does a sidearm. It’s a whole different kind of challenge than when running with a 30 round magazine. 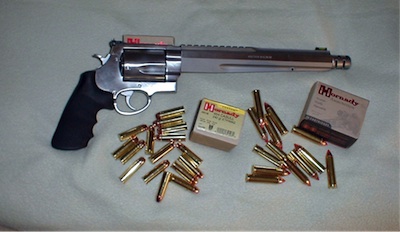 Of the larger caliber revolvers, I find the S&W .460 is best suited to my needs, which are – for this type of handgun – hog hunting, deer hunting, and just plain ole “plink’n.” The recoil is fairly heavy, yet quite controllable, to the point of allowing pretty rapid second or more shots. Not rapid in the sense of running a new TacCon 3 Mode Trigger, but rapid enough for a revolver.

Sometimes, here in the swamps of South Alabama, you can find yourself right smack in the middle of a whole sounder of big, irritated and vengeful hogs.  When this happens, it behooves one to be packing a smoke pole that can be totally controlled and be able to snap off  X ring shots quickly enough to ensure that he is not, shall we say, unzipped by said toothy swamp denizens.

Granted, there are innumerable pistol caliber cartridges on the market which are very capable of killing wild hogs, but I want (and you need) a combination of cartridge and gun that is readily and easily capable of (in police parlance) STOPPING THE FIGHT immediately – if not sooner. If you expect to get back home in one piece when you are hunting dangerous game, it is absolutely imperative that you have a gun and ammo that will stop the fight, first shot, every time. In my estimation – do your part when carrying a Smith & Wesson .460, stoked up with Hornady ammunition, this will be the end result of the hunt.

When you are pushing a 200 grain jacketed soft point bullet at 2200 feet per second and you do your part by placing the bullet properly, the outcome is pretty darn certain to be well in your favor. Picture that wild hog, or hogs, rapidly hoofing their way to that “happy hog wallow in the sky!” 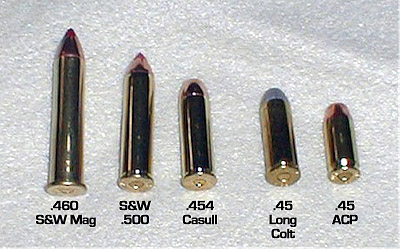 Having fired about 300 rounds in the Smith & Wesson .460 XVR, I am totally comfortable with the gun, its recoil, accuracy, sights and ammunition. I’m comfortable in my equipment, as well as my ability. As you well know, that is a large part of the equation – resulting in a big smile on my face and meat (or as “Uncle Ted” would say, ‘backstrap’) in the freezer.

Smith & Wesson Performance Center was kind enough to send me one of their excellent .460XVR revolvers and I fell in love as soon as I picked it up. XVR stands for “X-treme Velocity Revolver”.  Smith & Wesson claims that it has “the highest muzzle velocity of any production revolver on earth.”

The hand cannon is impressive to look at: a 12 inch barrel with muzzle compensator, scope base, fixed sights and even has a point under the barrel for installing a bi-pod or sling swivel. You know it’s a big gun with these rifle type features on a pistol!

With this beast, Smith & Wesson brought old school to the modern shooter with features like the muzzle brake, picatiny rails and more.  Even with the extra large frame, long barrel and heavy weight, Smith & Wesson managed to combine all of these aspects into a revolver that not only is very appealing to the eye but – despite the size of the bullet and cartridge – is also totally manageable and a pleasure to use. With this revolver

in hand, I would feel comfortable going after any game in America. So, yes, I’m convinced. Even in the land of high speed tactical hog hunting, sometimes, there’s just no school like old school. The .460XVR is an excellent caliber and revolver, and when teamed with Hornady’s great ammunition, culminates in a combination that has the wild hogs streaming for deep cover. Yep, it is big, heavy, has a right respectable recoil and throws a huge chunk of lead. Considering what kind of critter you are going after, all of the above are greatly outweighed by the peace of mind that accompanies me as I load, holster, and head out. Give it chance. As of yet, I haven’t gotten to plug any hogs with my .460, but I plan to soon and am really looking forward to getting it out in the woods and swamps.  Join me and try some old school wheel gun fun with modern power. It’s sure to put a smile on every tactical hunter’s face.