My Go-To Scope: The Trijicon VCOG A Tactical Hunting Optic That Gets the Job Done

There’s often a division between what some consider Tactical versus Hunting. In a lot of ways, that division is wrong headed. After all, the tactical derives from the military, and the military application of the tactical is all about putting down the enemy.

Of course, for the hunter, the deer or hog or elk is not the “enemy.” But the same general principles apply: put down your quarry as quickly as possible. So to say that Trijicon’s Variable Combat Optic Gunsight or VCOG, a 1-6x24mm scope, is only a “tactical” scope is to miss an important point. Whatever the quarry, the VCOG can get the job done. And while I don’t hunt “bad guys,” the deer and hogs I’ve taken with the scope, the scope’s overall performance and its ease of use have made it my go to scope, the one I reach for first.

Not that I approached the VCOG with such high hopes. As soon as the scope started making appearances at trade shows, Internet scuttlebutt condemned the VCOG as way to heavy and bulky. So I was skeptical when I had my first chance to use the scope.

However, what I discovered was a darned solid optic, not a lightweight one, but certainly not the brick the ‘Net had warned me about. At just ten inches long, it’s nicely compact with a lower profile than many other AR scopes. The 27 ounces of scope-plus-mount sits well to the back of the receiver, too, giving the rifle a nice rear-ward balance.

Trijicon makes no bones about it—the optic is made for combat-type applications. The horizontal bar on the crosshair, for example, equals approximately 18 inches across at 100 yards–the width of your average man as measured from shoulder to shoulder. Allowing you to easily center on, well, a bad guy’s center mass.

Yet, the VCOG was and is a regular on the 3 Gun tour. Which got me thinking: if it is made for combat and 3 Gunners are using it, why not hunting? Maybe not every type of hunting, but it must have potential in some hunts. If so, which ones? A trio of VCOG models are built around a particular bullet caliber and weight: the 55-grain .223 Rem; the 77-grain .223 Rem; and the 175 grain .308 Win. A fourth model is manufactured for the 300 Blackout. The .223 and .308 model reticles are available with a crosshair surrounded by a segmented circle or a horseshoe dot crosshair. The 300 Blackout model is only offered in the crosshair-with-segmented circle. All reticle variations are illuminated, with the crosshair and surrounding segments lighting up.

My test VCOG was made for the 55-grain .223 round; the reticle was the crosshair and segmented circle. I used the new Silverado .223 Rem 55 grain rounds made by Liberty Ammunition.

I mounted the VCOG onto a Katana Rifle, an AR manufactured by MHT Defense of Wedowee, Alabama. The attached, one-piece mount easily slid onto the Katana’s picatinny rails. I finger tightened the knobs and then, per the owner’s manual, gave the knobs a quarter turn with a flat headed screw driver. Done.

On my first visit to the range, I got the rifle hitting paper at 30 yards, then started to zero the scope and rifle at 100 yards. Zeroing was fairly easy thanks to large windage and elevation adjustment knobs that click cleanly and precisely, with each click moving the point of impact a half-inch at 100 yards.

The VCOG has Trijicon’s “integrated power fin,” the large adjustment ring at the back of the scope tube with a raised line or fin. It turns the power ring faster and smoother than the power ring on any scope I’ve used.

I got the scope hitting about 1.5 inch groups, but wind gusts were causing fliers, so I called it quits after 40 rounds. On my next visit to the range, I tried some different hunting-based scenarios. Given the size of the scope and it’s power range, it screams “hog hunting,” especially in areas of thicker vegetation, interspersed with pasture and mesquite—the kind of landscapes I often hunt in South and Western Texas. Here, you might get a 200 yard poke at a grazing hog or a 50 yard all-of-a-sudden shot when a big boar trots out of the brush.

I set up a target at 100 yards. I placed another target on a cardboard box at 60 yards, the target about one foot above ground level. Both targets were black with orange diamond-shaped centers. Then, I sat on a pad and rested the rifle on the “V” of a Primos Trigger Stick, and set the VCOG’s magnification level at four power.

I took a couple of deep breaths and then twisted my body from right to left as if I’d just spotted a hog. Pivoting the rifle on the Trigger Stick, I lined up the crosshairs on the 60 yard box target and shot off a quick four rounds. Then I swung the VCOG onto the 100 yard target and let loose with four more shots.

I did that sequence twice more, after replacing targets, once with the VCOG set on the 4 power illumination setting, once at 6 power. The VCOG got on target quickly, especially when the crosshairs and segmented circles were lit up. Images were crisp and clearly outlined, at all yardages. Lighting ranged from overcast to sunny, to right before dark. At the 60 yard target, I strung out my four-round bursts under three inches, and under two inches at the 100 yard target, with a flier or two in there, also.

Had I been hunting? Dead hog or deer. 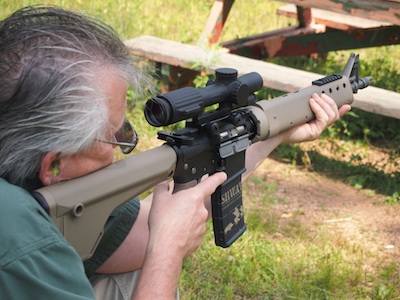 On a recent deer hunt in Mississippi, I spotted a pair of bucks several hundred yards away from my stand, milling around in shadows under trees. I couldn’t tell if either of the bucks had enough horn to be legal shooters, so I climbed down from my stand and, using available cover, got a lot closer.

I was using Remington’s new R-25 GII or Generation II hunting AR, chambered in .308 Winchester. My scope? The VCOG. I had put it on the rifle the day before and got it sighted in at 100 and then 200 yards with less than a 20 round box of ammunition. The scope and rifle were right at MOA at 100 yards. At 200 yards, my shots fit into a small circle much smaller than a deer’s kill zone.

My stalk was harder than I expected, had me crawling upslope through thick brush and small trees, with scope and rifle getting banged about. I got into position and saw that the deer had moved off—of course!—but were still much closer than they had been when I was at the stand. Maybe 225 yards was my range guestimate.

And they were both shooters, I could see that now because they’d stepped out into the light. I got into a sitting shooting position, my elbows resting on my knees. I zoomed the VCOG up to 6 power, laid the crosshair on the deer’s lower shoulder and squeezed the trigger. The buck ran maybe 100 yards before folding up, the .308 round having punched through one lung, laid down and died.

The VGOC’s become my go-to hunting scope for the obvious reasons: good, sharp images; variable power settings to adjust to range and conditions; and a sturdy build for stalks and all-around travel. I don’t have to worry that a bump against a tree branch will knock off my zero.

The other reason is I don’t have to mess around with various rings and bases to fit the rifle I am using As long as the rifle has a Picatinny rail atop the receiver, the VCOG goes right on. Literally in less than a minute. 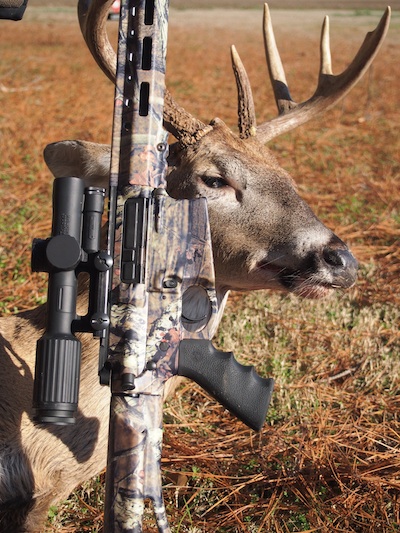 The VCOG and its forged aluminum body have been put through some strenuous mil-spec endurance testing. Trijicon won’t say much about that, beyond noting that the VCOG “exceeded” the various drop tests. In the past, that has included dropping a scoped rifle from one and two meters onto concrete, and not only functioning but holding zero.

The VCOG uses a single AA battery; the battery compartment is tucked right under the objective lens, and the battery is easily accessed by unscrewing a cap. With a good lithium model, Trijicon rates battery life as 700 hours at the 4-power illumination setting.

Problems? The crosshairs are just a bit thicker than I would prefer. For my hunting, I wouldn’t use the available horseshoe dot, which I have had a chance to test out, also. I know the horseshoe has a great reputation in combat, but I want to see what’s beyond the target (especially if there’s a group of hogs or deer ahead), and horseshoe reticles I’ve used somewhat blocked my field of view.

Some will find the VCOG too heavy. But it can take a beating on a tough hunt and come back for more, and toughness usually requires some heft.

Like most variable power, tactical optics on the market today, the VCOG is pricey. Too pricey? That’s a question each individual hunter will have to decide. But given the quality of the glass and the durability of the body, the VCOG represents an investment that will last for years and years. I would note, too, that VCOG’s street prices are approximately $500 below the suggested retail.

Weight, VCOG plus mounting base 27.2 ounces, 23.2 ounces without base