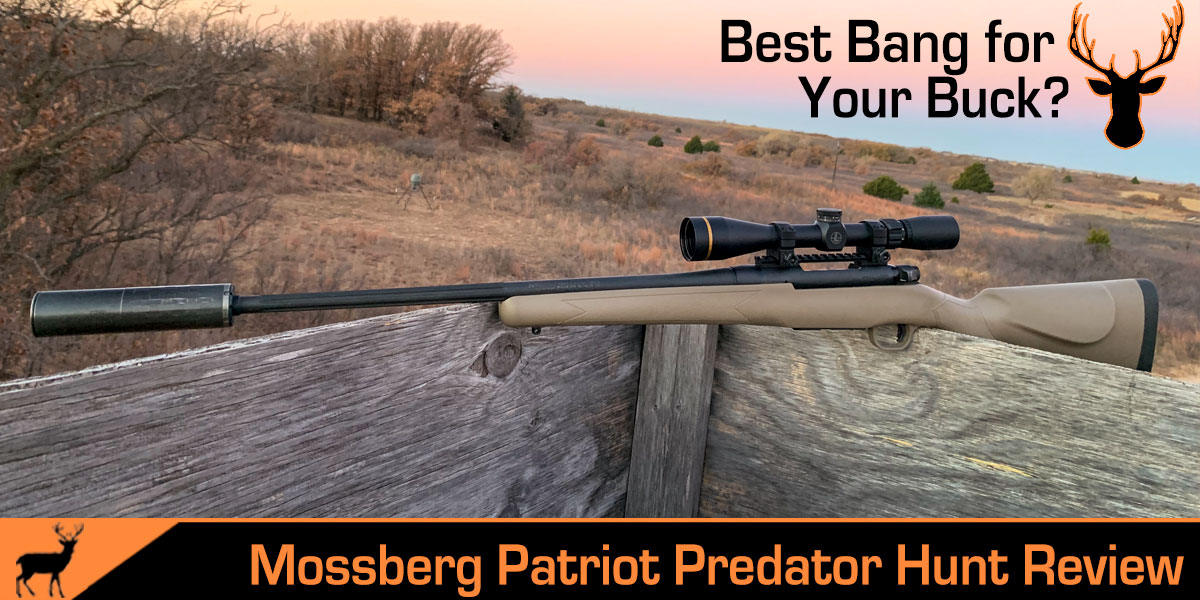 It’s the Friday before Thanksgiving and as I close my work laptop my anxiety begins to increase.  You see, Thanksgiving week means a week at deer camp; In the Texas Panhandle it just so happens to coincide perfectly with the rut.  Today, the laundry list of items that I need to take care of before hitting the road Sunday morning seems more daunting than usual. I immediately set out on accomplishing the first task: picking up a Mossberg Patriot Predator chambered in 6.5 Creedmoor from Armed in America in Bulverde, Texas.  Task number one goes as smoothly as expected and my initial impression is that the Mossberg rifle presents itself as though it should cost more than the $504 MSRP would indicate. I’ll get some solid experience with it before writing this Patriot Predator review.

Testing it will have to wait till Saturday though, the day UPS is scheduled to deliver my new scope.  The day ends up being a blur, packing and repacking all of my hunting bags with new Sitka gear and new Lacrosse boots. As a side note, I thoroughly de-scented my new gear with Dead Down Wind laundry detergent and spray.

This is followed by packing my other bags plus the wife’s and three kids. The youngest is an infant, It’s crazy.  Frustratingly, the UPS tracking number associated with the arrival of the scope is not showing out for delivery…  Sadly, I will have to wait to mount the Thrive HD 2.5-15x50mm that was meant to accompany me and the Mossberg on the hunt.

Reality settles in. I have lost the daylight needed to get the Patriot Predator sighted in.  I end up borrowing a Leupold 3-9x40mm I have on another rifle, mount it, pack it, and come to grips with the fact that I will have to sight it in once we arrive.

As I mount and level the scope, I take some time to familiarize myself with this new rifle. It is light and well balanced, weighing in at just 6.5 lbs.  Numerous “lightweight mountain rifles” fill the shelves in gun shops everywhere. They sport similar weights to the Patriot Predator, but they also come with a more expensive price tag.  You can get 6.5 Creedmoor rifles that are sub 6 pounds, but be prepared to pay 4-5 times the price of this Mossberg.

As I set the rifle up, several features stand out to me.  For starters, the barrel and bolt are fluted.  This contributes positively to the Patriot Predators weight, of course. It also helps disperse heat, and, maybe even more importantly, it just looks sweet.

The receiver has a top mounted picatinny rail, making scope mounting much easier in my opinion.  Plus, you can use any picatinny ring and not have to worry about what fits what. The polymer stock is colored in FDE (which is still cool), the barrel is free floated, and the rifle has a 4 round box magazine.  Bolt action rifles with box mags make life so much simpler for me.  When the hunt is over, I can remove the magazine from the firearm, rack the cartridge out of the chamber, place said cartridge back into the magazine and the magazine safely into my hunting bag.  Compare that to dealing with something like a floorplate where I must constantly wrangle loose rounds and am tempted to just keep it loaded.  And that is obviously a no-no.

I am shocked to find that this $500 Mossberg Patriot Predator trigger is adjustable!  It’s a crisp single-stage pull that can be set anywhere from 2-7 lbs.

Finally, the crème de la crème, the muzzle is threaded!  Honestly, I am now at a point where if a rifle is not threaded, then it’s a rifle I don’t want.

As the night winds down I thread on my Silencerco Omega. Something seems off here. Did Mossberg ship me the correct rifle?  I thought I had requested the Mossberg Predator Patriot in 6.5 Creedmoor. I know it’s priced at a mere MSRP of $504. For whatever reason, that bit of info and the expectations I had along with it stuck in my head. Granted, I hadn’t done a ton of research before ordering, but surely a rifle with that MSRP wouldn’t have an adjustable trigger, fluted barrel, spiraled bolt, threaded barrel, and weigh in at just 6.5 lbs… But, what do you know, it does!  “I wonder if it can shoot,” I think to myself as I turn in for the night. Sunday morning at 5am we start the 8 hour trek from San Antonio to the Texas Panhandle.  I need to get there early if I am going to have time to sight in and make the afternoon hunt.  Within 20 minutes of my arrival at the ranch I am setting up a target and preparing to zero.

Conditions are not ideal.  There is a 22 mph crosswind gusting to 30 mph. Which, in part due to my lack of staples, makes mounting the target much harder than necessary. Once everything is set up, I begin a very conservative zeroing process due to my lack of 6.5 Creedmoor ammunition.

One box of 129gr InterLock Hornady American Whitetail is all I have in my possession, so I can’t screw around if I’m not on paper.  Also, in the back of my head is something that I have read about this rifle preferring bullets about the 140gr range.

After settling the cross hairs, my ears are met with a suppressed bang as I finish a slow squeeze of the trigger. Ah, yes, virtually no recoil and a very pleasant sound, thanks to the Silencerco Omega.

I decide to send one more round down range and tackle my zeroing in groups of just two due to the limited number or rounds in my possession.  I’m about 8 inches low and 8 inches left. Luckily on the paper, though.  After completing some quick math, I make my adjustments and send two more rounds down range.  They land within an inch of each other, just slightly off the bullseye (the two shots on the lower right).

I am pleasantly pleased with this result, and a bit shocked, due to the extremely windy conditions.  After first thinking “that’s close enough,” I decide to adjust .5 MOA up and .5 MOA left, and send two additional rounds down range.  They end up touching in the dead center of the bullseye. This thing can flat out shoot!

I know some people will be annoyed that I didn’t fire three to five round groups but I didn’t have the ammo or the time.  You are just going to have to trust me on this.  It’s accurate, take a look at the picture, and don’t forget about the wind!

After my walk into the stand and climb up the ladder, I start to appreciate the weight of the rifle. Or should I say its lack of weight?  It just makes things easier. The afternoon turns to evening, then to night, then to morning, and day after day passes by as our hunting group keeps putting down great looking deer. The rut is really beginning to kick in and everywhere I sit buzzes with activity. But somehow the mature deer successfully avoid coming into my zone. The more hunting I do, the more important it is for me to harvest mature animals and let the young studs grow up to be bigger. So, I wait. And I wait some more…

Still scoreless late in the week, I sit in a blind we call the “Sandhill,” one I made myself. Color me puzzled. The feeder sits 75 yards down in front of me surrounded by brush. A huge wheat field lies just beyond that, but every deer that comes in snorts, stomps, spins, and then leaves in a hurry.

I know the wind is in my favor and I’m well hidden so it can’t be me. For good measure I check the wind again to confirm. All is well on that front. Then I see a covey of quail move into the feeder, a good sign. Predators and the drought the last few years have really done a number on their population. Then, boom! The quail explode out of there in a mad fury within seconds of arriving.

Finally, I know what is up so I grab the Mossberg Patriot Predator, carefully level it, and start scanning the brush around the feeder. Within seconds I see what I am looking for: the twitch of an ear behind a small sage bush. No doubt, it’s a bobcat ear.

As our quail population has diminished the last few years, we have seen an explosion of bobcats on the property.  Well, it’s time to re-balance the odds a bit. It is time for action and when the moment was right I confidently let that 6.5 Creedmoor loose at 2,820 feet per second. Somehow, it seems fitting that the first animal I take with the Mossberg Patriot Predator ends up being just that: a predator. As this season comes to an end, it’s bittersweet. For the first time in a decade I haven’t harvested a deer. I had dozens of chances but the right one just didn’t show himself this year. And that’s okay. It looks like this particular rifle will have to wait till next season for it’s first whitetail. You don’t have to, however, if you are looking for a lightweight and accurate rifle packed with features, you should check out this Mossberg. It turns out they can do more than just shotguns. I can’t be the only person just discovering their rifles. I’ve seen the Patriot Predator selling for $400, or even less. At twice the price, this would still be a great buy!