One hundred and fifty feet below my climbing boots, a gloved hand keyed a mic. My radio broke the stillness of the crisp fall air.

“Bear! Heading straight for you!”

The bear came up the cliff effortlessly, his nose swinging to catch my scent. Close now, he saw me on the rim and adjusted course toward me. My gun swung up from its position among harness, ropes and carabiners. If he pressed the attack, there was no time for switches, no time for dead batteries, no time for failed electronics. There was only time to snap the AR-15 into a firing position.

The orange bullseye reticle appeared in my line of sight, superimposed on the kill zone of the bear. I knew the reticle would be there. Every day, 24 hours a day without fail, since the day the sight was manufactured, the reticle had been glowing without stop.

My aggressive movement forward and snarled yell caused the bear to falter momentarily. He moved into a thick clump of brush and crawled toward my partner. I moved with him, staying 15 feet in front of him, weapon ready, hurling insults.

I never doubted my sight. It’s a tank. Its always there, always zeroed, always ready.

When it comes to bear defense, there are only two types of sights I really trust; robustly built aperture-style iron sights, and the Meprolight M21 reflex sight.

Why does the M21 give me confidence that no other red dot sights offer? The answer is in its roots and construction.

There are three companies who are really serious contenders for true military-grade reflex (red-dot) sights worldwide. One of the three is Meprolight. While reflex sights have been in use on aircraft since WWI, Meprolight invented the concept of a reflex sight for small arms. They have been making reflex rifle sights longer than any other company in the world. Meprolight also invented tritium night sights, and builds sighting systems for Merkava tanks.

The Mepro M21 embodies the IDF’s fighting philosophies. Keep it simple, keep it tough, keep it ready. In an environment where any soldier can find herself in a fight in any instant of any day or night, an M21 is always on point.

The number one criteria I have for a dangerous game sight is that it must be ready to use when the rifle comes up. I may not have time for switches. Switches and buttons are things that the Mepro M21 lacks. Totally. Once you mount and zero the sight, it never needs adjustment again.

No Lack of Power

Ever shoulder your rifle only to find your sight is dead? Not gonna happen with the M21. Batteries can’t fail when they are nonexistent. The M21 is illuminated by ambient light and tritium. In brighter light, the reticle is brighter, in low light, the reticle dims appropriately. In total darkness, the reticle is visible without obscuring the target, yet is still comparable with night vision. Meprolight uses the purest tritium available and a patented process for cutting and sealing tritium tubes in one step, resulting in the brightest tritium available in both their night sights and optical sights.

But what about modern sights that run for thousands of hours on a single battery? That’s great, if you want to trust your life to that mass-produced $2 battery. Batteries fail. They fail from manufacturing defects, from environmental effects, from altitude. When you need them most, they can fail. Two days prior to these photos, I watched from the mountain as a bear killed one of their two calves.

Most optics look tough, but are sensitive on the inside. Caress an adjustment knob, and you move them at the core

Not the M21. It’s heart might as well be stone. Nothing moves it.There are no moving internal parts. No delicate adjustments. no tiny springs, minuscule screws, no delicate parts.

Zero adjustments take place between the sight and the mount. This allows all adjustment parts to be many time larger and more robust than the internal parts in other optical sights. The M21 just doesn’t lose zero. You can vibrate it, you can batter it, heat it, freeze it, it holds its zero.

Thermal cycling kills optical sights. You can heat most quality sights to extremely high temperatures. Once. But heat them up to a fraction of that temperature over and over, and they begin to fall apart. Why? Glue holds them together. It makes manufacture inexpensive and fast, and it works well. Usually.

The M21 stands apart. It does not depend on glue to hold things together when the situation gets hot. The design of the M21 also insulates the body of the sight from the steel mount on the receiver of an AR-15.

So how does the M21 keep it all together through abuse and heat? The components are thread and screwed together. Since the simple failure of an adhesive doesn’t allow the sight to fall apart, it can take impacts and heat that other sights cannot. 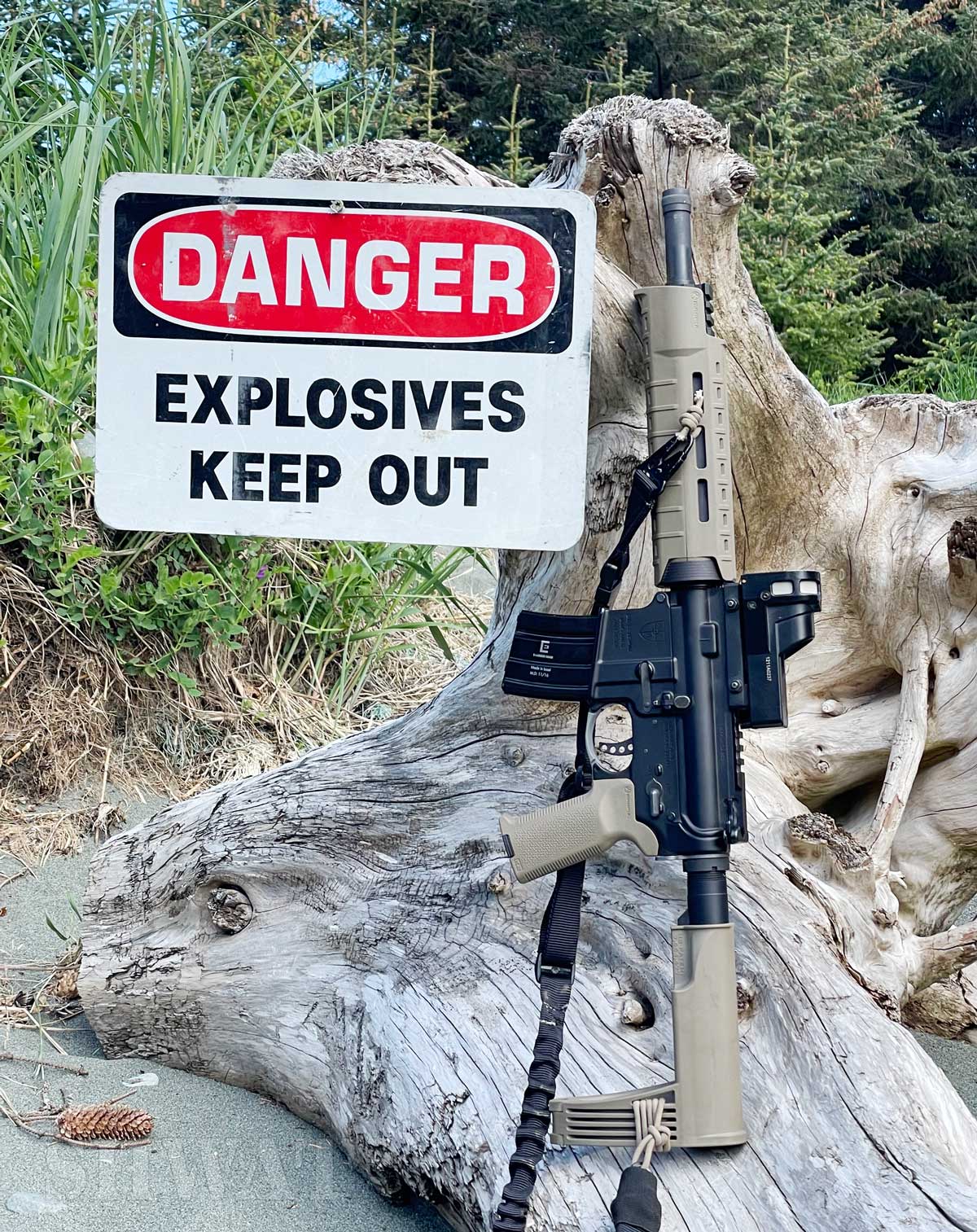 The quick-release mount allows the M21 to be quickly removed from a rifle and reinstalled, returning to zero. But for bear defense, I certainly don’t need to remove my sight. The mount is designed so that a quick tightening of two lock nuts renders the mount unremovable.

Heads Up and Eyes Open

The M21 Sight is a lower-third co-witness sight. Iron sights can be used through the M21, aligned just below the reticle for a clear sight picture. This is the preferred configuration for most serious users. The height is the sight is correct for ARs and similar firearms, aligning effortlessly with the eye for an instinctive sight alignment.

As with all good reflex sights, the reticle is on the same focal plane as the target, meaning that the focus is never taken off the target. When the rifle comes up, the reticle simply enters the line of sight and aligns on the target. There is no sighting system that is faster. You can’t hurt it with water. You wont hurt it with cold. It doesn’t care about the sun. How deeply can it be submerged? Only to such depths that the pressure of the water crushes the actual materials the M21 is made of. It isn’t a closed system so pressures are equal inside and out. there is no nitrogen to leak. In fact, the factory recommended cleaning method is to wash it under water.

When the balance between life and death is measured in milliseconds

The M21 is my go-to sight for self-defense or dangerous game. I have an AR15 in my bedroom for home defense. It wears an M21. Always illuminated, always ready.

Most of my family’s recreation is in wilderness areas. Most of my work is the same. We share the bush with bears continually. I carry firearms to keep my family, coworkers, and myself safe. My family does the same. Often when by myself or with my family, and almost always when my professional duties include being a bear guard, I carry an AR-15 for bear defense. When hunting bear, the same guns are a common choice.

The AR-15s I use for this purpose are Alexander Arms .50 Beowulf ARs. Shooting heavy solids at similar velocities to hot-loaded .45-70 cartridges, these light-recoiling, fast-handling guns are capable of shooting end-to-end through the largest bears.

The .50 Beowulf ARs are familiar and instinctive for me after many years of training with and using M4s. They can be carried at the ready with a tactical-style sling, while leaving both hands free for work or for fishing. Recoil is low for fast follow-up shots and easy use by smaller children. Length is short and handy. And their top rails are ideal places for the fast, instinctive Meprolight M21 reflex sights. The M21 is built like a tank. It is so reliable that many IDF units no longer issue backup sights for guns equipped with M21s. The rugged, simple Meprolight M21 just looks right on top of such a gun. A brute of a sight for a brute of a gun.

The simplicity of a sight that is always on is vital when split seconds may be all that separates life and death.

Remember the from the beginning of this story? It crawled toward me on its belly through the brush and gathered itself for the charge. At 15 feet I couldn’t miss. The huge animal recoiled in shock when the large rock struck its face. For 20 minutes, the bear stalked back and forth through the small clump of alders, trying to get in a position of advantage while we threw rocks at it. Finally, reluctantly, with several starts back toward us that were met with flying rocks, the bear moved up the mountain and out of sight.