Make a Statement Customizing Your Gear Like most shooters and hunters I suspect, I really get a kick out of little custom touches to gear accessories.  I am particularly fond of sweet tricks I can add to my own AR rifles, including my tactical hog hunting tools, setting them apart from everything else you see at gun shows or hunting camps.

I love to set my gear apart with items that bring attention to it, accessories that makes it uniquely mine.  This often opens the door to sell hunting and shooting as a positive recreational activity.  I guess this is why I really like the AR platform in optics ready (or flat top) versions, along with rail systems that allow maximum flexibility for accessorizing.

At the same time, I am also in constant search for AR products that really work, since that comprises a huge part of my writing work these days.  For about a year I have been field testing a large selection of AR products and accessories from Magpul.  After several booth visits at the annual SHOT Show in Vegas, I began to appreciate the quality and diversity of their product line – especially for AR goodies.

As you SHWAT™ tactical hog hunters already know, the AR accessory market is as crowded as the breakfast cereal aisle at the local grocery store.  It is just crazy, but at the same time, more is better.  But buyers beware – there is a lot of poor quality out there especially from some off-shore suppliers.  So, inspect anything you buy, look for useful recommendations posted here and other related web sites.

Perhaps one of the best known and most thoroughly tested items manufactured by Magpul is their exceptional polymer AR magazines in 20 and 30 round capacities in various colors commonly known as PMags.  I have several of these now in service for quite some time, always loaded, and have never experienced a problem.  Some of the mag springs have been compressed for over a year.  They work and keep working.

If you are searching for an AR magazine alternative to traditional aluminum or steel versions that dent, collapse, or the feeding lips crush together after minimal use, then buy one Magpul mag and try it.  They retail from $15-20 depending on where you find them in shops or on the web.

Given the untold numbers of PMags now in use, a quality custom PMag would be a welcome option to making my kit truly “mine.” I’m not the first person to think of this. Lot’s of people have painted or otherwise customized PMags, but with varying results. That said, Adam Breon worked to come up with what may be the best implementation of the custom PMag yet. What he does is apply thermal infused graphics on PMags, AR Grips and other AR components as well.  He adds custom images on polymers and plastic bases.

What he applies does not wear off, and does not affect the strength of the magazine.  I’ve included a cool video demonstrating a Magpul magazine with a Breon image on it being tossed for over an hour inside a concrete mixer. Inside the mixer with the magazine are rocks and sand.  Sure the mag came out dirty and dinged, but this durability test clearly shows two things:  The thermal image was not damaged, and neither was the functionality of the PMag.

ABreon Custom has an on-line store offering several of his more popular thermal images applied to Magpul mags.  Some the designs include the SHWAT™ logo, the American Flag, Don’t Tread on Me, Zombie Defense Force, Skull, the Grim Reaper, a Rebel Flag and several other designs.  The images come in either red or dark earth color.  As Adam says, “the dark earth color ‘pops” on the PMag.  He’s right, it does.

So, check out Adam’s PMags and order some to set you and your AR rig apart from the masses. Lastly, a shameless plug here – get some SHWAT™ style. Let’s all buy some of the SHWAT™ logo mags from ABreonCustom, and spread the tactical hog hunting lifestyle around. 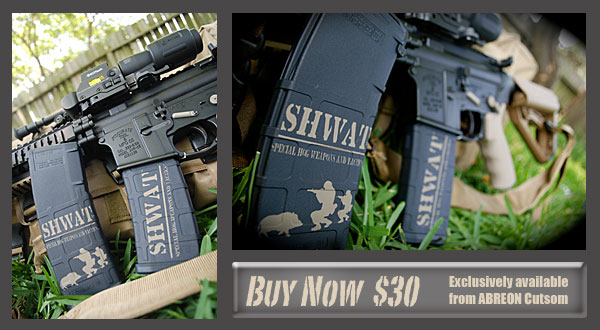