Know Your Prey: The Differences between Wild and Feral 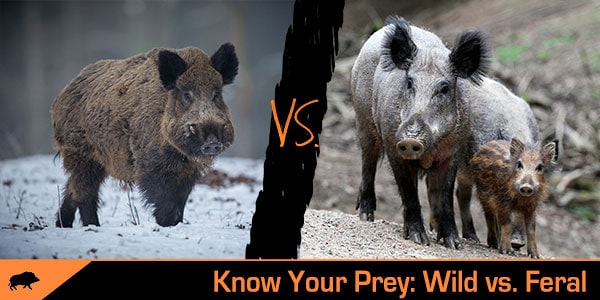 Wild hogs and feral pigs are among the hardiest game animals on the planet; capable of not only surviving, but thriving, in nearly every environment they find themselves in. However, even among hunters there are many misconceptions revolving around feral pigs and wild hogs. Many believe both broad types of pig are one in the same, when in reality these two terms are quite different and both encompass dozens of various hog and pig species.

Often times the terms feral pig, feral hog and wild hog are used interchangeably to refer to any hog roaming the wild. Feral pigs and wild hogs are similar and may even be indistinguishable in some cases, but they not one in the same. The key difference in defining a specific one is the use of the terms “feral” and “wild,” which have two distinct meanings.

The term “feral” applies to any animal that was once domesticated or whose ancestors were domesticated but has since been loosed into the wild and lost its sense of domestication. Feral pigs, often referred to ambiguously as “razorbacks” in many countries around the world regardless of the actual species of the pig, either were domestic pigs themselves or they are the descendants of domestic pigs. The longer a population of formerly domesticated pigs lives in the wild, the more it reverts to its original wild state. Yet feral pigs will only ever be able to become so wild because their genetic stock comes from centuries if not millennia of domestication and selective breeding on farms. Pigs of any variety are not native to North America and every hog roaming the United States is the descendant of domesticated pigs originally brought over by European explorers. In contrast to their feral cousins, truly wild hogs have only ever existed in the wild. Wild hogs collectively have never been subject to domestication by humans and have always remained as they were originally, wild. Populations of wild hogs are almost always native to the regions where they are found and have existed there for thousands of years. There are still vast populations of wild hogs across Europe that have existed there, unchanged, for as long as man has inhabited the continent. In general, wild hogs are not only physically larger and stronger than the feral variety but they are also more adept at survival and have a greater awareness of their surroundings.

Wild hog herds, properly referred to as “sounders,” are close-knit societies where hogs use a series of calls to communicate, the males actively protect the herd and the females adopt the young of another if the mother dies. Feral hogs display far less cooperation and have a much weaker herd mentality. The value wild hogs put on the herd as a whole is largely lost after generations of domestication. Additionally, feral pigs display much greater cannibalistic tendencies compared to wild hogs. Wild boar in the European Forest in Czech Republic

Usually when wild hog populations are brought by man to a region where they previously had not existed, they interbreed with domesticated hog populations along the way and they lose what makes them wild; for example, large populations of wild central European and Carpathian boars were brought in from Europe and purposefully set loose in North America. For a while, they lasted as functioning independent populations but over time they intermixed with the already present feral and domestic hogs until there were no wild hogs of any variety left.

The laws pertaining to feral pigs and wild hogs also vary greatly; for example, many states in the U.S. classify feral pigs as vermin, comparable to rats or roaches, and can be openly killed whenever and in any quantity; the only requirement to killing them is a simple hunting license. In some instances, with the use of automatic weapons and even tannerite explosives, the killing of feral pigs is more akin to extermination than hunting. The wild boar hunting industry in Europe is quite different. The various types of Eurasian wild pigs hunted in Europe are revered in a manner similar to how American hunters revere our various species of deer and the hunting of them has restrictions differing from country to country.

Certain countries set a specific season where hogs can be hunted and others leave hog hunting open year-round similar to most American States. Most countries require a hunting license pertaining to that specific country in order to hunt there but some, especially in Eastern Europe, do not require any sort of license and hogs can be hunted openly. Some countries put quotas and limits in place to maintain a certain population while others will culling periods where hunters are permitted to kill as many as possible until the population stabilizes. When it comes to hunting true wild hogs in Europe, hunters need to take the time to familiarize themselves with that country’s specific regulations and adhere to the local hunting culture. In much of America feral hogs are hunted at night using thermal optics.

A hog hunt can be changed significantly depending on whether you’re hunting feral hogs or wild hogs. Wild hogs generally have much denser muscles and thicker hides, meaning rounds won’t penetrate as deeply as they would when fired into a feral hog. Even after sustaining severe injuries to both muscle tissues and organs, the survivability of wild hogs is immense. Wild boars are noted for running for several dozen yards before finally succumbing to a perfectly placed heart shot. While it’s commonplace to hunt feral hogs with .223 rounds, wild hogs require something heftier. The larger European wild hogs are typically hunted with rounds akin to the .308 Winchester or larger.

Whether you’re hunting a North American feral Razorback or a wild Carpathian boar, both are extremely tough and potentially dangerous animals; however it’s important to know the differences between wild and feral to understand the implications of hunting either one, and to know the caliber you’ll need if you’re going after the larger, wilder variety of hogs.

About the Author: Outdoor writer, Mason Sellers, spent much of his childhood on rural Texas farms and ranches where hunting and shooting opportunities were constant. He quickly developed an affinity for hunting feral pigs in Texas, then took his experience across the pond in pursuit of true wild hogs in Eastern Europe. He interns during summer months at Sellmark Corporation, continues to work on a business degree at Austin College and looks forward to continuing work in the outdoor industry.