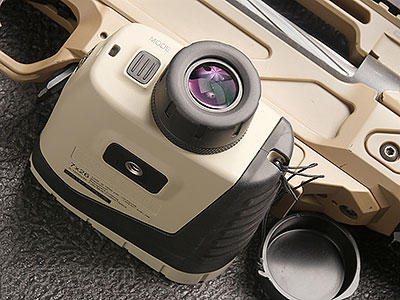 Famous words uttered by more than one hunter blaming circumstance for a miss. Or a missed opportunity, for that matter. I’m not the only one guilty of having uttered that phrase when I should have said, “I blew it” or “I wasn’t prepared for that.” All kinds of scenarios come to mind here – the animal moved, the wind changed, a stick broke underfoot that caused the prey to bolt unexpectedly. Maybe you’ve confidently squeezed the trigger, over- or under- shooting your target because you didn’t correctly determine the range. In my case, not knowing the range was cause for a severe beating of my head against the red Dodge truck’s door.

To date, it was the biggest hog I’ve ever personally seen. Before SHWAT™ was even a thought, my hunting partner and I were probably 30 miles from the world famous Spike Box Ranch. We’d seen the beast on a couple of occasions over a few different hunting trips. The first time we saw it, we thought it was cow. The light was low and distance unknown.

This time, this hunt, this evening, the beast appeared alone, as always, feeding on the tall, still green wheat. With the low light fading and no night vision, we spotted its giant gray mass somewhat downhill from the road.

I had my .223/5.56 Accurate Armory AR-15 with a Trijicon ACOG ECOS mounted. My buddy had his grandfather’s .30-06 with a nondescript scope on it. I’d already killed plenty of hogs with my set up. Same for my buddy. Truthfully, I wasn’t about to shoot the giant pig with my gun at that distance. What distance? I couldn’t say.

So we stood there, guns in hand, guessing at the distance, debating whether I’d try his Grandfather’s Remington 700 or if we should try closing the distance a bit. A college athlete, he was a lot better at estimating yardage than I, but with the light fading and a lack of experience we concluded we’d opt for closing in on foot.

After a long walk of what we now know to be more than 400 yards, we discovered the giant wild hog had vanished. Seriously bummed, we walked back to the truck.

Some of you are seasoned hunters who can judge wind and distance with nothing short of Jedi Knight intuition and accuracy. I’m better than I once was, but I’m not that good. If only I’d had decent range finder that night…

I do now: The Bushnell Elite 1 Mile ARC. Okay, I’m probably never going to shoot at a hog a mile off, but historically the best specifications seem to work under only the rarest of perfect circumstances. For example, I once had a Bluetooth headset that wouldn’t work more than 10 feet from my cell phone. Should have been 30. Last year at Tac Pro Shooting Center, I shot 1000 yards, breaking clay pigeons under Bill Davison’s coaching in my precision rifle class. So I figure if I’m interested in shooting 1500 yards, I should get rangefinder claiming even more. The one mile claimed by Bushnell equates to 1760 yards.

The first thing I noticed about the Elite 1 Mile ARC was the long name. The second thing was the size. It’s still pocketable, as long as you have a jacket pocket available or generous cargo pants pockets. But big size delivers big features. Features like a large 26mm objective that’s super easy to look through with a very nice field of view. The 7x magnification through multicoated optics is pretty sweet, too.

There are only two buttons on the Elite 1 Mile Arc: Mode and Power. The latter is the large button on top that both powers up the unit and initiates the laser range finding. Tap the button to turn on, then place the illuminated circle over your intended point of measurement and hold the button. The information you get back will include range in your preference of yards or meters and the angle in degrees up or down. Here’s where it gets exciting.

The “ARC” part of the name translates to Angle Range Compensation. Shooting at significant up or down angles alters range to target calculations. The Bushnell Elite 1 Mile ARC rangefinder simultaneously measures the angle of your shot while measuring the range to target. Different ARC modes will give you different information in the display:

Rifle Mode – This mode incorporates data from your load’s caliber and ammunition and works from 100-800 yards. Pretty crazy. Instead of using a ballistic calculator like iStrelock or others, your Bushnell ARC rangefinder does the math instantly while range finding. It tells you bullet drop in your preference MOA, MIL, centimeters or inches. It knows your load data based on a table.

The table groups something like 2000 loads into eight groups and bases its calculations on the group. It should be pretty close, but would you believe it lacks my currently on hand Remington 300 Win Mag 180 grain load? I can envision a future product that allows you to input data from a manufacturer or your own tested results for a given load via a Bluetooth app on your phone or USB computer interface. In the real world, animals are often found in more complex terrain that can fool some laser range finders. The Elite 1 Mile ARC has three Selective Targeting Modes to optimize its results:

Standard Mode – It scans targets just like you’d expect. See a deer standing alone in the middle of a clear field reading American Hunter while sunning itself on a cool fall day? This is your mode.

BullsEye Mode – If your target is coyote with a hillside some unknown distance behind it, this is your mode. It’s designed to isolate and read the nearest object when a further object could have a stronger reflective property.

Brush Mode – Let’s say you’re targeting a giant wild hog that has some brush or a tree limb in close proximity between it and you. This is your mode. It is designed to measure the farthest object. Range Mr. Pig confidently, then give him the dirt nap. The truth is that it’s real hard to measure performance across the board. Different targets reflect the range finding beam differently. The slighter the angle of the hillside you’re targeting, the harder it will be to get a reading back. Atmospheric conditions can play a role.

Here’s what I’ve found: In light rain at the Spike Box Ranch, I could get readings out to 1550 yards when ranging brush covered hillsides. In freezing rain and snow, I measured and then confirmed by driving a highway sign’s distance of 1624 yards. Measured against another rangefinder I have on hand, both were within a yard of each other at distances between 100 and 320 yards.

All this functionality doesn’t come super cheap. I found this online for between four and five hundred dollars. The limited lifetime warranty gives me some confidence in the long-term value of that kind of investment.

Not knowing your target’s distance can cost you. Not just in a miss, but in a memory, bragging rights and more. I’ve come to really appreciate the challenge of long range shooting and hog eradication. To the uninitiated, shooting feral hogs at 500 yards or more might seem unscrupulous, or even unethical. In reality, it’s completely reasonable with the right gear, the right skills and sufficient practice. No matter how good your rifle, optic and loads, you have to know the range. I’ve not found a more versatile, more robust unit than the Bushnell Elite 1 Mile ARC. It now goes wherever I hunt.