Precision. Boldness. Two distinguishing characteristics of the Swiss K31 bolt action rifle. Having spent time as a sniper and a cavalryman, I appreciate both. The two are entwined in one of my favorite stories. Before beginning this K31 review, let’s talk about the Swiss spirit behind its design.

The Swiss Shooting Prowess and Pride

Long before WWI erupted from the barrel of an assassin’s pistol, when European nations scrabbled over the last overlooked scraps of distant continents, certain heads of state cast their imperial glances toward their neighbors. In particular, the German Kaiser paid a visit to Switzerland.

Cognizant of the Kaiser’s covetous inclinations, The Swiss felt it behooved them to offer a display of military prowess in honor of his visit. During an impressive display of rifle marksmanship, the Kaiser strolled up to an elderly reservist who had just fired.

“This is all very well, boasted the Kaiser, “but what will you do with your five-hundred thousand troops when I invade with a million Prussians?”

“Then, Sir,” the reservist responded calmly, “We will each shoot two bullets.”

Since the day two halves of an apple tumbled from the head of a lad in Altdorf, marksmanship has been revered in Swiss culture; synonymous with freedom and independence. To this day, shooting remains one of the most popular sports in Switzerland, and at least one military rifle and a man skilled in its use are to be found in most Swiss homes.

Origins of the K31 Rifle

Several centuries after the seeds of liberty fell from that apple, they took root again across the Atlantic, and a new nation of riflemen was born.

Never one to give up on audacious ideas, the Swiss army was among the first to adopt a bolt-action rifle, borrowing the magazine and carrier system from the American Winchester Centennial rifle of 1876.

By the time the US military sought to replace its initial entry into bolt-action rifle cartridges, the Swiss had improved their own rifles and cartridges. Impressed by its superiority over most competing military cartridges, American ballisticians investigated the Swiss 7.5 mm cartridge. They took it as their inspiration in developing the famous .30-06.

The rimless 7.5 mm Swiss cartridge was far ahead of its time. First tested in the early 1880s, the GP90 was a modern-looking, barely tapered bottle-necked cartridge originally shooting a round-nosed 210-grain bullet. Slightly longer than a .308 Winchester, the 7.5 Swiss had a sharper shoulder angle, such as seen on Ackley Improved Cartridges, but long before Ackley was improving cartridges.

In Switzerland, the redesigned GP1890/03 cartridge birthed in the GP11. The GP11 fired a 174-grain boat-tailed bullet at 2640 fps, and latter rifles were designed to accommodate it.

First Use of the Karabiner 31

When the US entered WWI, the American troops arriving in Europe initially used foreign machine guns. Upon the arrival of their US machine guns (which fired the lighter 150 gr. .30-06 rounds), their reduced range proved disappointing.

Following the end of hostilities, the US Ordnance Department again investigated the Swiss cartridge, this time the GP11. They immediately requested an upgrade for the .30-06 to a 174-grain boat-tailed bullet. Thus the M1 cartridge was born.

The creation of the GP11 cartridge required a stronger rifle than the 1889 Schmidt-Rubin. Thus, the G11 rifle entered service, along with the K11 carbine. The excellent ballistics of the GP11 cartridge proved the shorter barrel of the K11 able to take advantage of the cartridge’s potential. The Swiss began the development of a short rifle, an improvement of the 1911 design, to replace both the G11 and K11. The result, adopted in 1931, was the Karabiner 31.

The K31 has a straight-pull action shortened from the G11/K11. The K31 retains the 43.6” overall length of the K11, but by shortening the action, the barrel length increased from 23.3” to 25.65”. This also moved the 6 round detachable magazine back, directly in front of the trigger guard.

The weight of the K31 is identical to the K11, but the superb balance makes it feel lighter than its 8.85 lbs. The finer details of the K31 are what make it truly unique. Is it an early 20th-century standard service rifle? Is it an accurized match rifle? The answer is, “Yes.” In the K31 however, the distinctions get a little blurred.

Three things stand out at first glance; a T-shaped bolt handle, a ring at the back of the action, and an oddly-shaped trigger. But a closer look reveals a rifle that is as audaciously non-conventional as it is classic.

The action is a straight-pull bolt action. While the bolt rotates, the handle does not. You simply pull straight back on the bolt handle, then push it straight forward. A cam rotates the bolt to disengage and engage the lugs (similar to an AR-15). This method of operation is smooth and lighting fast – almost as fast as a lever-action. Top view of K31 action. These rifles were meticulously cared for by Swiss soldiers and armorers. Grease was used for both cleaning and lubrication, and none that I have seen show rust or pitting.

The detachable magazine features a serial-number identical to the rifle. While the designers didn’t intend for the separate carry of the mag, spares are available. The bottom of the action has a unique profile and interface with the stock, and anyone who does stock work should be familiar with its peculiarities.

The two-stage trigger is a match trigger, usually falling between 2.5 and 3 lbs.; very crisp and clean. This trigger is so good, in fact, that it disqualifies the rifle from certain military rifle shooting matches in the US.

Moving forward from the receiver, the 25.65” barrel has a somewhat heavy, non-stepped profile and a match-grade bore culminating in a target crown. Every K31 I have examined has had a perfect, mirror-like bore. The Swiss were meticulous in caring for their bores.

The front sight is a blade sight, diagonally drifted for windage, and usually staked with a witness mark for zero. Its rear sight is a U-notched tangent sight graduated from 100 to 1500 meters.

The large ring protruding from the back of the bolt is the rear of the firing pin and the safety mechanism. Pulling the ring and rotating it 90 degrees places the rifle on safe. After ejecting the last round, the follower holds the bolt open, notifying the shooter that the rifle is empty. Remove the bolt by pressing a lever on the right side of the action.

The stocks are walnut or beech. Early stocks were walnut, but as WWII reduced the availability of stock-grade walnut, some stocks were made of shorter pieces of walnut spliced together, and then a switch was made to beech. I have examples of both and like both equally. The stock reaches 2 1/2” from the muzzle, and the handguard terminates at the same point. The hinged front band contains a bayonet lug and stacking bar.

The rear barrel band has a sling loop on the left side. A sling bar inletted on the left side of the stock completes the arrangement. This is my favorite sling configuration. It allows the rifle to be carried muzzle down behind the left shoulder, African-style. Bringing the left hand forward with a quarter twist puts the rifle on the shoulder ready for instant action.

Oh, and did I mention accuracy? From conception, the K31 designers envisioned it as a match rifle. Military surplus GP11 ammo is match ammo. These rifles are scary accurate. I have shot a group under 1/2 MOA with iron sights, a feat I’ve not been able to repeat. But mounting a scope shows that it isn’t the rifle that’s lacking. With glass, I can shoot 1/2 MOA effortlessly with several rifles.

The K31, for all its classic looks, is a rifle like no other. Audacity and accuracy combined create the most unique bolt-action service rifle of the 20th century.

But here’s where things get even cooler; customization.

I generally don’t like customization of historic firearms. The sporterization of a historic Mauser is generally a process of doing $300 worth of work on a $600 rifle to produce a gun worth $250. Think about the crime of drilling scope mount holes through a historic crest, heating and bending a serial-numbered bolt handle, then cutting a notch for it in an irreplaceable military stock. It is the destruction of history and art.

The K31 is unique in this area. Want to install a diopter sight set? Would you rather have a scope? What about a bipod and muzzle brake? A longer length of pull, the recoil pad of your choice? Any one of these things is destructive to a Mauser, Lee-Enfield, or Garand.

But if you have a K31, go for it. You can do all of these without permanent modification to the rifle, thanks to Swiss Products, located in Montana. Swiss Products pioneered and designed outstanding accessories that allow shooters to take full advantage of the accuracy potential of these rifles. I have and use three of their excellent scope mounts. These mounts clamp into the receiver without requiring modification or causing damage. They are rock-solid and repeatable. Swiss Products is also home to some of the foremost experts on these rifles, information about shooting, reloading, caring for, and accurizing these rifles. 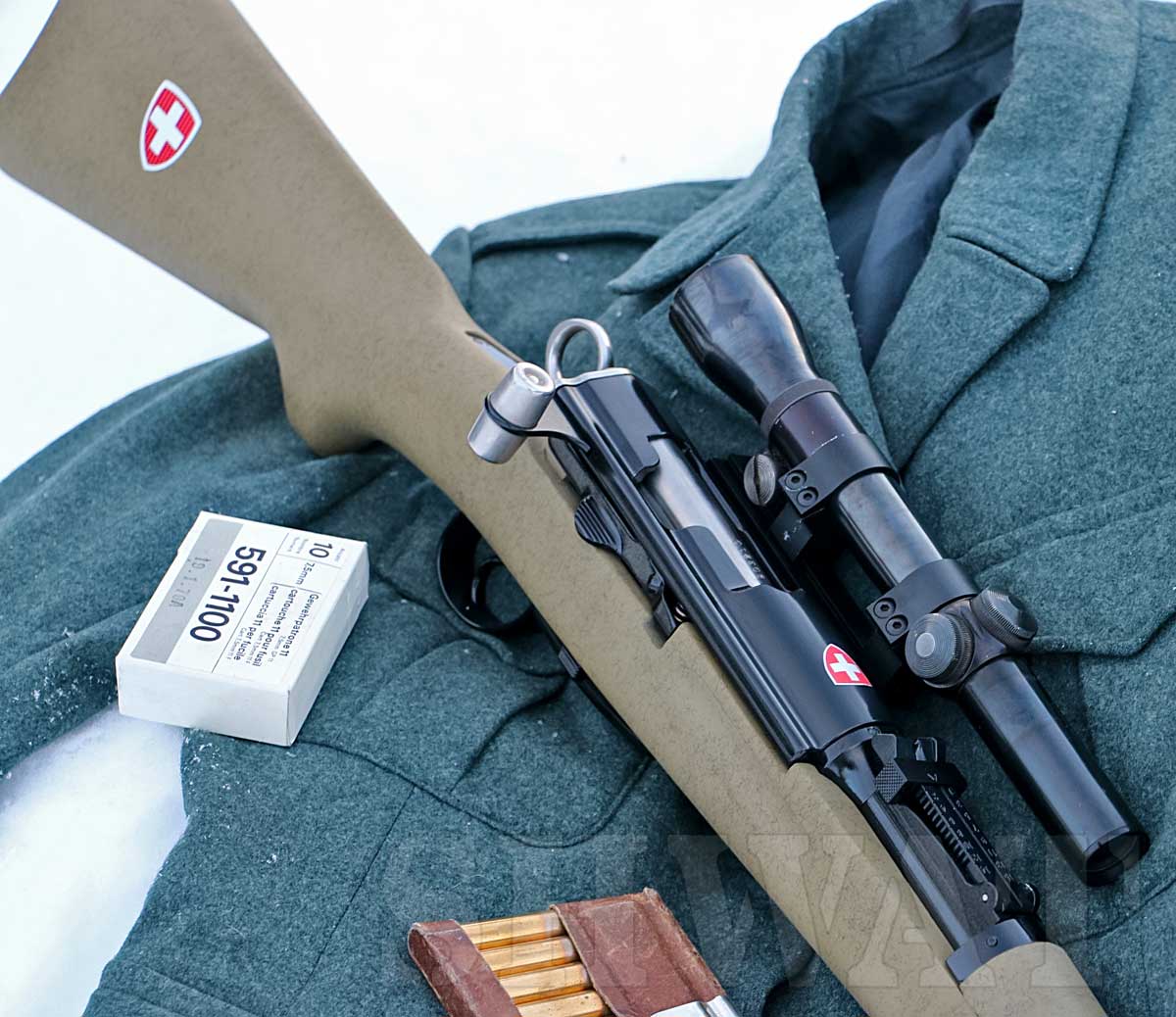 This K31 was bought as a parts gun with a shattered stock. A replacement stock was ordered, but arrived in badly damaged condition. This stock received extensive repairs, a Swiss Products Drill and Tap mount was added to the rifle, and the entire rifle was given a custom DuraCoat finish but 7.62 Precision

What about ammo? Can you even find 7.5x55mm ammo in US shops? Here in Alaska, I can find it in several stores locally. Shipping ammo to Alaska is tricky, limiting online ordering options. However, if you live in the Lower 48 states a number of suppliers will happily drop-ship that ammo to your door.

My favorite hunting ammunition is the outstanding 180gr Norma Oryx load. Wide expansion combined with deep penetration and over 90% weight retention makes it my first choice for most hunting.

The Swiss Spirit Lives on

When I first saw photos of the K31, I was interested. When I first held one, I was hooked. When I shot it, I was sold. This rifle is different. It looks different, it works different, it’s designed for troops that are, above all, trained marksmen. The action is complex to manufacture, simple to operate, and slicker than deer guts on a doorknob. Swiss rifles are different. Swiss military philosophy was different. Even their cleaning techniques were different. The Swiss would use grease to clean, lube, and protect. That may seem weird, but I’ve yet to see a Swiss rifle with signs of rust, or with anything other than a perfect bore.

Some dismiss the K31 as an unproven rifle, due to Swiss neutrality, but only a strong military can protect neutrality, and the certainty of facing mountain strongholds protected by rifles capable of sniper-grade accuracy in the hands of highly trained marksmen halted Hitler’s plans for an invasion more than once.