When you started getting interested in guns, what was it that grabbed you? I was a kid and the idea of how they worked, their actions, their histories, their looks all appealed to me. Not to mention that pulling triggers was and remains a good time. Dad had a subscription to the NRA’s American Hunter, though we never were able to hunt. I had no concept of pricing, what was and wasn’t a lot of money. Today I appreciate the value of the dollar. You can literally buy a dozen rifles for $10,000 or just the one I shot today, the XM-3 from the Remington Custom Shop.

I’m writing from just outside Little Rock, Arkansas. Remington invited me and some others to their ammo plant and range for a little show and tell. As it happens, some of it is more like, “Show and don’t tell.” They have some guns in the works that we got to play with but cannot talk about yet. 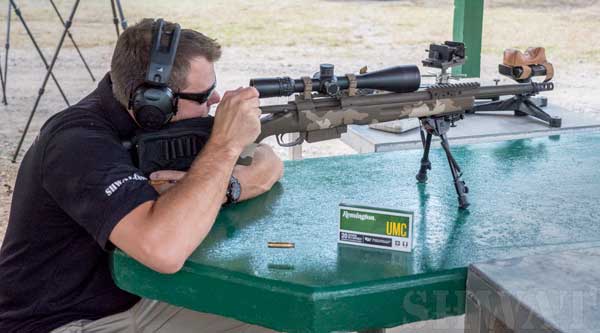 The XM-3, isn’t something you’ll find readily. It’s a Remington Custom Shop gun. Fewer than sixty originals were made, and fifty-five of those went to the Marines. It’s not the lightest weight gun, but is sweet to shoot and accurate. The heart is a Remington 700 action and the foundation is a McMillan fiberglass stock. Mere words cannot convey how nicely this gun shoots, how the details add up. If you have $10k and want to add something historic and unique to your collection, jump on this one.

I spent a bit of time on various Bushmaster ACR iterations as well. It’s a platform I have and love. I’ve taken the 5.56 SBR hog hunting. Yes, it’s heavier than it could be but I really appreciate the design and how it runs. I shot four ACRs this week that I’d never shot before. The first was chambered in 450 Bushmaster and had a muzzle brake. This is a big round, the biggest you’ll see for the ACR. It has enough energy that you need to upgrade an older ACR’s charging handle/actuator to hold up to the punishment. Everything you need ships with the conversion kit. For the record, the gun kicks hard even with the brake. Some of you will love that. Naturally, I’d want to suppress it, but that will have to wait. 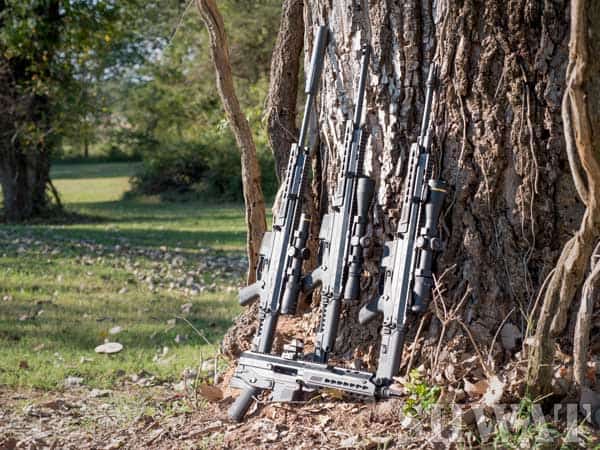 I also shot a 6.8 SPC ACR. It shoots like you’d expect, strong and reliable. Several people commented that it seemed particularly accurate. I didn’t shoot for groups, but I had fun hitting water bottles and cleaning the Texas Star target with it. Lot’s of hog hunters will appreciate 6.8 and 450 Bushmaster calibers. It’s great to see the ACR is starting to grow into its long awaited modular system.

Next up, the ACR pistol in 5.56 was a ton of fun! In fact, someone said it was, “More fun that it should be!” That begs the question, how much fun should it be, right? At first glance, my thought was, “Really? Why?” A big part of me could care less, guns are fun so who needs a why? There’s no pistol brace at this time, so while I love the platform I couldn’t figure out what the point of this Luepold Delta Point equipped gun was. But then from a bipod on a bench I shot it, destroying water bottles and cleaning off the Texas Star spinning target. Oh man, yes! It was more fun than it should be! Practically speaking, if you wanted something compact to throw in a backpack, this would be great.

And then there was another ACR. All I can say is while it may look like some of its brethren, it’s different. It’s probably my favorite of all of them. And in a few months hopefully I can come back and tell you more about it, but for now that’s all I can say. Horrible tease, I know, but subscribe to the newsletter and we’ll let you know when we can release more info. Much to my surprise Remington introduced their new semi-automatic TAC-13 shotgun-like firearm. This is the faster shooting lighter recoiling V3 shotgun-based version of my much loved TAC-14 (based on the Remington 870 Shotgun). These are not NFA restricted, and beyond being a ton of fun are actually useful. I recently hunted dove with the TAC-14. And with the TAC-13 shooting Crazy Quail clays, I managed to break 4 in a row before there were no more in the sky. I’ve never shot Crazy Quail so I felt like I’d accomplished something great. If you’ve never not Crazy Quail before, just imagine randomly launch clay pigeons a half dozen at time from various directions. It’s a crazy amount of fun, made more so while shooting the diminutive 12 gauge. Speaking of V3 shotguns, Remington has trimmed the semi-auto to a “compact” configuration. Why? Youth shooting sports are growing and it’s a great way to secure life long customers. It has a shorter length of pull and a 22” barrel. Honestly, I’ve always felt that the typical shotgun was a bit big. For reference, I like to shoot an AR with the stock expanded only to the first detent. I like my guns compact. The compact V3 felt absolutely great when shooting the Crazy Quail. I was just as accurate with it, and maybe more so, than the full size.

In other news, I’m thinking a tactical lever action Marlin might be here in the future. They certainly gave our great grandfathers a tactical advantage. Dressed in black and with a yet-to-be-announced AAC silencer attached it was a blast to run!

Even as I type this I realize I’ve said the same thing over and over – this or that gun is lots of fun! Like you, I enjoy pulling triggers, I like trying new things. We have a lot to look forward to trying and buying in the coming months. Stay tuned for more!