You know the often used movie scene where the shooter mounts a silencer to a rifle, aims, then gets a too-good-to-be-true muffled pop as the gun fires while the bullet miraculously flies 500 yards or so taking down the target? You may know that the 300 Blackout can get close to Hollywood quiet, especially in a bolt action rifle with subsonic ammo. But what about a subsonic .308? When I brought up the idea, some people scoffed, but not Paul Hendrixson, cofounder of Maker Bullets. It turns out that Texas Parks and Wildlife had recently contacted him with the same idea.

It wasn’t long and a box of Maker’s 180 grain Rex 308 Subsonic ammo showed up. With my long time hunting partner and friend Jared, I headed to my favorite Texas hog hunting haven to see how this hog sniping might work. Could we take down hogs one at a time without disturbing the big groups we typically engage?

Having the right gear for the hunt was clearly paramount. We each brought a Remington 700; mine a run of the mill SPS model with a threaded barrel, but upgraded with the excellent two stage Calvin Elite Timney Trigger. I really like everything about the Rugged Suppressors Surge 762 silencer so I mounted it for this hunt. We’d be hunting at night so I borrowed a Pulsar Core FXQ38 thermal clip-on and mounted it to a Nightforce NXS 3.5-15x scope. I ran the scope around 5x magnification. My plain 700 SPS doesn’t have a picatinny rail on the stock, so when it came time to shoot, I just balanced it on my ZRODELTA DCLW tripod. Using this kit, I had zero missed shots on the hunt. I like that. 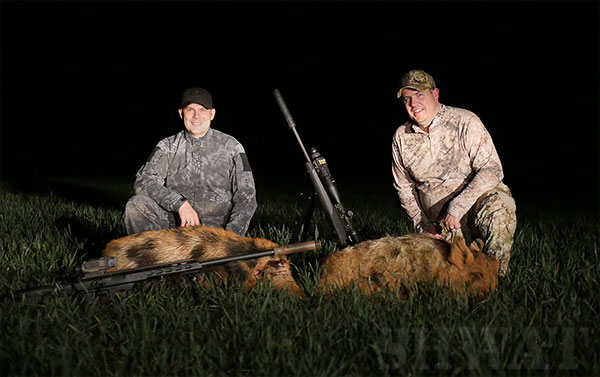 Jared brought a Remington 700 Tactical Chassis Rifle with a SilencerCo Omega to keep it quiet and a several year old ATN Thor thermal optic. He sometimes used one of my camera tripods for support and he never missed on this hunt. If that sounds like fun to you, we’re on the same page!

Picture this – It’s after dark, either side of midnight in late Spring. We’re hunting large familiar wheat fields, scanning for hogs with a Pulsar Quantum Lite XQ30V thermal monocular and EOTech X640 thermal monocular. This is a great method for night hunting hogs, but that’s another story for another day.

Out in some large fields we spotted big pigs loitering alone or in pairs. Aiming at their necks, we pulled triggers simultaneously. The 180 grain subsonic .308 Maker Bullets dropped most of the hogs where they stood. A few wild pigs took the hits and ran. None that we recovered made it further than 75 yards. A couple made it across a property line into thick woods where we couldn’t pursue them. All in all, fun – and effective – sniping from 100-125 yards on loner hogs or pairs. Check that box. Another question we wanted to answer was how groups of hogs would respond to our quiet sniping approach. Often we’re able to use the wind to our advantage, but we had very little wind on this hunt to carry the sound of suppressed gunfire away from the hogs. Still, at 300 yards or so one group remained oblivious to us as we killed a pig south of them. At 100 yards without wind to mask our shots, the hogs took off upon hearing the shots. Perhaps they lacked some of the squealing and urgency we’ve observed when shooting unsuppressed supersonic rounds.

The final tally for the night: 10 shots at 7 hogs, no misses. First hog took 2 rounds, one from each of us and was just dead right there. I dropped one with a shot just placed behind the skull. The recovered hogs sometimes had exit wounds.

If you search the internet for subsonic hunting you’ll find a metric ton of people saying it cannot be done effectively, that anyone who says otherwise is lying. I get it. My first attempt at hog hunting with 300 Blackout subsonics didn’t impress the hogs or me. But I kept looking for good methods, good ammo, good results. And I found them. In this case, I wanted to try the .308 route because I imagine lots more people have .308 bolt guns than 300 Blackout. I’m not able to confirm it, but I suspect that’s the same reason Texas Parks and Wildlife inquired with Maker Bullets about subsonic .308 ammo.

Unquestionably, the Maker Bullets subs are in a different league. In fact, it was the pursuit of subsonics that motivated Paul Hendrixson to jump into the bullet business. “Since I really like shooting and wanted my kids to enjoy it as well, I got a 300 Blackout barrel and then discovered ammo was impossible to find. I also learned that I could get a suppressor for the 300 Blackout. What I hadn’t realized was that it took eight months for the paperwork to clear the ATF, so I got my 07/02 FFL within 3 months, built my own suppressor and started making my own copper solids to plink with. My kids loved shooting suppressed, so I started experimenting with fragmenting and expanding rounds. As an engineer, I love trying to figure out how to make the bullets perform in different ways.”

It wasn’t long until Maker Bullets was selling its unique projectiles to ammo manufactures. Today you can buy some of their 460 different rifle, pistol, shotgun and muzzle loader projectiles directly from MakerBullets.com. They make solid, expanding and fracturing rounds, all CNC machined, one at a time from solid copper. Bullet design is application based. In this case, our application was the same as what the Texas Parks and Wildlife had inquired about; the load was good to go before we even called. The 180 grain .308 Rex round was designed to be stable in a 1:10 twist and give expansion down below 750 feet per second. Chasing hogs in West Texas, the Rex subs worked quite well at 125 yards and less.

It is true that you give up a lot to go subsonic. A Federal Premium 180 grain 308 WIN. Nosler® Partition® has almost three times the muzzle velocity as the Rex 180 grain subsonic, and almost six times the energy at 100 yards. I don’t know if perfect shot placement with the subsonic round would cartwheel a running hog like we filmed a few years ago. But with decent shot placement, the Maker Bullets subsonic 308 rounds were fantastic! 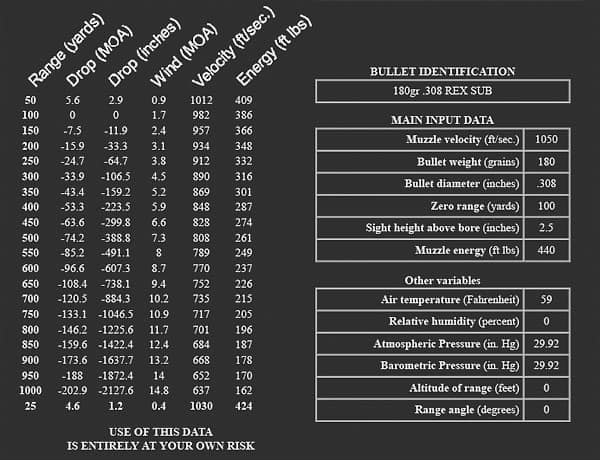 So, what about suppressed .308 subsonic hog hunting? No hearing protection means comfort, communication and a simplified hunting kit to run around with all night. And, yes, hogs died in the making of this report, and they did so consistently. If you have a .308 bolt action and a suppressor to go with it, you need to give suppressed .308 hog or predator hunting using Maker Bullets a shot! Share your results of .308 hunting in the comments below, no login required!