Dual Tube vs. Sing Tube Night Vision? Which NVG Should You Bet? Heading west out of Dallas, Texas, running late and chasing the setting sun, I began to think about my objectives for the upcoming hunt.  The first was obvious: Put down as many feral hogs as possible. The second, was to evaluate dual tube night vision versus single tube night vision and determine which NVG was best (at least for my hunting applications).  48 hours and 77 hogs later, I have my answers.

To make this test as fair as possible, I made sure the equipment was on a level playing field, apples to apples. Taking out the variables allows me to look at the merits of single and dual tube night vision and nothing else.

For my dual tube setup, I chose the FLIR BNVD-51’s in white phosphor. If you haven’t read my review of them, circle back to get a deeper understanding. They aren’t cheap, so due diligence is in your best interest. For the single tube I went with the FLIR MNVD-51 (Multi-Purpose Night Vision Monocular) in white phosphor.

When you compare the two optics you get the same manufacturer, same image quality, and the same field of view. I went back and forth between both setups constantly throughout the hunt to ensure lighting conditions were identical. I even used the same helmets, Team Wendy helmets for both, and used Wilcox mounting hardware to attach everything.  By doing it this way I hoped to eliminate as many of the “yeah buts” as possible and make the test really about single versus double tubes.

Let’s start by taking a look at the weight of the units.  Depending on your age, physical fitness, and injury history, this could be an item that is easily overlooked.

Something else to consider, the BNVDs will take a heavier counterweight to balance, so depending on your setup the difference will most likely be more than 10.8 ounces. I notice neck fatigue significantly earlier with the BNVD setup.  It’s nowhere near enough to deter me from choosing dual tubes, but I am 31 years old and in pretty decent shape. So, if neck injuries, age or other issues factor into how much weight you want to wear on your head, it is definitely an item to consider carefully. For me, it’s a non-issue.

Let’s face it, it seems God put two eyes in our heads instead of a cyclops single for a reason. Or reasons. Most things are easier to do with both eyes working together. Most people will recommend a dual tube setup over a monocular and the number one reason I hear for this choice is depth perception.  Unfortunately, that is very misleading.

You don’t completely lose depth perception using a monocular NVG. Your brain is able to use monocular cues to provide depth information when you are looking at the world through one eye.

So where does this misconception come from?  I think it comes down to two things. First, you’re not used to perceiving the world through one eye.  Second, is that under a monocular night vision device your off eye is not closed. This sends competing signals to your brain.  One of the signals is saying “all clear move forward,” and the other is saying “can’t see slow down.”

Of course, I’m not an eye doctor. But In my opinion it’s not really a depth perception thing as much as it is a confidence thing.  The ITS Tactical youtube channel has a great video with John Lovell in which he talks about lessons learned under night vision. He addresses this depth perception subject.

Lovell talks about taking new users through an obstacle course and how the dual tube users generally fair better in the beginning, but after proper training and time, the single tube users are able to hang, no problem. My experience lines up with this, but monoculars are definitely not as natural. They require a bit of conscious effort to get as confident as you would be under a dual tube. 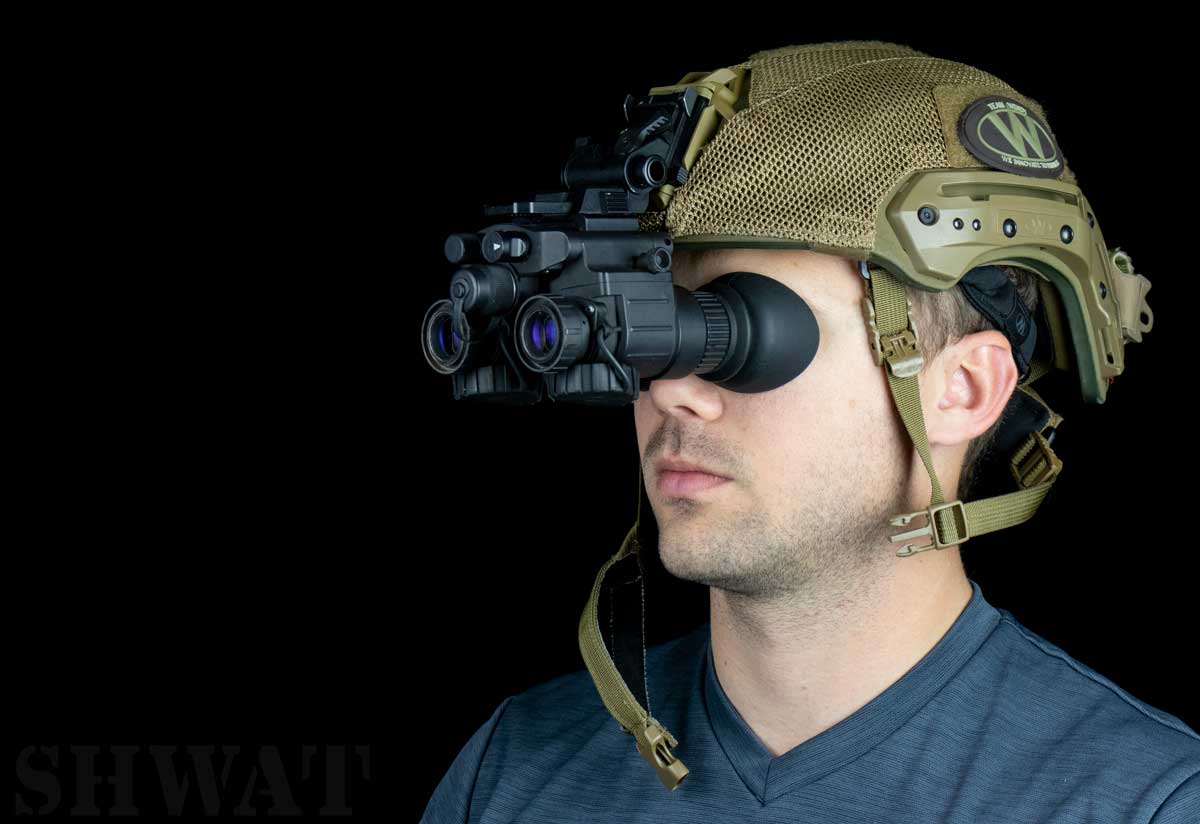 Driving is an area where depth perception would seem to matter a lot. The faster you drive, the more important the information you gather through your eye or eyes becomes.  Under dual tubes it is just so much easier to trust yourself and maneuver with confidence.

I can drive just the same under a single tube, but I have to concentrate more and work up to it. Once I do warm up to it, I am good to go the rest of the night.  Keep in mind, this is my experience driving around in hunting scenarios, not combat scenarios or rally races. As they saw, your mileage may vary, don’t do silly things under the NVGs. NVG Use When Combined with a Thermal Optic

Our hog hunting style involves thermals and night vision equipment.  We prefer to navigate under some sort of helmet mounted night vision, scan for animals with a handheld thermal, and shoot via a weapon mounted thermal.  Hunting like this clearly shapes preferences and my opinions expressed here.

That brings me to my biggest gripe on a binocular setup… Multiple times now I have gotten into position, flipped the FLIR BNVD into the “up position”, took aim through my FLIR 536, and pulled the trigger. The recoil allows the rear of the FLIR 536 to gently touch the front of the BNVD’s in just the right place to turn off the 536…

I know, I know, I should adjust my setup so this doesn’t happen, and that has been done.  I wanted to point that out though, because this has never happened with a single tube setup.  When you are going back and forth between NODs and a weapons mounted thermal, a monocular is a bit easier to manage.

Which is Better for You, Dual or Single Tube NVGs?

The winner here?  If you take price out of the equation I would have to say the BNVDs for me, but at the end of the day both are great options. I’d confidently and happily run either set up. I just can’t say with absolute certainty which you should get without knowing more of your variables. Hopefully, my experiences will help guide your purchasing decision. Now that you know more about how dual tube NVGs stack up against single tube monocular NVGs, my recommendation is to get the one that fits your intended uses and budget.