It’s Fall, 2013 and I’m graciously given a rare AAC 300 Blackout lower. It’s a new caliber, little known in many circles. On paper it looks like a solid hunting round for small to medium sized game, two legged and four legged. Designed in response to Special Operations Forces (SOF) troops requiring a hard hitting, close combat weapon, the 300 Blackout can be effectively suppressed and provide more terminal performance than the standard issue 5.56 while still utilizing the AR-15 platform.

Over the next year I began to Frankenstein the weapon together and naming it Broadsword. We’re talking Legos for Adults essentially. I research the optimum barrel length for my application and end up using a Rainier 14.5” match barrel with a 1:8.5 twist.  Theoretically, this allows me to run varying grains of bullets depending on my “mission” requirements. To date, Broadsword wears the following clothing:

For a nice finished look I add an Orion Design Group camo dip, “Lupus.” It’s now Spring 2014 and my custom built 300 Blackout rifle is essentially field ready. Just like you’d be, I’m more than eager to send some bullets through it.

As luck would have it, the ammo situation is fairly disappointing. I want to feed him 110 grain Barnes Bullets TacTX.  Unable to locate them, I chose Remington 125 grain OTM ammo. Initial tests are delightful to say the least. Broadsword is apparently eager as well, shooting sub-moa groups at 100 yards right out of the gate. 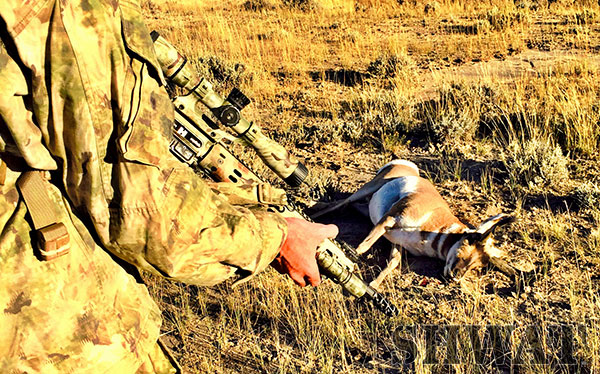 With 100 rounds through him, I am confident with the weapon and Wyoming antelope rifle season is happily here. This is be Broadsword’s first test on a game animal. I am lucky enough to draw a tag in an area well-known to me, a favorite hot spot. A good hunting partner and I leave at zero dark thirty, the hour distance to our location.

As usual, the area develops into a target rich environment at sunrise. Before 9 a.m. we pass on three small bucks and embark on two unsuccessful stalks on larger herd bucks. It is the latter end of the rut and most of the mature Pronghorns are busy herding and chasing smaller satellite bucks away from their prospective ladies.

Anyone who has ever pursued antelope before can attest to the wariness and difficulty these animals present to the hunter. When herded, antelope will congregate in groups of ten plus. Some say they have the equivalent of 8X vision. Coupled with the typical flat open terrain they call home, it can be a daunting task closing to within almost any weapon’s max effective range. Given the foot-pounds of energy my round delivers, I decide that 450 yards is my max for this sized game. Just after noon we glass what looks to be a shooter buck with a herd of does. He is busy chasing two other would be suitors, distracted and in a great location for a stalk. We skull drag ourselves approximately 300 yards across the prairie to the opposite side of a draw and watch as the buck wrangles up his ladies.  All long range shooters know that range estimation is paramount in proper bullet placement. This is even more crucial when using a caliber like the 300 Blackout. Past 200 yards, an error of only ten yards can result in a complete miss. Check out the bullet drop chart here to see what I mean.

I decide to take this antelope and settle into a good prone position. After going through my standard pre shot checklist, which by now is instinctive, I defer to my spotter for a final range estimation. The mature buck stops broadside at exactly 400 yards. The mild 5-10 mph wind tells me to give him 10-12” windage, so I place the reticle on the prescribed location and squeeze the trigger. Due to the inherently mild recoil of the 300 Blackout and distance to target I am able to clearly watch the effects of the round. The buck is literally taken off his feet and lands on his back! I am prepared for a quick follow up shot but it is not needed. We watch for a few minutes as the remaining does run off, followed by one lucky buck flicking his ears at us to saying, “Thanks for taking out the competition!”

We quickly close the distance to our prize for the hunt, my first kill with the 300 Blackout Broadsword. I am most pleased with its performance even  at this caliber’s maximum effective range.

Initial real world experience with the 300 Blackout proves that when used within its proper range of limitations, it is an extremely effective tool for taking game. The proof continues – nine more animals are successfully taken with the Broadsword build and Remington 125 grain OTM ammunition that season. Those stories, the tactics, teamwork and tips will follow here at Special Hunting Weapons And Tactics™. Don’t miss out! Be sure to join our newsletter and forum to stay in the loop.