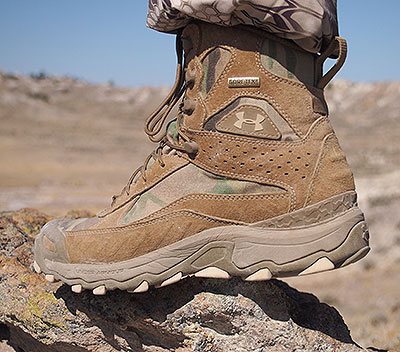 Whether hog hunting or doing tactical training, we need our feet to be comfortable, stable and sure.  Different circumstances call for different boots, so SHWAT™ writers keep testing and reporting back to you here.  Part One introduced the Original Muck Boot, Part Two tested the LaCrosse Venom Scent HD™ Realtree® APG HD® Snake Boots.  Now that we’re up to Part Three of Boots On the Ground, let’s take a look at two very different boots: Under Armour’s Speed Freeks and the LaCrosse Adders.

Under Armor has a big reputation in outerwear, and deservedly so, but I was very interested to discover that the company’s also making tactically-oriented footwear.  I found that out earlier this year when planning for two weeks of hunting out West, first in Wyoming for antelope, followed by an elk hunt in New Mexico.  The hunts promised a good deal of hiking, and I began looking for a pair of rugged, all-terrain boots that didn’t weigh a ton.

I ended up hunting with a pair of Under Armour’s Speed Freeks, a tactical, lightweight (20 ounces per pair) boot that I can’t say enough good things about.  The seven-inch Speed Freeks are tough and rugged and extremely comfortable.  I pounded over a lot of rocky ground and steep slopes for five days in a very warm New Mexico, chasing after elk, and the boots never let me down.   They protected my feet, provided superior traction, and never once pinched or hurt.

Speed Freeks are not made for all conditions.  I wouldn’t wear them in snow and really frigid temperatures, for example, as they lack the kind of insulation I want for colder climates.

Speed Freeks strike me as made for tactical hog hunts over rocky trails and up sheer-sided canyons, in hilly and often downright mountainous terrains, and in drier climates. (Or, at least, in drier times of the year.)  With the solid platform the boots provide, Speed Freeks would also be great for the shooting range as well as for tactical firearms training, and anywhere else where moving and firing are required. My Speed Freeks are done in MultiCam, a green and brown camo pattern, and they also come in black for law enforcement.   The uppers are a combination a woven, Gore-Tex lined material and durable Nubuck leather.  The boots have speed lacing shanks on the uppers for easy on/off without sacrificing a secure fit (the Black versions don’t have the speed lacing shanks, made as they are to meet law enforcement requirements).  A high-abrasion toe cap gives extra durability and protection to the front of the boots, and the durable EVA midsole provides cushioning and shock absorption, in any terrain.   Inside, a molded Ortholite® footbed is designed with a memory foam top and high-rebound foam bottom, for a customized, comfort fit.

I got back from New Mexico fairly worn out.  But my Speed Freeks?  A quick brush off and they appeared darn near new.   I looked and looked and I can’t find a tear, rip, or even a loose thread anywhere on them.  Awesome! Last April, I was in Shelby County, Texas, covering the Wild Hog Roundup sponsored by Wulf Outdoors Sports of Center. Before I hit the thick woods in search of hogs, I asked the good folks at Wulf if they thought I should wear snake boots. The area, after all, not only has booming populations of wild hogs, it’s home to good numbers of rattlesnakes and water moccasins, too.

I got several answers and they all came down to:  Poisonous critters are the real deal here—wear snake boots!

Virginia Solgot, Wulf’s marketing director, went one step further, and gave me a pair of LaCrosse Adder Snake Boots to try out.  I liked the look of the 18-inch Adders, especially that tough leather covering over the shin.   They are one-piece, pull-on, pull-off boots (no zippers), done in Mossy Oak Infinity camouflage.   They have oversized pulls on the sides, and a rear gusset at the top to provide a custom fit.

As you’d expect from a snake boot, Adders have hard, tough surfaces.  That’s what you want to  stop fangs and other sharp objects.  But I did have some concerns that the stiffness of the boots might lead to sore feet and blisters, especially with all the walking I had ahead of me.  Plus, I hadn’t worn the boots at all—no break in time.  My feet would be a-hurting, right?

Dead wrong.  The LaCrosse Adders were comfortable from the first time I used them, which was on a tactical hog hunt that covered several miles of thickly wooded, often very steep East Texas countryside.  Since then, I’ve worn them for hours and hours, kicked through brush, treaded over rocky ground, went up hills and down, and my feet have never squawked once. The waterproof Adders are great in mud, too, which I found out recently during a tactical night hog hunt in West Texas at the Spike Box Ranch. West Texas had been in a severe drought, but darned if it didn’t rain every day I was there. The dirt roads on the Spike Box were often mud slicks, and the gooey earth extended throughout the mesquite and the brush.

LaCrosse made these snake boots with deep and very functional cleats, what the company calls their “Low Lug II non-loading outsole,” and they provide great traction in mud.  They easily shed the heavy clay mud of West Texas, too, so I didn’t have huge balls of wet dirt at the end of my feet as I hiked and hunted.

Now, I must admit, my Adders have not experienced the ultimate test:  a striking rattle snake.  Fortunately!   But at the Spike Box, I trekked through a good deal of cactus, and it seemed that most everything else here had thorns or pickers.   It all bounced off the uppers or crunched underfoot, the steel shank insole providing fine support, but nothing sharp got through.

In fact, when I got home and unpacked, I found an inch-long cactus thorn sticking in the front of one of the Adders.   But it never pierced through the hard shell of these comfortable, easy-wearing boots.

What are your favorite boots? What would you like to see us test?  Let us know on our Facebook Page:  www.facebook.com/SHWATteam.