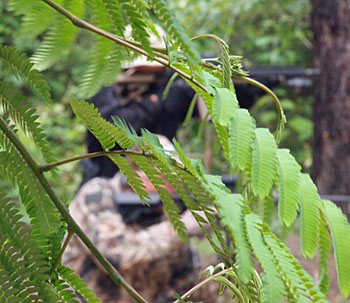 For many the idea of having a tactical mindset for hunting seems a bit of a stretch. For those who work in the warrior realm though, hunting can be as much about training as it is a recreational event.  The tactical points we focus on are pretty clear cut when hunting.  Be it hogs of the four leg or two leg variety.

It is imperative that you have constant situational awareness while hunting hogs.  One reason is that they are generally found in wooded or heavy brush areas.  Many people simply stumble upon hogs.  This can cause you to miss an opportunity at best and get mauled at worst.  Turn on your tactical radar and plug into your surroundings.  Listen, smell, see and feel for your prey.  With this, you will be aware of your target long before it is even aware you are near by.

We have all seen it or done it ourselves.  We rush a shot and quickly jump off the gun to admire our handy work.  Only problem is that the hog is still up and now angry.  Or we simply missed completely.  With every shot we ever take we have two sight pictures.  Our initial picture and our follow up picture.  This keeps us on the gun and allows us to quickly send additional rounds if needed.  Depending on your caliber choice, you may not have any other option than to send multiple rounds downrange.  Even with a .50 BMG caliber Barrett M82 though, I would keep a cheek weld and get my second sight picture.  As I tell students – you should watch your target fall through the scope or sights.  We only come off gun when we know they are down.

Ok…”what the hell does that mean”..right?  There is a Japanese term called Mushin.  It roughly translates to “No Mind”.  What it really means is that you should act with a clear mind.  Do not be distracted by the minutia surrounding your shot.  Be in that moment and act without passion or prejudice. This is a philosophy that can be hard to wrap our heads around.  The best way I can explain it is by equating it to a deer hunt I went on.  I had a friend with a clear shot on a nice buck at less than 70 yards.  The buck was broadside and the sun was at our backs.  No wind or weather of consequence.  Yet when he finally broke the shot he was so low that I thought something was wrong.  The buck startled for a moment then disappeared.  When I asked him what happened, he said he became nervous about missing such an easy shot and the embarrassment that would follow.  He was clearly not experiencing Mushin.  He was distracted and that distraction cost him a prize buck.  Before you make your shot, clear your mind and focus only on the act of breaking the shot.  Be of no mind.

4. See the hunt as training

There are a great number of solid field craft techniques we can practice when we hunt.  Without going overboard, you can get quite a bit of practice during a hog hunt.  I have a friend who is a prior Marine sniper and current dedicated marksman for a SWAT team.  He recently displayed his prize Tom turkey he bagged on opening day.  Upon further inspection I notice that he was covered in mud and wet to the bone.  “Just how did you get this turkey” I inquired.  His answer summarizes my thoughts on hunting and field craft.  He called the turkey into an opening and then low crawled through brush, water and mud to get a better shot. 50 yards of tactical movement got him within a stones throw of this great bird.  Needless to say he did not miss.  I do not expect you to be that extreme in your next hog hunt, but you can certainly practice field craft at every turn in a hunt

In the end, all of the things we do in our world tend to have a tactical edge to them.  It is in our DNA and it is useless to fight it.  Embrace it and let it make your next hunt a more enjoyable and educational event.  I believe we can easily mix these two worlds and be better at both because of it.  Until we hunt or train together, be safe and stay in the fight!