I started handgun hunting about two years ago when the 10MM Auto caliber caught my attention. My first handgun hunts were with 1911 semi-autos chambered in 10MM, and I loved the challenge of hunting up close and personal that the pistols required.

Ever since then, I’ve taken every chance possible to try out new handguns for hunting, and last December I used what quickly became one of my favorite hunting handguns, the Thompson/Center (T/C) G2 Contender Pistol chambered in .44 Rem Mag.

I got to use the G2 Contender Pistol on a media deer hunt sponsored by T/C. We were with the Double T Outfitters near Del Rio, Texas, just across the border from Mexico, and the ranch we hunted was a rolling 16,000 acres of mesquite and greasewood brush, prickly pear cactus and dry, rocky ground.

My hunt started off with a rifle, T/C’s “big brother” version of the handgun, but on Day Three I shot the handgun for the first time. At 50 yards and firing from a rest, my very first three shot group was, admittedly an inch to the right of the bullseye and a couple of inches high. But the group was right at an inch. I was impressed. I made adjustments to my scope and was right on the bullseye.

The G2 Contender is a single-shot handgun. Just pull back on the trigger guard, and the barrel breaks open from the rear. My T/C G2 had a black composite grip and forend, but walnut is also available. Mine was topped with a Leupold VX-3 scope, 2.5-8x32mm. I fired Federal Fusion ammo with a 240 grain bullet.

Barrels are available in either black or stainless finish, and most of the caliber options (there are 11 calibers to choose from) are sold in 12- and 14-inch versions. My G2 had a 14-inch barrel. The trigger was crisp and fairly light—I’d guesstimate the trigger pull right around two pounds. 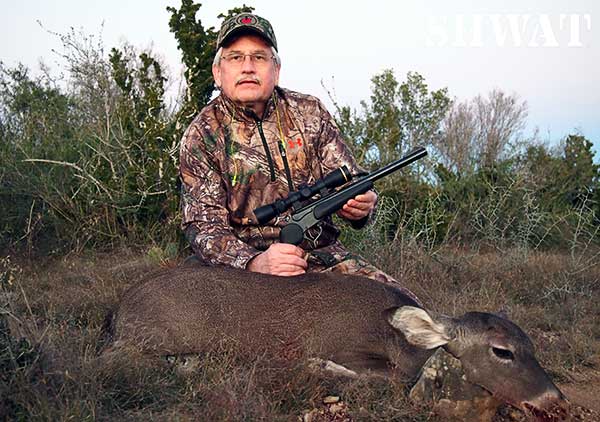 Using the G2 Contender over the next two days, I bagged a doe at 104 yards and a cull buck at 85 yards. The doe dropped right in her tracks. The young buck made it 30 yards before tumbling over into the brush. I took both shots from a position that allowed me to rest the G2’s forearm on a solid rest. The Federal Fusion ammo, I should add, hit very hard and did through-and-through shots on both animals. Internal damage was massive.

Tips? I can shoot the G2 Pistol offhand but it’s tough to line up the scope on a target given the extended eye relief required from a handgun scope. A rest is a much better option, and steadier; an accessory like a Primos Trigger Stick would be a great help while hunting afield.

The barrels come with open sights, too, if that is your preference.

One of the mistakes I made during my early practice with the handgun was holding on way too tight. Well, it’s a .44 Mag, so it’s going to fly out of your hands if you don’t vise-grip it, right? Wrong. Too tight a grip and the handgun began to wobble, making accuracy near impossible.

Hold as you would a revolver, with thumbs folded over each other along the back of the grip and below the hammer, squeeze the trigger, and let the recoil rock back the handgun. It’s only going to move an inch or two.

The G2 Pistol comes fully assembled and can be had in either .22LR or .357 Magnum. Buy one of the 11 different caliber barrels—like a .44 Mag–and you can switch out barrels. There’s even a small lever atop the hammer that lets you shift from centerfire to rimfire operation. That way, you can practice with the .22 rimfire and them switch barrels and ammunition and be ready for bigger game.

The G2 Contender Pistol is versatile, accurate, and a lot of fun to shoot. You can’t ask for more in a hunting handgun.