If there is a Dr. Frankenstein of the shooting world, it is the AR-15 owner. We love to accessorize, modify, and reconfigure our AR-15s. We shorten barrels and switch handguards. We cycle through optics, transplant buttstocks and grips, and change calibers like mad scientists. And then . . .

. . . and then we come to the trigger. The trigger is the heart of the shooter’s interaction with his rifle. We want the best possible triggers in our rifles, but in the pursuit of perfection some shooters to commit horrible crimes against their triggers. In the end, it’s the shooter who pays the price for this. So you are a pretty good kitchen table gunsmith. You understand the AR-15, you even understand how the trigger works. You know what positive, negative, and neutral engagements are, and you know how to identify each. You know the theory behind trigger jobs, how they are done, and what tools you need. Hold ON! Don’t pick up that stone or file yet!

Unless trigger jobs are what you do, don’t mess around with one-off trigger jobs once in a while. It isn’t worth the risk. You run the risk of ruining parts, creating a dangerous trigger, or creating a nonfunctioning trigger.

Better than most, I understand how triggers work on many firearms. I have studied trigger jobs and know how to do them. And how often do I do trigger jobs? Never. I never do them.

Most standard AR-15 triggers are surface-hardened. You may take your fine files and stones to an AR trigger and get the smoothest, lightest trigger ever. Perfect! But you cut through the hardened surface and now wear is accelerated. Then one day that perfect trigger becomes a really scary trigger, and you never saw it coming. 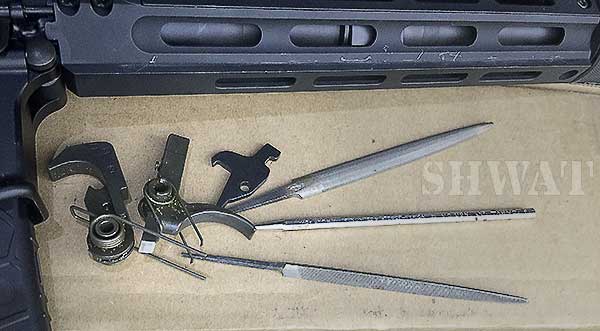 This is where what you forgot comes back to haunt you. You take your new AR to the range and it is love at first shot. Your buddy tries it out and says, “Well, the trigger is a bit heavy, but I know how to fix that; I have all the right tools.”

So you let him take the rifle home and a few days or a few weeks later he brings it back. Sure enough, the trigger feels pretty good. You don’t really know what he did with it, and never really think about it, but it works fine for years and you forget over time that anyone even messed with the trigger. The rifle gets dirty, gets cleaned. Maybe some oil gets a bit old and goopy in the lower. Though you don’t notice, it mixes with some copper shavings and carbon. Then one crisp frosty fall day, or maybe one really hot day, the thing goes, “BANG!” when you least expected it. Or it fires on safe when jarred.

There is some good information on YouTube. There is some pretty bad stuff on there, too. I have seen some crazy YouTube trigger job tutorials, and some decent ones for guns other than AR-15s. Can you tell the difference between fact and fantasy YouTube trigger job tutorials? And I’ll give you a hint – the comments don’t help. Doing a trigger job while watching some random guy on YouTube tell you how is like doing a root canal with a Dremel tool while watching an actor who plays a dentist on TV.

4. Spring Break: Not Always the Beginning of Good Times

I heard Alexander Arms founder Bill Alexander say something interesting: “Think about it – when a good engineer designs a rifle receiver, it is nothing more than a system holding all the right springs in the right places that you need to make the bloody thing work.”

Switching out springs is so easy, even a caveman could it. While not necessarily bad, it may lead to problems. For triggers you can buy heavier springs or lighter springs. You can buy them from different manufactures. The hard part is understanding what the change affects. Everything in the rifle interacts with something else. The trigger interacts with the hammer, which interacts with the disconnector, the firing pin, and also the bolt carrier. The bolt carrier interacts with the bolt, buffer, upper, cam pin, firing pin, gas tube, even the magazine sometimes, and we could go on. So when we start switching springs, we start changing how different systems within the rifle interact, and we can cause unexpected and sometimes hard to diagnose functional issues.

One of the first things I ask when an AR isn’t functioning is, “What springs are in it?” If the owner switched out springs, the springs get switched back and the rifle tested. Often this fixes the problem. Just recently I resolved an issue with a rifle in which one spring in in the trigger group caused the rifle to short-stroke. Springs within a firearm often balance each other and certain parts. When you start changing springs, you can upset the balance.

Now you’re convinced AR-15 trigger jobs are a bad idea so the path forward is clear: Just pick up an aftermarket trigger and put it in. You’re on the right track, but slow down and think for a minute. The problem with aftermarket triggers is that there are so many. Which do you chose?

For hunting or defensive purposes (and for ease of installation), I like keeping them simple. I avoid triggers that are complicated and look like the workings of a Swiss watch. Delicate, complicated and very expensive triggers are fine for some competition shooting, but for hunting and defense, simplicity and reliability are what we want.

I also avoid triggers that require adjustment in the installation. Some can be quite difficult to adjust, or simply very inconvenient, and a lot of shooters never get them adjusted correctly.

Finally, I want an established manufacturer, not the latest trigger making start up company, and certainly not the cheapest.

When looking for an aftermarket trigger, you don’t have to buy the most expensive, but don’t buy the cheapest thing out there. Don’t mess with triggers that need adjustment or that require complex installation. Look for something that drops in easily. And don’t buy a certain trigger just because it is the latest thing that all the guys on a forum or social media are raving about. Chances are, they don’t know anything about triggers and are just jumping on the hype bandwagon. There is only one thing I do to improve an AR-15 trigger: I replace it entirely with an aftermarket trigger. I have used a variety of aftermarket triggers from a number of different manufacturers and installed many more in other people’s rifles. When buying an aftermarket trigger, I want something that I know is a true drop-in installation. I want something with a quality and precision build that’s consistent from trigger to trigger, rifle to rifle. Nothing frustrates me more than installing several of the same brand and model of trigger and finding that each is different than the others.

Last month I installed aftermarket triggers from Timney in two rifles. Timney triggers drop in with no need to adjust or assemble the trigger group. Every trigger is mounted in a lower and tested by a real person prior to leaving the factory. Timney has a proven record, and their performance is consistent from trigger to trigger. They are not the most expensive, nor the cheapest, but they are good, solid triggers that offer everything a hunter or shooter needs – light crisp reliable triggers and easy drop-in installation as a complete unit.

With triggers like that readily available, there’s simply no justification for doing a Frankenstein job on your trigger. There’s no reason to replace reliable function with uncertain outcomes. Don’t be that guy.

Be the guy who does it right, who is never embarrassed, endangered or worse, as a result of an AR-15 trigger job gone bad.