It’s like owning a Ferrari but knowing next to nothing about driving a stick shift. Try owning a finely built precision rifle whose job is long range hunting, but knowing next to nothing about getting the bullet to hit the target 1000 yards downrange. That’s more than a half mile. It’s insane. With that in mind, it was time to shout “Stop the insanity!” and head to Bill Davison’s Precision Rifle Class at Tac Pro Shooting Center. The signature long range class wraps up with a clay pigeon challenge. No, the clays aren’t flying. They are sitting upright 1000 yards downrange.

A little backstory here… Now solidly resting in it’s Cadex Defense Chassis, Grandpa’s formerly neglected Remington 700 now sports a Proof Research carbon fiber wrapped barrel. Topped by a Nightforce NXS 3.5-15 scope, you can certainly see your target well – except for those clay pigeons, but we’ll get to that bit later. Supported alternately by a Harris bipod or Alamo Four Star tripod, my Ferrari of a rifle was stable enough when pulling the Timney trigger. You’d think I’d have some amazing groups. And I did have groups that showed great promise, just not consistently. And if I’m going to shoot feral hogs, elk or anything else at long range, I’m going to have figure that puzzle out.

I’m no sniper. I’m not a competitive shooter. Neither are 95% of the people who read this, who hunt for fun, or simply enjoy the unique challenge of long range shooting. But I do expect a lot from myself, and given the sports car of a rifle King’s Arsenal put together for me, I was honestly frustrated with my lack of driving skills, or consistent tiny groups. Located north of Stephenville, Texas, Tac Pro Shooting Center is an ideal place for almost any class. A 600 acre facility, it’s hosted a plethora of major events from Three Gun matches to private training of international security and military personnel. The fall weather can be ideal in this part of Texas, the rolling hills make for a picturesque place. And some wild hogs roll through periodically…

Day one started in the classroom. A natural facilitator, owner Bill Davison set the class to bantering back and forth with some pretty amazing stories. He’s British, so just listening can be entertaining. A fourteen year veteran of British Special Forces, he’s seen plenty of things yielding real life stories that drive home salient points. An avid hunter across the continents, he understands completely why I’m in his class.

With purpose in mind, Davison walks us through the thought process of gear setup. Everything is purpose driven. Is mobility important? Do I care about weight? Will I be sitting for a long time? How am I going to carry this rifle? Now that’s a good question, because while it is lighter than many of its contemporaries, it isn’t a lightweight hunter. My solution for the moment is my Blackhawk shooting mat that doubles as a backpack style case. 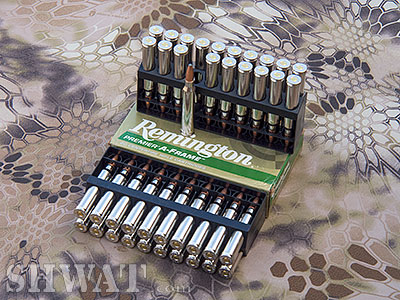 And what about ammo? For this class, match grade is what most people bring. But my purpose is 1000 yard hog hunting, so I’m running 300 Win Mag Remington 180 grain A Frame bullets. These bullets are meant for medium to big game, and I want to shoot a big tough boar at long range. By the end of class, I was convinced that with this ammo I’ll have no problem getting the job done when time comes.

Setting up your rifle to work for you and with you is a complex equation. Even bipod height makes a difference. When we headed for the 100 yard range to set zeros, I discovered that while my bipod was a great height for prone hunting, it was too tall to be ideal for bench rest shooting. Everything was awkward for me at the 100 yard bench rest range.

I finally end up sitting like a six year old on a booster seat at a restaurant, only my booster seat is made of a couple of sand bags! Unlike the six year old, my feet still touch the ground. Oh well, I’m there to learn, to develop skills, not just to look good. Meanwhile, my fellow SHWAT™ Founder Stephen was coolly punching perfectly placed holes in the assigned black dots using the new Remington 700 Tactical Chassis Rifle that SHWAT™ exclusively announced (and will be giving away in a SHWAT Team member appreciation drawing). Yeah, his marksmanship might have been a bit irritating at that moment. Just a bit. With nine of us on the firing line under a corrugated tin roof, I’m reminded why everyone should own a silencer. That roof amplified the concussion from each round fired. Of course everyone has hearing protection, but I’m running the new Specwar 762 silencer from Silencerco/SWR, and loving the quieted report. Not to mention that my .300 Win Mag long action rifle was shooting softer than a classmates .308 with brake! I wish everyone else had silencers. I suspect they wish the same.

As day one wrapped up, I had a new appreciation for the fact that “everything affects the bullet. Everything.” I figured out that cheek weld wasn’t what I thought it was a day earlier. I was shooting consistently at the bottom of my breath. I was feeling pretty good, but that would change.

Remember that perfect fall weather Texas can offer? It was nowhere to be found on day two. Rain on top of rain left the 1000 yard range no fun to be on. So we rescheduled. Six of us made it back.

Like the first day, day two starts in the classroom. Davison starts discussing wind. There’s no voodoo, no magic in long range shooting he insists. Everything is math to him. Everything is predictable. Math, however, was never my favorite subject. Yet Davison is able to simplify things and I’m running quick equations in no time. But hold on, I have a smart phone and apps! Why am I calculating anything anyway? Davison maintains that if you don’t know how things work, when you need to guess, you can’t make an educated guess, a good guess, and get it right. Personally, I’m really glad we went through those exercises. I highly recommend it.

By  midafternoon, we’re at 500 yards and I can no more shoot a decent group than I can give birth. I’ve gone back to prone shooting and should be doing a lot better. Instead, I’ve gone from confident to extremely frustrated. “What’s wrong with me?” I wonder to myself. Davison doesn’t wonder. Remember, when it comes shooting, everything is predicable. Everything. Like rookies messing with their rifles between class dates.

I had good intentions. Really. I’d learned in day one about rifle fit, and had discovered that my scope was mounted too far forward. I’d moved the scope and made some other adjustments to my Cadex Defense chassis. But I failed to properly tighten everything up. After a number of rounds, I had enough movement to really mess things up. Every deviation is multiplied by distance, and it was really obvious now.

So I went from confident to frustrated, and frustrated to  embarrassed. Davison just calmly retrieved some tools and in no time I was hitting the center of a twenty inch steel plate from 500 yards with relative ease. Now I’m confident again.

Shortly thereafter, Davison pulled the class back to 1000 yards. That’s a little more than half a mile. The sun was getting lower in the sky as Davison called corrections for us to dial in our scopes. We’re shooting different ammo in different calibers and have different scopes. Some scopes are in mills, some in MOA. Yet without so much as a period between thoughts, he’s able to get each of us close before we’ve pulled a trigger. It’s very “Jedi Knight” like. Maybe you just had to be there. We shoot that same twenty inch round steel plate, now two minutes of angle (MOA) at 1000 yards. It’s really small in my Nightforce 15x scope. My floating crosshair in my MOAR reticle is coincidentally 2 MOA by 2 MOA, making for great cross hair and target alignment. A bit more fine tuning on the dials, and I’m hitting the center area  consistently.  Now that’s particularly good news, because someday soon that 2 MOA area is going to closely approximate a good sized hog’s vitals at that range.

At this point the sun was getting low enough for us to realize we would soon run out of daylight. Davis identified the clay pigeons he wants each of us to shoot. Right then I make a discovery. I can’t see the clay pigeon when my crosshair covers it!

“You’re right over it, Mate, a minute and a half.”

Laughing, “You’re just left, Mate! You hit the dirt and pushed your clay to the right.”

“Did you aim at it that time?”

I’m happy I could provide such entertainment for Davison. But it was awesome to hear, “There it is! You just chipped it at one o’clock!” After fifteen rounds of this, I’d hit two clays, and couldn’t be happier. Bring on the pigs!

In truth, I still have a lot to learn. A lot. But now I have the mental tool kit to begin to master the process of proficiency, and I’m grateful for the training and instruction. I am whole lot more confident, and more importantly, a whole lot more prepared. This is a whole new game to me, and I’d urge you to give it a shot. And when you do, get some solid training. Like everything else in life, quality varies. Tac Pro is top notch, exactly what I expected it to be. So when you return to SHWAT.com to read of my 1000 yard hog kill – yet to happen at time I’m writing this – you’ll know what made that shot possible.